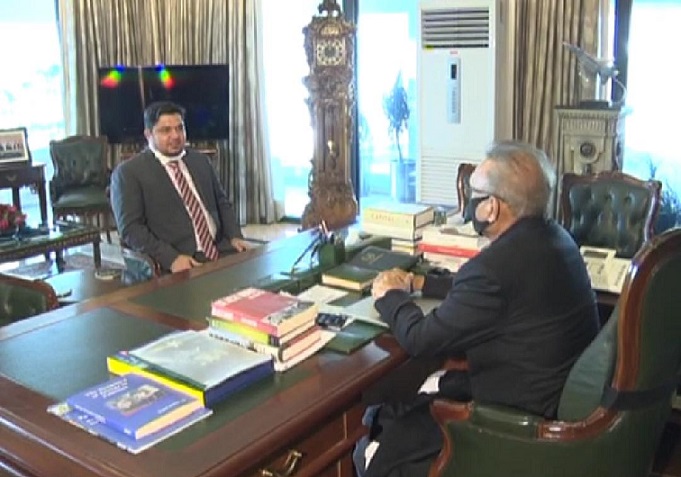 Islamabad: President Pakistan Dr Arif Ur Rehman Alvi said that  Pakistan will continue to support politically, diplomatically and morally to the people of Indian Illegally Occupied Jammu and Kashmir (IIOJK) for their right of self-determination movement.

President Alvi said this while meeting with the President Tehreek-e-Kashmir (TeK) United Kingdom (UK) Raja Fahim Kayani  who called on him at Presidency here.

" We appreciate the role of overseas Pakistanis and Kashmiris who come to support the Kashmiris struggle following the events happened after August 5,2019 in IIOJK. Besides supporting Kashmir cause expatriates are playing pivotal role in the economy of Pakistan while sending remetance," President Alvi added.

President Alvi assured President TeK UK President Kayani that Pakistan wants peace in South Asia and it is now up to the world community to come forward and settle the IIOJK dispute as per the wishes of Kashmiris to bring permanent peace in the sub.continent.

On the occasion TeK President Kayani hailed the role of Pakistan for supporting the Kashmiris freedom struggle saying after August 5,2019 thousands of overseas Pakistanis and Kashmiris came forward in UK and other European countries under the banner TeK UK and Europe to condemn the Indian atrocities and human rights violations in IIOJK.