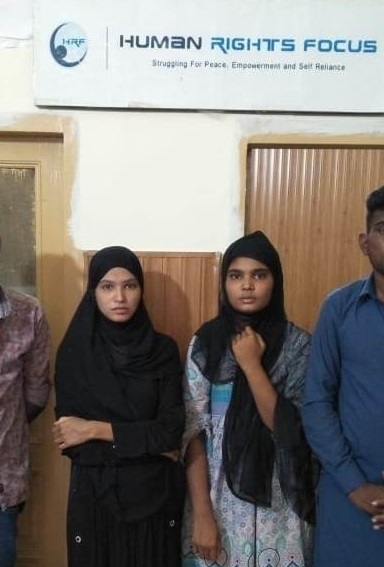 HRFP is also concerned for the issue of Younas Masih murder and keeping proceedings in monitoring being case of brother in law of Asia bibi; Christian woman spent years in prison for false blasphemy charges and freed in May 2019 finally.

Naveed Walter president of Human Rights Focus Pakistan (HRFP) said that after visiting of Zeeshan’s wife Rida & family to HRFP office, their legal proceedings for justice has been started with other possible support since he was arrested on 30th May 2020. He said that, the domestic workers issue is not a new, HRFP is dealing with this issue for years which mostly result an easy targeting of domestic workers for rapes, detentions, harassments, forced conversions and forced marriages when they live at their employer’s homes & at workplaces. Naveed Walter said that, there is a need of new legislations and implementations, he added.

Naveed Walter also said that, in abductions cases of minority girls now the perpetrators are also using social media by making their videos forcefully to minimize the reaction against abductions and using video statements as tools against families and defenders and for proving the girls willingly got married with Muslim boys. He said that the most recent case of minor girl Maira Shehbaz is also an issue of violation in which the age and marriage are challenged; both are not according to the law but still she has neither released nor returned back to home from illegal custody of perpetrators since she abducted on 28th April, 2020 by Muhammad Nikash & allies, he added more. In addition to this issue, Naveed Walter said that, the discrimination against minorities violates the article 36 of the Constitution of Pakistan which guaranteed, “The State shall safeguard the legitimate rights and interests of minorities, including their due representation in the Federal and Provincial services”, he added more.

Naveed Walter said that, Younas Masih got murdered on 25th May, 2020 and it cannot be said in the way the police are claiming that, it is not based on religion or belief. The investigations should be proceed in the context that deceased was brother in law of Asia bibi (Asia’s sister Najma’s husband) and real brother of Asia’s husband Ashiq Masih. He said that, HRFP is monitoring the case proceedings throughout with facts & evidence, and will not let police to make results according to their wills and authorities dictations when Irfan alias Baghu Dogar is also directly involve in this murder and Muhammad Zaulfiqar is an owner of farm where Younas Masih was doing work as peasant and his dead body was found there.

Naveed Walter also said that, the minorities, women, children and marginalized are multiply affecting during COVID-19 pandemic. He said that, the human rights violations and religious victimizations are not stopped even in such a terrible time but still vulnerable are treated differently when all citizens of Pakistan are on a target of invisible enemy of corona virus equally, he added more.