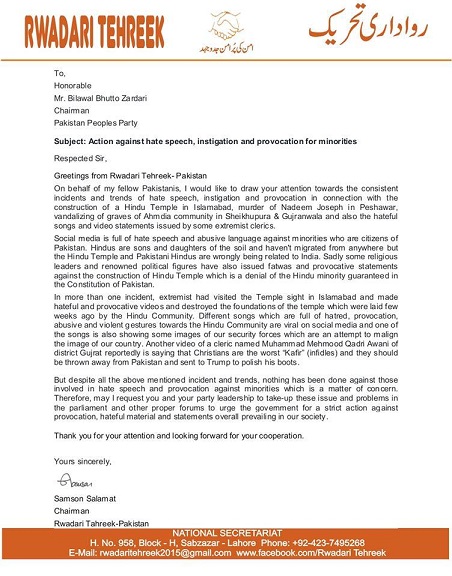 Lahore: In a letter to the heads of mainstream political parties, Rwadari Tehreek calls the attention and support of the political parties to make interventions to draw the attention of the government and relevant state institutions towards the incidents and trends of hate speech towards minorities and the silence of the government as no action has been taken against the hate mongers.

In his letter Mr. Samson Salamat writes that “social media is full of hate speech and abusive language against minorities who are citizens of Pakistan. Hindus are sons and daughters of the soil and haven't migrated from anywhere but the Hindu Temple and Pakistani Hindus are wrongly being related to India. Sadly some religious leaders and renowned political figures have also issued decrees (fatwas) and provocative statements against the construction of Hindu Temple which is a denial of the Hindu minority guaranteed in the Constitution of Pakistan”.

The letter further explains that “in more than one incident, extremist had visited the Temple sight in Islamabad and made hateful and provocative videos and destroyed the foundations of the temple which were laid few weeks ago by the Hindu Community. Different songs which are full of hatred, provocation, abusive and violent gestures towards the Hindu Community are viral on social media and one of the songs is also showing some images of our security forces which are an attempt to malign the image of our country. Another video of a cleric named Muhammad Mehmood Qadri Awani of district Gujrat says that Christians are the worst “Kafir” (infidels) and they should be thrown away from Pakistan and sent to Trump to polish his boots while incidents have been reported from district Sheikhupura and Gujranwala where the graves of Ahmadis were vandalized”.

Chairman Rwadari Tehreek is his letter expresses his disappoint nothing has been done against those involved in hate speech and provocation against minorities which is a matter of concern.  Therefore, Rwadari Tehreek seeks support and attention of the political leadership to take-up these issue and problems in the parliament and other proper forums to urge the government for a strict action against provocation, hateful material and statements.