Zero Tolerance against Hate Speech should be exercised during Moharam: Rwadari Tehreek 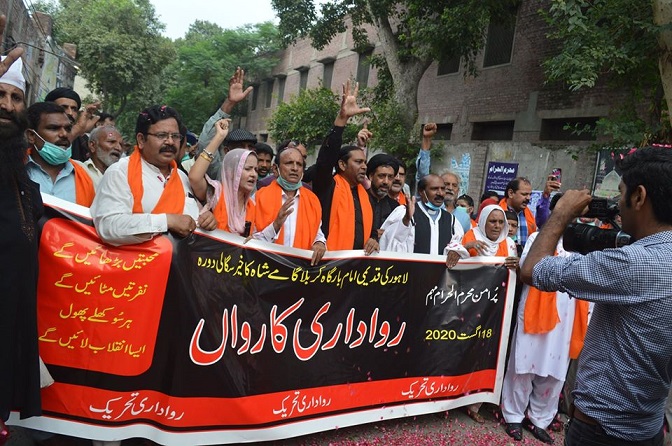 Lahore: Rwadari Tehreek on 18th August, 2020 held an Interfaith Rwadari Caravan of Karbla Gamay Shah (one of the oldest Imam Bargah of Lahore) ahead of the month of Moharam to express togetherness and to deliver a message of peace to refrain from sectarian tensions which has been damaging the nation for last few decades.

Rwadari Caravan began from Dar-ul-Mussarat Lahore and passed through different roads, chanted slogans of peace, and inter-faith harmony and against hate speech. Caravan reached Karbla Gamay Shah where it was overwhelmingly received by the care-takers of Imam Bargah and leadership of the Shia Community.

Mr. Samson Salamat, Chairman Rwadari Tehreek addressing this interfaith moot said that “our country is facing worst internal and external challenges and therefore the maintenance of peaceful environment within our country is vital during the month of Moharam which should be our priority and everyone of us, and all responsible stake-holders need to fulfill their responsibilities without any negligence”.

Rwadari Tehreek suggest that “the Government and the institutions responsible for maintenance of peace and security should exercise “Zero Tolerance” for hate speech and instigation of sectarian violence and ensure fool proof security for all religious gatherings and processions during Mohram” Mr. Samson Salamat added.

Mr. Samson Salamat also appealed to the citizens to refrain from hate speech, instigation and cooperate with the local administration to maintain peace and security”. Hence CORONA SOPs should be followed during the processions and religious gatherings”.

Rwadari Tehreek launches a nationwide campaign to maintain peace and harmony during the holy month of Moharam which has been in practice by Rwadari Tehreek since its beginning in 2015. Moḥarram is the first month of the Islamic calendar and is one of the four sacred months of the year. But it is more significant to the Shia Muslims as they commemorate the martyrdom of Hazrat Imam Hussain, the grandson of the Prophet Muhammad (PBUH), who died at the Battle of Karbla in AD 680.