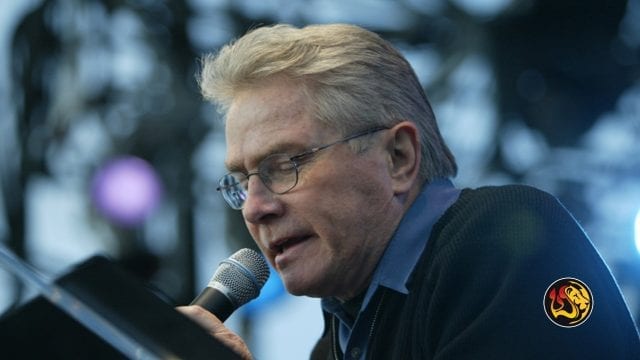 PORTLAND, USA: (Stefan J Bos BosNewsLife)– Luis Palau, the international evangelist who preached the Gospel of Jesus Christ to more than 1 billion people through media and evangelistic events, has died, his family confirmed. The 86-year-old preacher, a close friend of the late evangelist Billy Graham, passed away after a decision to stop all treatment for his incurable lung cancer.

Palau recently returned to his adopted U.S. home in Portland to spend his last days with his family. He had announced in January 2018 that he had been diagnosed with terminal lung cancer. “It is with a mixture of sadness and joy that we share with you that Dad passed away early this morning. He died suddenly and very peacefully, just as he had hoped,” his family said in a statement Thursday. “This is hard news, but Luis is experiencing the beauty of the Lord face to face.”

Palau’s struggle with stage 4 lung cancer was a final chapter to his life story – rising out of poverty to counsel presidents and popes while evangelizing worldwide. For more than 65 years, Palau played an influential role in Christian missions and global evangelism as a powerful speaker, teacher, and author. “His work took him to more than 80 nations. And his campaigns allowed him to present a clear case for Christianity to an audience of more than 1 billion people through television, radio, print, and live events,” his Luis Palau Association said.

Palau, who emigrated as a twenty-something to the United States, would eventually offer the benediction at the official prayer service for U.S. President Bill Clinton’s second inauguration in 1997.

He also prayed regularly with fellow Argentine priest Jorge Mario Bergoglio before he became Pope Francis. He reportedly called the pontiff a real friend of evangelical Christians when Bergoglio was elected pope in 2013.

Originally from Argentina, Palau was born on November 27, 1934, in Ingeniero Maschwitz, a small town outside Argentina’s capital of Buenos Aires. He became a follower of Jesus Christ at the age of 12, just two years after his father’s untimely death. Palau began preaching on street corners as a teenager and hosting his Christian radio program by 19.

He was invited to the United States in 1960 by Ray Stedman, a pastor and missionary leader from Palo Alto, California. He met Palau while in Argentina and began mentoring him. While studying at Multnomah School of the Bible (now Multnomah University) in Portland, Oregon, Luis met his wife, Patricia Scofield. Together they embarked on a life of missions – first going to Latin America and eventually to dozens of nations worldwide.

Palau reportedly spoke in person to 30 million people, including also China, Vietnam, the former Soviet Union, and even back in his birthplace in Buenos Aires, Argentina. Among them a then young reporter of what would become BosNewsLife. Palau met the teenager at the busy temporary newsroom of Amsterdam ’86, the International Conference for Itinerant Evangelists called by then-evangelist Billy Graham.

Sitting on a desk with a jacket nonchalant over his shoulders between typewriters as if he were action hero Zorro, Palau seemed genuinely interested in individuals. However, the humble evangelist defended the sometimes criticized mass evangelism. “Here, I can speak with you about Christ in person. But there I can speak to many about Him at the same time,” he stressed.

“My wish and desire are that people get right with God, settle the big question, and die happy, knowing they will be with Jesus,” Palau said in separate comments.

During the ’70s and ’80s, Palau was one of the few foreign preachers allowed to hold spiritual campaigns within the old Soviet Union. When the iron curtain came down in 1991, he was among the first to have open-air stadiums campaigns in the region.

Similar gatherings in seemingly “closed” nations in the Middle East and Asia also helped break down barriers and set new standards for mass evangelistic efforts. “As a result, the name Luis Palau is now synonymous with innovation, collaboration, and cutting-edge evangelistic models that challenge stereotypes and reach all levels of society,” the Luis Palau Association recalled.

His son Kevin Palau joined the organization’s staff in 1985 and began directing the day-to-day operations in the late 1990s. Under Kevin’s leadership, the Luis Palau Association said it united tens of thousands of churches in hundreds of cities “to love and serve their communities and clearly share the Good News of Jesus.”

Luis Palau’s son Andrew Palau and Andrew’s wife, Wendy, also played “instrumental roles on the team as worldwide evangelists and teachers, proclaiming the Good News of Jesus Christ in person to hundreds of thousands of individuals and to millions digitally,” the organization explained.

The Luis Palau Association, which he founded in 1978, said it would continue his mission “to proclaim the Good News, unite the Church, and impact cities worldwide. Over decades, Luis’s heart and message indelibly shaped a passionate team who remain eager to continue this vital work.”

Luis Palau is survived by his wife, Patricia; his sons Kevin, Keith, Andrew, and Stephen; his daughters-in-law Michelle, Gloria, and Wendy; his sisters Matilde, Martha, Catalina, Margarita, and Ruth; his brother Jorge; 12 grandchildren; “and many beloved extended family,” the Luis Palau Association explained.

A private memorial service was to be held in Palau’s hometown of Portland, Oregon, and will be live-streamed online for the general public at www.luispalau.org, organizers said.