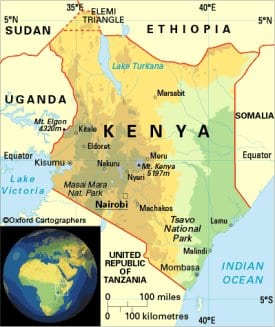 NAIROBI, CHRISTIANS: (Stefan J Bos for BosNewsLife) – Thousands of Christians are among those struggling to survive in northern Kenya after locusts invaded the region, aid workers say.

The latest invasion of locusts reportedly began late January – just at harvest time-devouring field crops, vegetables, cattle fodder, and grazing land in the area. “This blow followed the 2020 plague of locusts, which was the worst for many decades,” added Barnabas Fund, the Christian aid, and advocacy group.

The group said it was seeking “to assist vulnerable Christian families affected by locusts,” including 1,000 families in Mbeere and Embu on “the semi-arid eastern slopes” of Mount Kenya. “The aim is to help these subsistence farmers speedily restore their crop and livestock production. As well as seeds, we will provide fertilizer and appropriate pesticides to deal with the locust eggs left in the soil.”

It stressed that it wanted to halt “the surge in other pests that usually follows after a locust swarm has swept through.” Barnabas Fund and Kenyan project partners are also providing food relief. The aid is “in the form of maize, beans and green grams (mung beans) which are combined to make “getheri”, the staple food of the Mount Kenya region,” explained Barnabas Fund.

“This will help the families survive until August, when the next harvest is due,” in the African nation, the group added. In addition, Christian aid workers are planning to help “farmers store and sell any surplus crops or fodder in a profitable way, so they are no longer exploited by “middlemen”, Barnabas Fund stressed.

“They will also provide the farmers with seedlings of drought-resistant trees – some fruit trees and some fodder trees – choosing varieties suitable for the region. The trees will improve the soil of the farms on this, the dry side of Mount Kenya,” it said. “As a new development for the farmers of Mbeere and Embu, there will be training in how to care for the trees,” the group explained.

Concerns over food security come at a time when the nation is also dealing with the COVID-19 pandemic, high unemployment, crime, and poverty. Droughts also frequently put millions of people at risk. Besides, the Islamist militant Al-Shabab movement, active in Somalia, has been launching a growing number of attacks in Kenya, often targeting Christians.

Larger attacks include the 2013 Westgate shopping mall attack in Nairobi and the 2015 violence at Garissa University College in northwest Kenya.