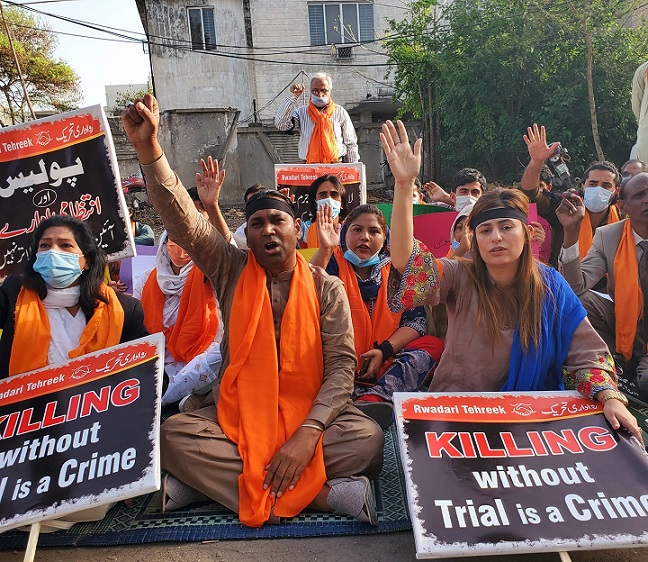 Lahore: Rwadari Tehreek-Pakistan held a protest in front of Lahore Press Club to draw the attention of the Chief Justice of Pakistan, Prime Minister, Chief Ministers, and the Police Chiefs in Baluchistan, Khyber Pakhtunkhwa, Punjab, and Sindh to take stern and concrete action (s) to stop the consistent incidents of police torture, extra- judicial killings and custodial deaths.

The protest was participated by people from different walks of life who chanted slogans against the recent incidents of extra-judicial killings and custodial deaths including the murder of Irfan Jatoi in a fake police encounter in Sukkur, custodial death of 7th class student Jehanzeb at Peshawar, and the killing of 2 accused in a fake-police encounter by Kahna Nau police in Lahore. The protestors demanded judicial inquiry of all the police encounter and extra judicial killings and stern action against those responsible.

While addressing the protestors Chairman Rwadari Tehreek Mr. Samson Salamat said that “we are extremely concerned over the numerous allegations of extra-judicial killings and custodial deaths. Extra-judicial killings are typically the end-point of a string of human rights abuses and are the violation of domestic and international human rights law.

Therefore we urge the federal and provincial governments and relevant departments to take immediate steps to put a halt to the repeated use of the process of abduction or arbitrary arrest, torture and extra-judicial killings and also ensure that the use of fake encounter killings is halted. The most effective way to stop these unlawful acts is to ensure the effective investigation of all allegations of extra-judicial killings through Judicial Commissions and any persons allegedly responsible for such grave human rights abuses must be brought before a civilian court and given a trial in line with international standards and during this process witness protection and adequate reparation must be guaranteed, Mr. Samson Salamat added“.

Mr. Samson Salamat further said that “The Constitution of Pakistan and the law of the land guarantee the right to a fair trial to all the citizens through independent and open court procedures which should be ensured. No individual, institution or department is above the law and everyone is bound to follow the Constitution and law while performing their duties”.