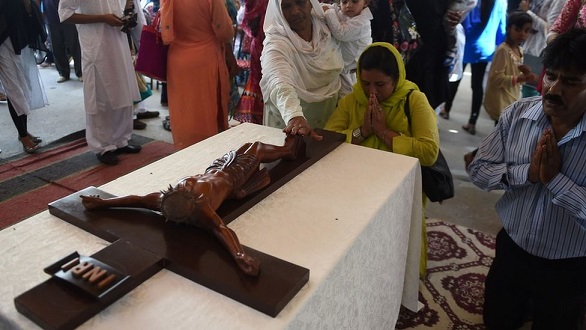 The two Christian Nurses Mariam Lal (staff nurse) and Neush Arooj (student) are charged for blasphemous act due to personal conflict. A coworker head nurse Rukhsana alleged to both nurses that during duties while setting up the cupboard with replacing medicines the both nurses damaged the Islamic religious sticker which was hanged on the cupboard.

Muhammad Waqas a dispenser in same hospital attacked on Nurses with knife and one’s arm was injured but she survived luckily. Police reached and arrested both are in police custody now.

Due to mob’s pressure on 9th April 2021 Police has registered FIR (number 347/21) under section 295-B of Pakistan Penal Code at civil lines police station, Faisalabad on the complaint of Dr. Muhammad Ali who states   to get the information with sanitary inspector Faisal Yaqub next day of happening during round to Fatima Ward (psychiatric) of hospital.

HRFP fact findings team rushed to hospital for immediate actions, talked with colleague nurses, staff of hospital, police and authorities and came to know the exact facts of violations including interviewing with eye witnesses Shamaun, Sameena and Majeed.

Naveed Walter president of HRFP demands to repeal the blasphemy laws, ends up practices and charges on both nurses and ensure their safety & security. He said the false allegations of blasphemy on both nurses has proved again the issues rooted to personal grudges, conflicts on work places and in communities. He said the blasphemy charges effects not only to individuals but to the whole community.

Naveed Walter demands for bring the assailants to justice who attacked on both nurses and falsely alleged and subjected them to violence looks clear through footage Muhammad Waqas claiming but still there are no actions. He said the allegations have led mob violence and extrajudicial killings. HRFP demands authorities to break silence on this issue and take practical steps to ends up practices alleging innocent minorities, HRFP added.