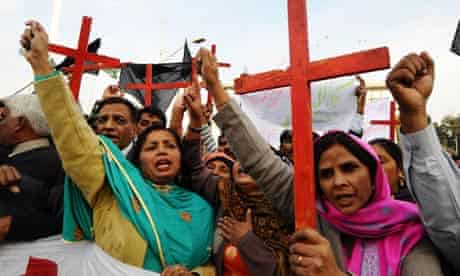 Toronto: (ICV) International Christian Voice is heartbroken at the news of accusations of blasphemy against two Pakistani Christian women, Maryam Lal and Navish Arooj, in Faisalabad, Pakistan today (April 9, 2021). The accusations arose after Navish, a third-year student-nurse, reportedly removed a sticker inscribed with verses from the Holy Quran from a wall at her workplace and allegedly handed it to Maryam, a nurse-in-charge.

An investigation committee was formed at the hospital where a Muslim head nurse and ward boy both claimed to have witnessed Maryam and Navish commit "blasphemous acts" while removing this sticker. The ward boy, Muhammad Waqas, also claims to have been enraged by this and admits to attacking Maryam with a knife, saying he wanted to kill her and that "she was lucky and was only injured" when she fled from the hospital.

A First Information Report (FIR) has now been registered under the Blasphemy Law 295-B against both Maryam and Navish who are in police custody while a formal investigation takes place . This news has led to uproar in the streets of Faisalabad with mobs gathering to call for the execution of these two Christian women while demanding that the Pakistani government take greater action to punish "blasphemers".

The blasphemy laws in Pakistan continue to be used to target Christians and other religious minorities. Too often, vigilante violence overpowers the rule of law in these emotionally charged cases.

Please pray for these two women at this time, that they would be protected while in police custody and that the investigation into their charges is fair and just. Please also remember in your prayers their families and for all other Christians living within the city who are now targets of extremist mobs. May the Lord bring them peace in this tragic situation and deliver them from their persecutors.