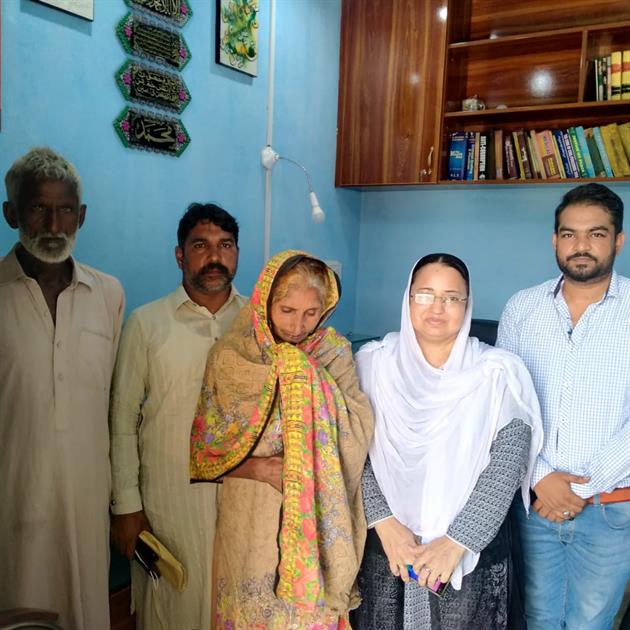 Faisalabad: A 35-year-old Christian labourer known to be a hard worker has been killed by two Muslim men who burst his intestines by inserting high pressure air into his Anus.

It is believed that before he died Shehzad Masih was gang-raped by the two Muslim men.

The brutal use of high-pressure air in such sickening fashion is believed to be have been an attempt to hide the sexual offence the men committed.

A Christian man was brutally murdered by three Muslim coworkers in Pakistan who inserted a pressurized air nozzle into his anus after they had first sodomised him. It is believed that the men may have inserted the air nozzle to remove evidence of their sexual assault.

The attack occurred in the residence provided to labourer Shehzad (35 yrs) within the compound of the bora [bag] factory he was employed with. He took up residence at his new place of work which he had only started 15 days ago to prevent the daily 70km journey he would have to undertake to get back to his parents’ home.

For two weeks his parents had been very excited for their son who is well known for being a hard-working innocent man. He had been seeking work for a short while and this new job paid well and came with free accommodation. Mother Shareefa Bibi (62 yrs) was extremely grateful to three local Muslim friends Mr Mohammed Faisal, Mr Mohammed Fiazan and Mr Mohammed Abdullah who had told Shehzad about the work, helped him meet with the employer, and assisted in his gaining of the role.

So it came as a shock to them when on 19th June 2020 at around 2am they heard loud knocking on the door and saw Mr Faisal, hollering to them to come down and open their door urgently. The family invited him into their home and were told that Shehzad had eaten contaminated food and had a very bad stomach. They explained that his condition was critical due to a very bad infection.

Father Younis Masih (65 yrs) was working later the same day and had to care for his daughter Humaira (25 yrs) who they did not want to leave home alone. So mother Shareefa and her younger son Irfan Masih (30 yrs) travelled to Allied Hospital Faisalabad where they were met by Mr Muhammed Touseef the personal assistant to the owner of the bag factory a Mr Muhammed Asad. There the mother broke down in tears and began screaming hysterically when she found her son battling for his life. A doctor informed the two family members that Irfan had burst his intestine and explained that it seemed that compressed air had been inserted into his intestine through a nozzle that had been forcefully shoved into his anus. The medical team made it very clear that the chances of survival for Shehzad were minimal because his rectum had been badly torn. Mr Touseef attempted to reasure the family and explained that the employer would bear the costs for hospital treatment. He agreed to investigate the report from the doctors and to see if any foul play had occurred while Shehzad was at the factory. At the time he seemed completely unaware of the attack on Shehzad and who was involved.

Faisal arrived later and helped Mr Touseef reassure the family and convince them that everything would be ok.

Doctors sought permission for an immediate operation as Shehzad was still unconscious and Shareefa and her son Irfan authorised the procedure and waited outside the ward for news. Up until this point the Mr Touseef and Mr Faisal had been very helpful and seemed very concerned about Shehzad. When the mother asked them about any attack Shehzad may have suffered they expressed no knowledge of any such occurrence. They said that when they found Shehzad he had been complaining about food he had eaten and the pain that potential food poisoning was inducing. They left for their homes while the procedure was underway and told Shareefa and Irfan that they would return sometime later in the day after catching up with their sleep.

Around 5 hours after Shehzad Masih had his operation he woke from his state of unconscious. He was weak but pleased to see his mother and brother and he began crying. With tears streaming down his cheeks, he informed his mother and brother that he had been sodomised by the two men that had brought him to the hospital and called at his family home. He explained that the owner of the bag factory was also involved and that the three men then tortured him by inserting an air nozzle into his anus which had caused him extreme pain. He explained that he had remonstrated with them not to sexually assault him but they pursued their desire and that when the pain of the pressurized air became too much that they ignored his screams of pain and his yelling for them to stop.

While he was talking to his family Shehzad's health suddenly worsened and he was placed on a ventilator due to breathing problems. He died only hours later succumbing to his afflicted body at around 2pm on 20th June 2021.

Shareefa Bibi, shared her account with BACA, she said:

"When I reached hospital, I was shocked to see my strong son looking so frail and close to dying.

"The employers of my son were present there and pretending to help us but they had been trying to fool all parties by telling different accounts.

"These men knew what happened and were lying and promising help to us while in the presence of my dying son - it makes me sick when I think about this."

"Before taking my signature as a family representative a nurse asked me if I understood what had happened.

"When I replied no, she explained that pressurized air had blown up my sons intestines after a nozzle had been shoved into his anus.

“I was horrified, but had no time to dwell on this matter as doctors had to start operating quickly after my authorisation.

"I just wet and prayed with Irfan (younger son) and waited for a response from the doctors."

Grief-stricken and in pain Shareefa and her son went to the police booth inside the hospital and reported their sons death. A First Information Report (FIR) was registered the same day and the culprits were arrested from the factory and are now in the custody of the police. During the police investigation it was revealed that hospital staff had been informed of a brutal attack on Shehzad when they communicated with Mr Touseef who had brought Shehzad to the hospital and tried to assume authority for the patient’s treatment.

It was only on the insistence of hospital staff that Mr Touseef then called the perpetrators and asked them to inform the parents of Shehzad's critical health and to advise them to get to hospital as soon as possible to authorise treatment. It is believed that if hospital staff did not challenge the authority of Mohammed Touseef and demand the presence of family members that the family would never have known about the actual incident. This suggests that Mr Touseef was collaborating with the perpetrators and it is believed his actions may have been to protect the name of the company as the sexual assault and violence occurred on their property. Worse still Mr Touseef had advised the sodomists that he would organise a compromise deal with the family, while telling the parents he would investigate the attack on Shehzad and bring the culprits to justice. Mr Touseef's devious approach to resolving the matter also involved lying to medical staff that he was representing the family and that he had agreed a compromise deal (under Pakistan's Qisas and Diyas laws you can buy your acquital by paying a compensatory sum to families of murdered victims) between them and the three murderers.

The culprits come from influential families and associates have already been threatening Younis Masih to drop the case or face retribution.

On 29th June while his parents were at court Irfan Masih was called by associates of Mr Asad who held a meeting with him to one of their offices and asked him to bring his parents and receive a Rs. 500,000 bribe to exclude Mohmmad Asad from the police investigation.

“I shall never forgive the murderers of my son.

"No money can compensate for the life of my eldest son who always cared for us and worked hard to feed our family.

"I will not accept anything less than justice for Shehzad."

An initial court hearing was due on 29th June 2021, however the lead investigating officer hadn’t submitted the charge sheet to Session Court Faisalabad on time. An alternative was set for 3rd July and police had again failed to present the charge sheet to court, which our legal representative believes is due to corruption. The Judge Javed Ashraf made a court order to the investigating officer to complete his charge sheet and submit it to the court without delay on 7th July. Today at court once again the police have failed to produce a charge sheet although the murderers are still under arrest and jailed at Tekhri wala Police Station, Faisalabad. The court has ordered that the charge sheet be completed by 4pm this afternoon and then submitted to court before 10th July for the next hearing.

British Asian Christian Association met with the family on 3rd July and were chosen from a range charities to provide a solicitor in order to obtain justice for Shehzad. Our advocate is Miss Taswar Tallat Almas Rana and she is ensuring the family is getting a prompt response from police and the courts to ensure that justice ensues. Thus far the murderers have not applied for bail but having ensured early legal protection for the family of Shehzad we believe our advocate can defeat any application for bail. The owner of the factory Mr Asad has been implicated in his attempts to protect the murders to preserve the reputation of his company and attempts are being made to include his associate Mr Touseef for the duping of the family and the medical team at Allied Hospital.

In the office of Miss Rana Shareefa said:

"About a month ago, Shehzad informed me of his co workers bullying him over his Christian faith resulting in a heated argument.

"Christians are vulnerable and I believe these men conducted their sodomy of my son because they knew they could attack him with impunity due to cultural bias."

To date a post-mortem has not been viewed by the family, our advocate or the courts and such delay leads us to believe that there are attempts being made to falsify information.

"A young man has lost his life in a horrific act of sexual depravity and violence no doubt targeted because of his Christian vulnerability.

"In this case we have been lucky to have begun legal advocacy early so we are hoping to once again ensure justice for this Christian family."