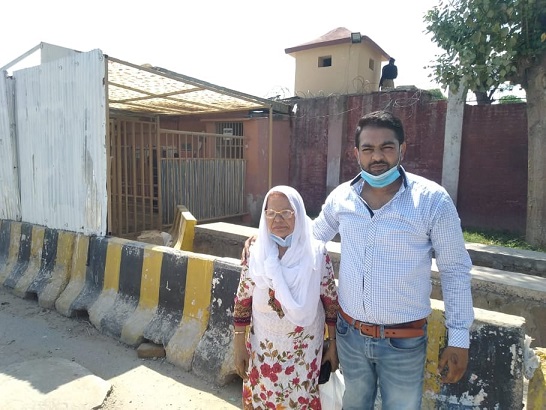 Pakistan: The plight of an elderly Blasphemy victim whose farcical charges for blasphemy should never have stood has been exacerbated by yet another refusal of his appeal.

The conviction for Zafar Bhatti (58 yrs) is based on a Muslim witness testimony who was not present at the time of the blasphemy. Moreover the phone and SIM from which blasphemous texts appeared where not even from the phone of Zafar Bhatti. Furthermore he is illiterate and could not have texted in English the language used for the blasphemous texts. Mr Bhatti has lost 9 years of his life to a cruel and undeserved punishment and finds himself looking at being detained for more time yet.

Zafar Bhatti has been living in isolated confinement within the decrepit Adiala Jail, Rawalpindi and is now exhibiting poor physical and mental health.

Despite serious health issues, Zafar Bhatti has previously not been granted bail though the constitution of Pakistan allows it. A serious attempt was made to gain bail for Zafar on medical grounds for several years, his condition was ignored by the court, whereas bail has been granted to Muslims who have committed more heinous crimes. Instead the Judge asked the solicitor team to apply for an appeal that was due to Zafar Bhatti.

However, In a special court hearing at Adiala Jail on Monday 28th June, Judge Sahibzada Naqeeb Shezad denied Mr Bhatti his appeal but also quoshed an application by the complainant counsel to impose a death sentence on Zafar Bhatti. So for now Mr Bhatti will continue with his life sentence.

Refusal of bail flies in the face of a lot of progress made during the appeal process for Mr Bhatti. In fact on 22nd April 2021, The Additional Sessions Judge at Rawalpindi District Court, ordered the Police Department of New Town Rawalpindi to submit a sonographic test report of the voices used for the sim activation of the culprit phone, against the voice of Mr Bhatti recorded in the presence of the Magistrate. The recordings were submitted to the Cyber Crime Wing of the Federal Investigation Agency (FIA) who concluded that there was no match.

One positive outcome to share with you is that Mr Bhatti, whose sight had been diminshing and who bleeding eyes has undergone surgery. Doctors have said that severe diabetes and high blood pressure had contributed to the condition but after the medical procedure undertaken on Friday 9th July Mr Bhatti's eyesight is recovering slowly.

Mr Bhatti will also be undergoing heart surgery for coronary artery disease on 17th July and he is calling for prayer for a successful opperation.

Today on 15th July our Operations Manager and field officer met with Zafar Bhatti and shared prayers and fellowship with him. They have discussed the ongoing legal matter and it is believed that a further application is being made bail. If this does not result in freedom for Zafar Bhatti within a month he has agreed to allow British Asian Christian Association to take over hus case. Please pray for the success of the bail application for Zafar Bhatti whichever means it is gained through.

We continue to support Zafar Bhatti and his wife financially and have recently added to our support by helping the elderly wife of Zafar move to a new home after she was threatened with eviction. Moreover we have also helped her with Physiotherapy since she fell over while shopping for food to cook meals for Zafar during her vist to him in jail. Nawab Bibi (72 yrs) has responded well to her physiotherapy and is moving a lot more fluidly and with less pain now. Read more (here).

"We at BACA are all heartbroken by news of the failed appeal for Zafar Bhatti.

"The result is a real travesty of justice considering the extremely weak case that has resulted in Mr Bhatti's near 10 year incarceration.

"Mr Bhatti and his wife are in very poor health and we continue to support them through this difficult time.

"We thank God for the strength and testimony of the couple who are not embittered or hatreful despite the cruel treatment that has befallen them.

"They are both more of a strength to us than we to them."