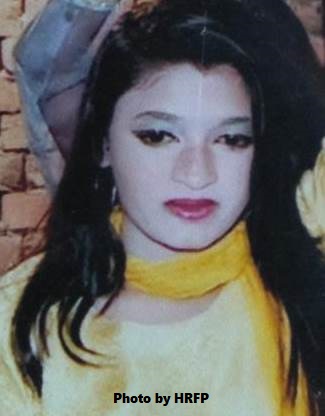 Chashman Kanwal was kidnapped on 27 July 2021, around 8:00 am when her father Gulzar Masih dropped her at Government Higher Secondary School Samanabad Faisalabad as usual. That day when she didn't come back  home, Gulzar Masih and family started searching for her but they didn’t find her.

On same night Gulzar Masih gave an application to the concerned Police Station Faisalabad that his daughter is missing. First Information Report (FIR # 622/21) was registered in the local police station on 28 July 2021 but there were no further developments.

On 29 July 2021, Police called Gulzar Masih and told that Chashman has embraced Islam. Police gave the documents to her family with a content at letter head of religious Islamic group “Pakistan Sunni Tehreek” located in Johar Town GT Road Sahiwal (district office) mentioning that Chashman has converted to Islam and got married to Muhammad Usman. Her statement also issued that she has been willingly converted to Islam and got married to Muhammad Usman. She also accepted her new Muslim name, Ayesha bibi. Her age is mentioned as 19 on the marriage certificate as in such cases the abductors with religious supporters try to make the victim look older than their actual age.

HRFP fact finding team visited the house of victim and met with Gulzar Masih and family. Gulzar Masih informs the HRFP team that their daughter Chashman has abducted, forcefully converted and forcibly married the abductor. They also informed the HRFP that all the statements of her getting married to him willingly are absolutely fake. Gulzar Masih appealed for justice and demanded her daughter to be back home. The family is under threats and HRFP have ensured them for legal actions with other possible assistance they need.

Naveed Walter, president of Human Rights Focus Pakistan (HRFP) said that, the abductions, forced conversion and forced marriage has not been stopped or noticed by authorities instead it is rising everyday even more. Chashman is another example where a minor girl is abducted and falsely showing her as she took the decision of her conversion willingly.

Naveed Walter also said that, HRFP has experienced many cases, where the case has been brought through courts and the court ignores government data (NADRA) and prefer the Islamic ideology about their maturity. He raised the question on law that why only a minor’s statement is accepted in courts in the cases of conversions. He further added that, in Pakistan the under-aged person cannot cast a vote, cannot get an ID card, cannot get a driving license but they could get married and can change religion, when it is the most important decision of life they would make in their minor age.

Human Rights Focus Pakistan (HRFP) is highly concerned about free & fair trials of minor girls for their justice processes and demands a strong step to be taken against this issue. The mind set of people and before it there is a need to sensitize the decision makers, sitting government ministers and authorities as many have opposed the bills about child marriage and other bills in favor of minorities. Just like the most recent statement of minister for religious affairs that, the law should not restrict a person to change religion before the age of 18 and they could not support a restriction on religious conversion before 18 years of age, HRFP added.

Human Rights Focus Pakistan (HRFP) has mentioned over and over again that when a Pakistani Muslim person is not allowed to change religion and if someone does they called them ‘murtad’ then why the non-Muslims would be forcefully converted.

Human Rights Focus Pakistan (HRFP) urged authorities to stop the provision of shelter & safe way to abductors & rapists under the name of marriage & conversions as they using it as tools to save themselves from the punishment of rape, abduction, forced marriage & forced conversion of underage minority girls. Moreover, only a mature person above 18 belonging to any religion could be allowed to change their religion and after appearing before an additional session’s judge of the area, HRFP added!