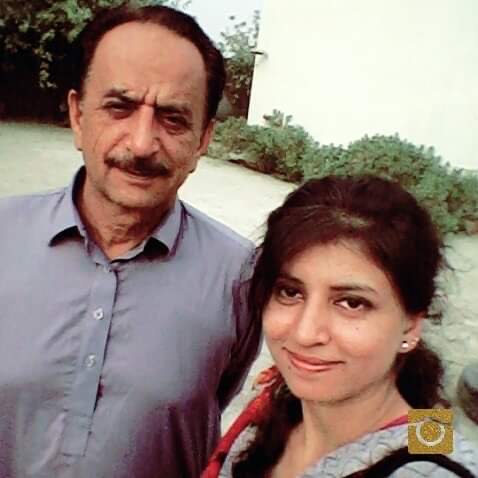 Canada: (Ahmar Mustikan) She ardently believes her dad Zafar Lund, 59, was shot dead not because he was an Ahmadi but because he was mobilizing the local masses against the biggest land mafia in the country, Pakistan army.

Ramla Zafar, 26, originally from the Saraiki belt of Southern Punjab in Pakistan, has courage and something in her possession no women in the world has—blood-drenched hair of her assassinated father, Zafar Lund.

Lund, 59, was the executive director of the Hirrak Development Center, a sustainable development non-governmental organization and founder of Sindhoo Bachao Tarla, a grassroots movement to save the nearly 2000-mile long River Indus.

His cardinal sin was leading the popular resistance in Southern Punjab against grabbing of tens of thousands of acres of pastoral lands, called rahkooks, by Pakistan army generals.

Local activists who worked with Lund said they were preparing for a rally in the last week of July when he was snuffed out.

The “Rakh” (common grazing land in Thal) was allotted to the Pakistan army so that they can do their war training. “You could see bullet shells on these grazing lands. Army played their war games on the Rakh,” one of the organizers said requesting anonymity.

Scores of indigenous people living on those Rakh lands were displaced because of the controversial allotments. The proposed rally was expected to be huge as affected people of a coal power project in Muzaffargarh were planning to participate.

Ramla, a food safety specialist who now lives with her eldest brother Shahik Khan in Penticton, British Columbia, says people knew her dad as a resistance leader against corrupt authorities. She says that her dad paid the ultimate price for rallying against the controversial land allotments to Pakistan army generals.

In an unconnected hearing, the Chief Justice of the Lahore High Court Mohammed Qasim Khan this spring declared that Pakistan army has become the biggest land grabber in the country. The premier Human Rights Watch has also documented the brutal methods Pakistan soldiers employ to occupy farmlands illegally.

“Why would ISI agents visit an NGO worker? On many occasions he told us (upon asking if we were at his office) that this guy who just visited was an ISI agent,” Ramla protests.

She argues that the July 14, 2016 murder of her dad in Kot Addu, Muzzafargarh was wrongly claimed to be religious in nature—Lund’s dad Rasheed Ahmed Khan was a devout Ahmadi, a persecuted but highly educated Muslim sect that premier Zulfikar Ali Bhutto declared heretic in 1974 to appease Pakistan’s mainstream mullahs. She said had religious hatred been the primary motivation then the killers would have targeted her elder brother Rawal, who was the first to face the two killers masquerading as job seekers, instead of asking him to wake up her dad from his afternoon nap.

“There were many madressas (seminaries) in Kot Addu and all of them knew that my dad was liberal. They were not a threat when dad rallied against the Taliban (probably in 2012). Suddenly it became a religious issue. I don’t buy it,” she said.

She said the late Balochistan politician Mir Hasil Bizenjo, who was a federal minister for ports and shipping in the government of Premier Nawaz Sharif and a personal and political friend of her dad since their days together at Karachi University in the early 1980s, had visited with the bereaved family for condolences. When asked if the killers were even “approachable”—meaning the army, who act as judge, jury and executioner in Pakistan—, Bizenjo replied he too had a similar feeling.In fact, Bizenjo had joined hands with Lund in protests against land allotments to army generals in Kot Addu Tehsil. Bizenjo’s National Party and Lund’s Sindhoo Bachao Tarla had coalesced with other local Seraiki organizations Rakh Bachao Committee, Halli Sanjh, Taraimet Sanjh, and Seraiki Lok Party to stop land allotments to the army generals.

In the last major elections of his life for the chairmanship of Pakistan’s upper House of Parliament, called the Senate, Bizenjo, who died August last year, got defeated due to the machinations of now outgoing ISI chief, Lt Gen Faiz Hameed. Since Pakistan is a garrison state, the ISI chief is the considered to be the second most powerful man in the country after the army chief, presently Gen Qamar Bajwa.

Ramla is convinced the killers of her dad were professional hitmen. “Had it been out of religious hatred, they wouldn’t have used a silenced gun. They planned it.”

Austria educated Shahik Khan, Ramla’s eldest brother, said his dad had told him in mid-2015, a year before his assassination, that he might get killed and in case that happens to take care of the family. “I asked who are they? He did not say anything. Later, my dad said when Benazir Bhutto is killed how can anyone else be safe!” said Khan, who has Masters in Energy Informatics from Upper Austria University of Applied Sciences. Twice premier Bhutto, who was the first woman head of government of a Muslim state, was killed December 2008 in Rawalpindi in a suicide bombing by elements possibly linked to the powerful army.

Ramla said her dad “was threatened before he was murdered. Religious murderers don’t give a warning, they just kill. The warning before crime is meant to warn a target not to do something that he is about to do—rally against the army’s land grab.”

Just a day before his slaying, Ramla recalls her dad had sent her off at the local bus station along with her youngest sibling Shehmeer, aunts and cousins, for vacationing at a hill station.

But the very next day, she received a call from home asking her to return as her dad had been shot dead. She described the last time she saw her slain dad at their Kot Addu home. “There was a hole from the bullet under his eye. His face was intact and (there was) no expressions as if he was sleeping. I saw (a lump of) his hair next to his head and I took it and saved it. I still have his blood-drenched hair.”

Since Lund was buried at the Ahmadi graveyard in Dera Ghazi Khan, local media published unsubstantiated reports that he was gunned down to due to his Ahmadi faith.

Lund was irreverent towards religion but believed in secularism, his friends from his Karachi university days, including this scribe, can confirm. “He was beyond religion,” says eldest son Shahik Khan. The fact that Lund named his only daughter Ramla—a mix of Ram and Allah, the names of Hindu and Muslim Gods—showed he was irreligious, praying only once in a year on Muslim Christmas, called Eid.

Ramla regretted that the media portrayal of her dad as an Ahmadi negated his lifelong struggle for the Saraiki “wasaib”— land, language and culture movement in Southern Punjab.

“His identity was not of an Ahmadi man, but of a resistance fighter against land mafia and corrupt institutions,” Ramla says with pride. “He laid the foundation of Saraiki movement against the “Takht Lahore,” the rulers of Punjab based in capital Lahore. He was working for indigenous people’s rights living in the Indus Valley.”

Even on the last day of his life, Lund had posted on his Facebook page news items that exposed the workings of Pakistan deep state. One posted news item has the headline, “Pakistan failed to counter terrorists: US legislators”; a second news post reads “Enlist Pakistan as state sponsor of terrorism: US Congress committee”; and a third news item has the picture of ISI-backed Afghan warlord Jalaluddin Haqqani, an ally of Osama bin Laden and reads “The Double Game — The New Yorker.”