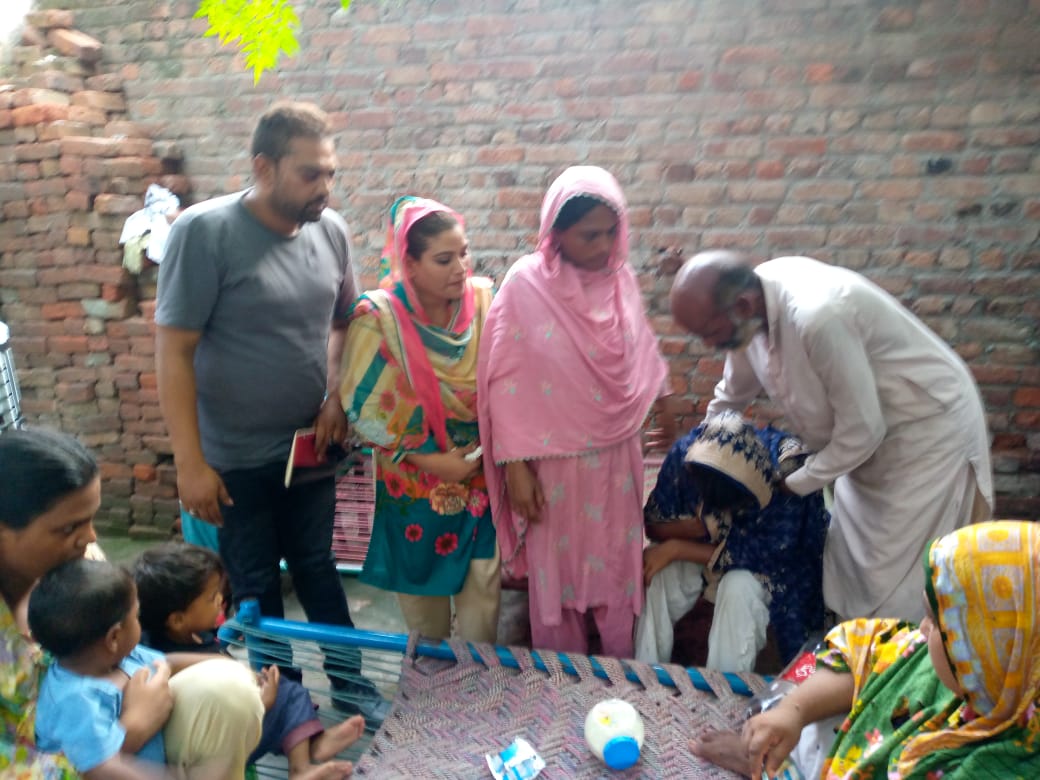 London: (By Hannah Chowdhry) Rimsha is depressed but is getting support from her family.

A Christian woman was raped by her Muslim employer, who sent for her to go to his private quarters at the end of her work shift.

After the ordeal the woman’s family still reeling from news of the sexual assault, were met by an armed gang at their home the following morning demanding they all go back to work.

Rimsha Riaz (18 yrs) was employed in a glass crushing company alongside members of her family all of whom were hard-working loyal employees for Haji Kbar Ali, a successful Muslim businessman.   Mumtaz Bibi (wearing pink)  with her daughter Rimsha (wearing blue). Members of the family  turned up for work as usual on 6th July 2022 and after a tiresome shift they were all ready to go home.  As they were all packing up and getting ready to leave a messenger was sent from the offices of Mr Ali calling for the attendance of Rimsha Riaz for some extra work that was required.

The time was around 7.30pm so her mother Mumtaz Bibi (how old), brother Arslan (17 yrs) and oldest brother Adnan (25 yrs) returned home.

About an hour later Rimsha arrived home and was visibly distressed.  Her mother asked her about the work Rimsha had done for Mr Ali, at which pint she broke out into tears and informed her family that she had been raped at gunpoint.  The family are still coming to terms with the attack. Rimsha  spoke with BACA about the attack, she said:

“In his office, Mr Ali pulled out his pistol threatened to kill me if I did not do what he wanted.

“He then started raping me.

“I cried out as loud as I could but  no-one came to help.

“After he finished with me, Mr Ali put the pistol to my ear and threatened to kill my brothers and other family members, if I dared to tell anyone.”

When Mr Akbar had completed his rape and threat he sat down and let Rimsha go.   Rimsha took the opportunity to redress herself and ran all the way home.

Her mother instructed the family not to go back to work ever again but did not go to police, because Christian families are generally frightened of them, and expect little justice.

After two days however, on 8th July, Mr Ali arrived at their home in the evening with a four armed men and rapped loudly on their door with the butt of his pistol. Mr Ali shouted out to the family that they should open the door or face dire consequences. Rimsha’s brother Arslan opened the door frightened of what might happen to the family and was shocked to see all the armed men.  The family are fearful of the Muslim employer but are praying for justice. Arslan told us that Mr Ali was drunk when he arrived and abused him and other family members verbally.  He demanded that they all return back to work and threatened to kill them if they failed to arrive the next day.

Arslan told him that they had left the work and would not be returning to the factory anymore. At this Mr Ali furiously shouted:

“How dare you leave my factory without my permission?

“I will kill you if you remain absent tomorrow and make sure you bring the girl.”

The whole family was left terrified and when he left the family began discussing what they should do. While they were planning what to do, Rimsha who was very distressed fainted and collapsed on the floor.  Her brother Arslan took her to District Headquarters Hospital, Gujranwala where she received treatment and a diagnosis confirmed she had been raped.

Back in the family home, Mumtaz Bibi called a close relative to ask what she should do.  He advised her to go to her local police station and report the rape and the threats.

That evening Mumtaz Bibi travelleed to Jandiala Baghwala Police Station with her relative and filed an application against Mr Ali for raping her daughter.

The next morning arrested the culprit from his factory and registered a First Information Report – FIR No.994/22, on charges of rape undersection  376 of the Pakistan Penal Code.

a term which shall not be less than ten rears or more, than twenty-five years and shall also be

(2) When rape is committed by two or more persons in furtherance of common intention of all,

each of such persons shall be punished with death or imprisonment for life.”

Despite the fact that police have arrested the culprit the family is still is in trauma and fear. Mumtaz Bibi has left her rented house in Gujanranwala and moved to a distant place at the home of her sister.

Unfortunately for Rimsha who was engaged to be married, her fiancé has now  broken the engagement on discovering the rape incident. Rimsha is visibly traumatized and depressed.

“Rimsha is a Christian women in a country where her status makes her vulnerable.

“The fact that the rapist employer felt he could force Rimsha and her family to return to work after such an ordeal, is an illustration of the weak standing of Christians.

“In 2014, a damning report by an Islamic NGO ‘Movement of Solidarity and Peace’ reported that 700 Christian women every year are abducted, raped and forced into Islamic marriage. .

“This statistic does not take into count crimes of just rape – which if included would paint an even more devastating picture.

“Pakistani authorities must build in better protection for Christian women within their existing structures, or this social malaise will continue to grow.”  The family are trusting God for their safety The family live in a rented house in Gujranwala and Rimsha herself has been working in the glass crushing factory from last year. Four family members, Mumtaz Bibi, Rimsha, Arslan and the wife of Adnan were earning 8000 Rupees (£52) per week each, working at the glass factory. They worked hard for a pittance but now without employment they are asking for help and support to cover their daily costs while they seek a new home and employment.  They are also seeking assistance for a solicitor.  The cost of a solicitor would be around £1500,