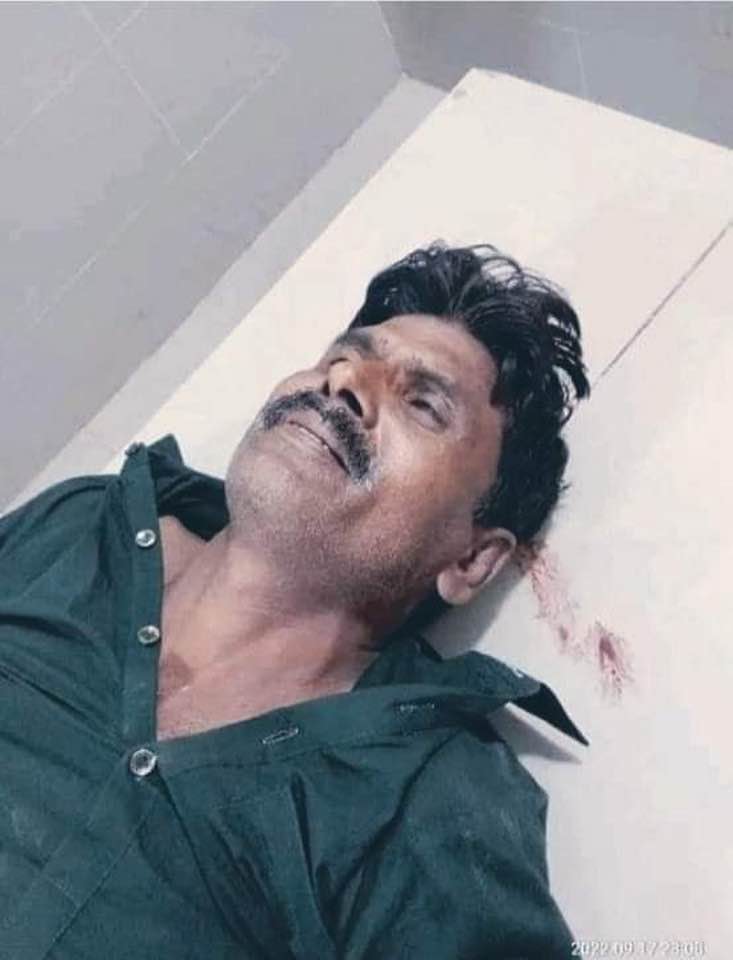 London: (By Hannah Chowdhry) A young Christian man from  Zafar Wali in Sambrial died while in the custody of police during a brutal interrogation involving violent torture.

Bashir Masih now becomes the 7th Christian man killed in a Police station during a rough interrogation since 2009.

Bashir Masih worked as a rickshaw driver and worked endless hours to feed his family of five children and wife Rozeena Bibi.  Mrs Bibi has stated that a Muslim man named Choudhary Imtiaz accused Mr Masih of theft of a car without any evidence, which resulted in his arrest.

After arresting Mr Masih, it is alleged police officers tortured him all day long and prevented family members visiting him.  Family members have said they pleaded with Police officers for an opportunity to meet Mr Masih but their numerous requests were denied.

In the late evening of his arrest Mr Masih’s body was taken to a local hospital for a postmortem. Despite knowledge of his family, the two investigating officers listed his corpse as without-next-of-kin.  A very bizarre act considering the many visits made Model Police Station by family members that urged officers to allow them to see Mr Masih, they had also been at home at the time of his arrest.  This has added suspicion into the circumstances of  the death of Mr Masih and in itself is either a corrupted practice, willful negligence or severe negligence.

The local police on the basis that Mr Masih had no next-of-kin even began to prepare a same day burial of the body via state funds. However while the corpse of Mr Masih was in hospital, a man who recognised him informed Mr Masih’s family of his demise.

In a TV interview Rozeena Bibi accused police of using their resources to alter postmortem reports.

At 2:00 am, on 18th September, Rozeena Bibi also filed a First Information Report (FIR) No. 3141/22 charging two police officers under sections 34 and 302 of the Pakistan Penal code.  These charges relate to joint enterprise and murder.

ASI Ghulam Murtaza and PC Azmat Ali have been arrested.  Superintendent  Zia Ullah has been commissioned to undertake the investigation.

Pakistan ratified the UN Convention against Torture and Other Cruel, Inhuman or Degrading Treatment or Punishment in 2010, but despite this legal framework, Pakistan is bereft of any penalties for torture.

Pakistan’s Constitution prohibits the use of torture “for extracting evidence,” but to date no domestic law makes torture a criminal offense.

Legislation has been drafted and needs to be ratified through parliament, however many key legal experts believe that the draft law is full of loopholes that do not fit well with the convention.

The Torture and Custodial Death (Prevention and Punishment) Act 2019, was unanimously approved by Pakistan’s Senate on 12th July 2012, yet just over a year later another Pak-police authority has killed an innocent Christian.

The Senate bill adopted contains a  comprehensive definition of torture in line with Article 1 of the UN Convention for torture.  It also includes for both physical and psychological torture.

Perpetrators would be punishable by three to ten years in prison.

The Bill also makes it a criminal offense to cause a person’s death “directly or indirectly … by and substantially attributable to acts committed upon the deceased while in custody or after his release from custody.”

It includes death in police, private, or medical premises, in a public place, in a police or other vehicle, or in jail. It also includes death while a person is being arrested or taken into detention or being questioned. The proposed law also criminalizes acts of sexual violence committed in custody, including “rape or sexual abuse” or “any kind of sexual violence on a person … irrespective of the sex and gender of the perpetrator or the victim.”

But even with tighter legislation on the horizon, Pak-police authorities do not seem to have altered their working processes.

“Bashir Masih will now not have his day in court to fight for justice, he will not have the opportunity to prove whether he is guilty or innocent.

“The duty of care that should have been applied to Mr Masih has been found to be forfeit,

“It is the continual negligence of the courts to tackle police brutality in Pakistan, that ensures these tragedies continue.

“Even the onset of new anti-torture laws will make little dent on centuries of impunity.”

Bashir Masih’s death whilst in custody is the 10th incident of a Christian being killed in a prison cell by alleged police brutality, since our inception.

Robert Danish aka Fanish Masih was the first reported incident – killed September 15th 2009 with marks of a garotte around his neck and numerous other injuries (click here).

3.On 11th March 2015  Aysha Bibi was arrested without evidence for theft of gold from a house where she worked as a domestic cleaner. She was tortured during a police interrogation during which her son was later also arrested and beaten before her.  When he went unconcious she was set free from jail and later police unceremoniously dumped her dead sons body on the streets before her home. We reported on the murder of Zubair Rashid

5. On 15th January 2016 Liaquat Masih was found dead with marks of a garotte around his neck and with numerous cuts and bruises .

6.  Indaryas Ghulam was found dead with numerous bruises and cuts over his body an autopsy stated ‘died of poor health’. He was one of the 500 people arrested in the wake of the Lahore Twin Church attacked after two Muslim men were killed in a riot by Christians. He is believed to be innocent and was never convicted.  He died on 13th August 2017 (click here), one day before the 70th anniversary of Pakistan Independence Day.

7.  Usman Masih was registered as dead through heart-attack but was covered in bruises and welts all over his body on 9th December 2017 .

8. Ishaq Maseeh was found in a pool of blood with his throat slit in very suspicious circumstances in communal inmate toilets on Wednesday 6th December 2018 .

9. A 28-year-old father of two was brutally tortured for 4 days, which included being urinated on in the face. he was killed on 28th August 2019 .