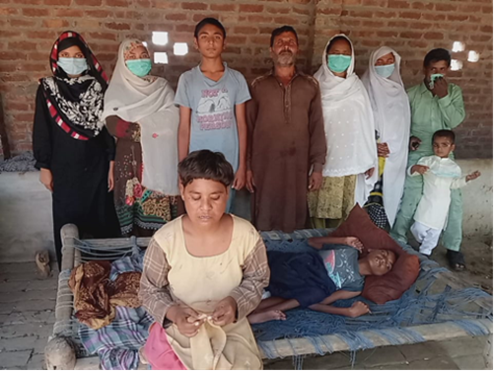 London: Christian man Rehmat Masih of Sallar village, Gujranwala, is being consistently threatened with death if he doesn’t convert to Islam.

Masih has eight children, six daughters and two sons. The two older daughters are married while the rest of the children are living with him. Two of his daughters are mentally ill, and one was recently raped but he couldn’t get her justice.

He is very upset about this but currently he is facing a new problem himself.

Masih is related to matchmakers, and one day he was traveling for another village when suddenly some Muslim boys Sufyan and his friends from the same village but from influential families, stopped him on his way and started mistreating him.

One of them told him “We know you are related to matrimonial match making business, introduce us to some girls”. Masih told them to please stop, but one of them told him “You have to do this for us otherwise we will make yours and your family’s lives hell.

According to Masih on another day they again stopped and asked him “what kind of person are you, you have done nothing in respect what we told you”.   Masih told them he doesn’t do these kinds of things and asked them to please stop threatening him.

After arguing, one of the boys shouted at him “if you cannot do this, then accept Islam, another said that not just him but his whole family had to convert to Islam if they wanted to live in the village, and if they didn’t, their daughters would not be safe anymore. They all started shouting and beating Masih, and when they finished, they told him to inform them about his decision before it is too late.

Masih said: “It was shocking for me, I came home and shared the whole details with my family, and everyone got upset.

“My wife decided to complain to the families of those boys but instead of listening to her they shouted at her, calling her an “Esaai” (pejorative word for Christians) and saying, ‘we don’t want to talk to you just go away’.”

Some days after this incident, when Haroon Masih, one of Masih’s sons was returning home from work, the same boys stopped him and asked what the family had done about converting to Islam and started threatening him.

Haroon told his family about this incident, which was very upsetting for them but they don’t know what can be done to stop this matter here.

They didn’t want to go to police as they knew if they did the situation would worsen instead of getting better.

Two weeks later, one-night Rehmat Masih received a call from unknown number and asking about his matrimonial services and wanting to meet him in person. Masih receives such calls from potential customers, so he went out to meet them personally.

When he still hadn’t returned home the next morning, the family decided report him missing at the Saddar Police station.

When they were returning back, suddenly Haroon Masih saw his father sitting on the ground at CNG/petrol station of Ch. Shamshad and some boys were beating him and shouting at him, and it looked like he had been there all night.

According to the family Haroon went to rescue his father and told those boys to stop.  They said they were beating him because he was caught trying to rob the petrol station and continued to beat him until someone intervened.

Instead of going home they went to the police and told them whole story, showed them all the injures on his face and body but the police denied taking any action against them because they are rich and influential.

Haroon said: “We are feeling very helpless and don’t know what to do and where to go for help”.

Rehmat Masih, crying said “I don’t know what wrong I have done, it is not a sin to be a Christian, why are they asking me to convert to Islam.  I am Pakistani too and i have a right to live in the country peacefully and practice my religion with freedom. I appeal to the Chief Minster and all other high authorities to have mercy on me, save me and my family and take action against all these perpetrators before it is too late. My family is living in a fear, I am a poor man and have a large family with two disabled daughters, and cannot move anywhere else, please help me.”

Nasir Saeed Director of CLAAS-UK said: “This is horrible, living in the west we cannot think of his situation but these such cases happen every day in Pakistan but are hardly reported as people living in the villages don’t know where to go for help, therefore many such cases go unreported and even sometimes people surrender themselves.

“For the last several decades religious intolerance continues to rise and politicians and the government are aware but they have failed to control the situation and have no policies to reverse it and instead promote religious harmony in the country.”

Mr Saeed further said the government continues to introduce such policies, especially changes in schools and college syllabuses, which promote and teach hatred against non-Muslims, especially against Christians and Hindus.

“This is one of the reasons that cases of kidnapping and forced conversion of young Christian and Hindu girls continue to rise and it seems that it makes no difference to the government and they not willing to stop it.

“Many politicians are of the view that no such thing is happening in the country, but it is a false propaganda of the NGOs to belittle the country, while the situation of religious minorities in the country is deteriorating rapidly. Many of the Christian organisations report such incidents everyday but the national media never publish them.

“The situation of minorities is quite dismal, and the international community must pay attention and hold the Pakistani government responsible.”