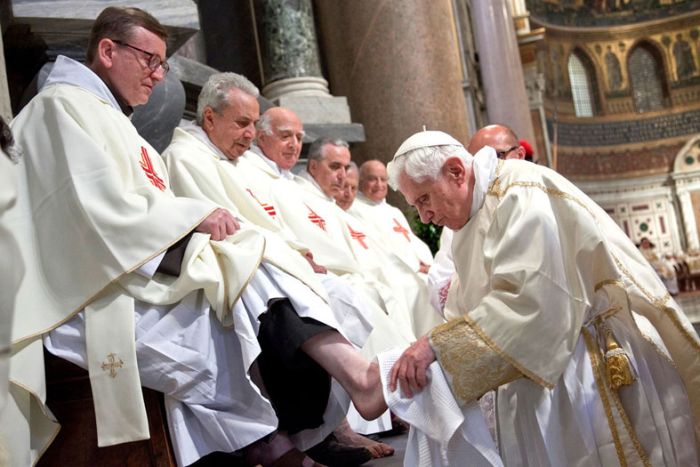 VATICAN CITY: February 11, 2013. (RNS) In a move that took the world by surprise, Pope Benedict XVI announced on Monday (Feb. 11) that he will become the first pope in 600 years to resign, with plans to step down on Feb. 28.

“After having repeatedly examined my conscience before God, I have come to the certainty that my strengths, due to an advanced age, are no longer suited to an adequate exercise of the Petrine ministry,” Benedict told cardinals as they gathered in Rome for the proclamation of new saints. Vatican spokesman Rev. Federico Lombardi said preparations for the conclave that will elect Benedict’s successor are in the early stages. A papal election could be expected “within 10 to 15 days,” he said. “We should have a new pope by Easter.” Benedict said that he was aware that his role, “due to its essential spiritual nature, must be carried out not only with words and deeds, but no less with prayer and suffering.” However, the pope stressed that in today’s world, “subject to so many rapid changes and shaken by questions of deep relevance for the life of faith,” “both strength of mind and body are necessary.” In the last few months, Benedict admitted that his strength had “deteriorated” to the extent he came to the realization of his “incapacity to adequately fulfill the ministry entrusted to me.” New York Cardinal Timothy Dolan, president of the U.S. Conference of Catholic Bishops, praised Benedict for his concern for the poor, his efforts to reconcile with traditionalist Catholics and his warnings of “a dictatorship of relativism.” “The Holy Father brought the tender heart of a pastor, the incisive mind of a scholar and the confidence of a soul united with His God in all he did,” said Dolan, who will have a vote in the upcoming conclave. “His resignation is but another sign of his great care for the Church.” In London, Archbishop of Canterbury Justin Welby, just days into his new post, said he greeted Benedict’s resignation “with a heavy heart but complete understanding.” “As I prepare to take up office I speak not only for myself, and my predecessors as Archbishop, but for Anglicans around the world, in giving thanks to God for a priestly life utterly dedicated, in word and deed, in prayer and in costly service, to following Christ,” said Welby, who will be formally installed on as head of the Church of England and the worldwide Anglican Communion on March 21. While it is uncommon for popes to resign, it is not unheard of. Benedict himself, in his book-length 2010 interview with journalist Peter Seewald “Light in the world,” had said that he would resign if he felt incapable — psychologically or physically — of carrying on with his duties. The Rev. Thomas Reese, a Jesuit priest in Washington, said that as many as 10 popes may have resigned in the past but historical evidence is limited. The most recent papal resignation was in 1417, when Gregory XII resigned to bring about the end of the Western Schism, he said. Lombardi said many people were “taken by surprise” by the announcement. The Dean of the College of Cardinals, Cardinal Angelo Sodano, responded to the pope’s announcement in a short address. “We feel lost, we are almost in disbelief,” he said, according to Lombardi. Lombardi stressed that a papal resignation announcement doesn’t have to be accepted by anyone. According to Lombardi, after the pope’s resignation on Feb. 28, Benedict will move to the papal villa of Castel Gandolfo, outside of Rome. After that, he will settle in a former cloistered convent inside the Vatican, where renovation works are ongoing.