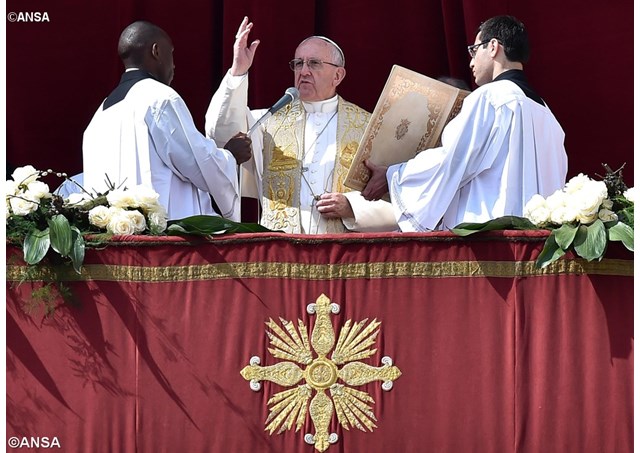 followed by the traditional Benedictio urbi et orbi – the “Blessing of the City and the World”. Delivered from the central loggia – the balcony set in the middle of the upper level of the façade of St. Pater’s Basilica – the Holy Father’s remarks on the occasion focused on Christ’s perfect triumph over evil and sin in the Resurrection. The Holy Father recalled all victims of terrorism everywhere, saying, “May He draw us closer on this Easter feast to the victims of terrorism, that blind and brutal form of violence which continues to shed blood in different parts of the world, as in the recent attacks in Belgium, Turkey, Nigeria, Chad, Cameroon, and Côte d’Ivoire.” Pope Francis went on to say that the Easter message speaks especially to those seeking to escape from persecution and poverty, calling everyone in happier situations not to forget them. “The Easter message of the risen Christ, a message of life for all humanity,” said Pope Francis, “echoes down the ages and invites us not to forget those men and women seeking a better future, an ever more numerous throng of migrants and refugees – including many children – fleeing from war, hunger, poverty and social injustice.” The Holy Father also spoke directly to all people everywhere, who struggle to keep faith and hope. “To those in our society who have lost all hope and joy in life, to the elderly who struggle alone and feel their strength waning,” he said, “to young people who seem to have no future, to all I once more address the words of the Risen One: ‘See, I am making all things new… To the thirsty I will give water as a gift from the spring of the water of life’ (Rev 21:5-6).” Pope Francis concluded, saying, “May this comforting message of Jesus help each of us to set out anew with greater courage to blaze trails of reconciliation with God and with all our brothers and sisters,” and, departing from his prepared text, added, “[of this] we have great need!”