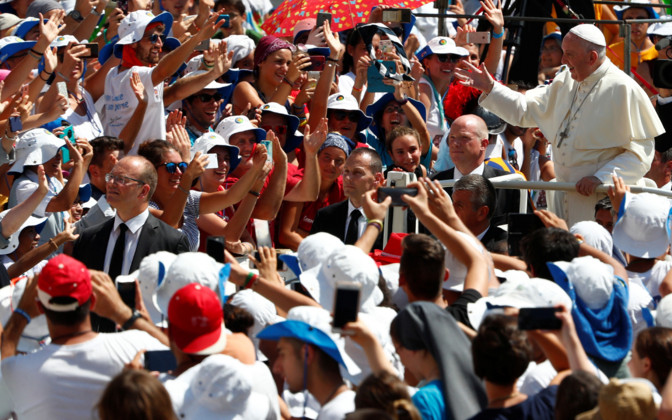 Vatican City: August 13, 2018. (ERR) Those hoping to catch a glimpse of Pope Francis during his one-day visit to Estonia late next month will for security reasons have to preregister online for access to locations he will be visiting.

A delegation from the Holy See to visit Estonia was satisfied with the ongoing preparations for the papal visit, reported ETV news broadcast "Aktuaalne kaamera." Prior to his arrival in Tallinn, the Pope will spend two days in Lithuania, the Baltic country with the largest Catholic population, and one day in Riga. "There is less than two months left until the visit, and now you can feel the pressure mounting --- in a good way," said Apostolic Administrator of Estonia Bishop Philippe Jourdan. On 25 September, the Pope will celebrate Mass in Tallinn's Freedom Square, which can fit approximately 10,000 people. "If it becomes apparent that this won't be enough, then I think that this is a problem that we are capable of solving," Jourdan said. Space in the public square may grow tight as in addition to locals, Catholics and spectators alike are expected to arrive from Finland, Russia, Poland and elsewhere for the occasion. Preregistration online at paavsteestis.ee will be required to attend, the deadline for which is 15 September. Passes to Mass will then be distributed via email ahead of the event. "The ticket is free, of course, but you must register, as this is a state security requirement," Catholic Church in Estonia spokesperson Marge-Marie Paas said. "All children must be registered as well --- with their name, personal identification code, and parents' info. Everyone has to be registered." This requirement also extends to those interested in attending the Pope's scheduled meeting with the youth at St. Charles' Church, where space is limited and available spots are filling up quickly. On the day of his visit, it may be possible to spot the Pope in Tallinn's medieval Old Town or near Freedom Square. It cannot be ruled out either that the Pope's vehicle will make stops en route to allow him to greet spectators lining the street. "The Pope does indeed make such spontaneous stops, as can be seen during other visits," Paas added. Previous papal visit in 1993 September will mark the 25th anniversary of Pope John Paul II's 1993 visit to Tallinn, when on 10 September he became the only pope to visit Estonia thus far. During his ten-hour visit, he celebrated Mass twice in Tallinn --- first at Sts. Peter and Paul Cathedral, then in Town Hall Square. Pope John Paul II also attended an ecumenical prayer at St. Nicholas' Church and met with President Lennart Meri and Prime Minister Mart Laar.