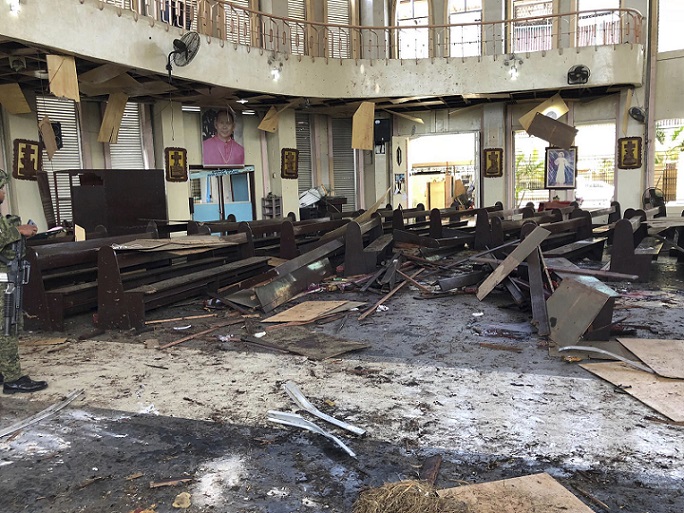 Manila: January 27, 2019. (NPR) Two bombs exploded just minutes apart at a Roman Catholic cathedral in the southern Philippines where Islamist militants are active, killing at least 20 people and wounding more than 100 others during a Sunday Mass, according to police.

The second bomb reportedly went off as first responders arrived at the Cathedral of Our Lady of Mount Carmel, located in Jolo, the capital of the predominantly Muslim Sulu province. Police and military reports said the casualties included both troops and civilians.

The Armed Forces of the Philippines have secured the area of the blast and have transported injured victims to the nearest medical facilities, Defense Secretary Delfin Lorenzana said in a statement.

"I have directed our troops to heighten their alert level, secure all places of worships and public places at once, and initiate pro-active security measures to thwart hostile plans," Lorenzana said.

Regional officials said all casualties were immediately evacuated out of the area, CNN reports.

Witnesses told the Associated Press that the first bomb inside the cathedral sent churchgoers rushing outside. While police and army troops tried to enter the building, the second blast went off, causing more deaths and injuries.

"We will pursue to the ends of the earth the ruthless perpetrators behind this dastardly crime until every killer is brought to justice and put behind bars. The law will give them no mercy," the office of President Rodrigo Duterte said, the AP reports.

Jolo has long been a base for Islamist militants, most notably those of the small Abu Sayyaf group, who are known as one of the most violent Islamic separatist groups in the Philippines. Abu Sayyaf militants, who are blacklisted by the Philippines and the United States as a terrorist organization, have carried out several major bombings since the group began in 1991.