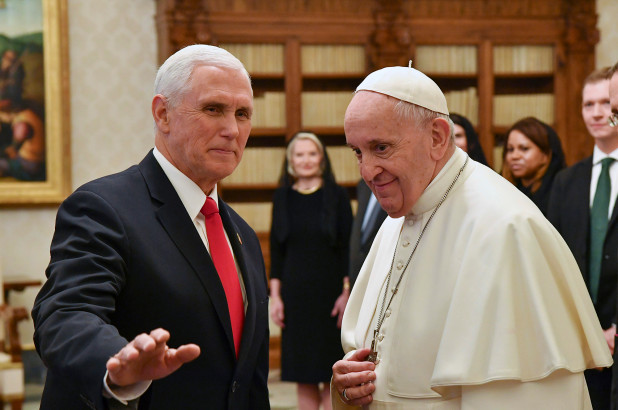 The two met privately in the papal library, along with U.S. Ambassador to the Vatican Newt Gingrich, Vatican officials said.

The two met privately in the papal library, along with U.S. Ambassador to the Vatican Newt Gingrich, Vatican officials said.

Pence presented Pope Francis with a wooden cross taken from a tree at Pence's Washington, D.C., home. In return, the pontiff gave Pence a small medal as a gift for his mother.

Pence joked at the end of the hour-long meeting that the Vatican visit made him a "hero" with his mother, who he said is a devout Catholic.

Pence was scheduled to meet with Italian President Sergio Mattarella and Premier Giuseppe Conte for bilateral talks after his papal visit.

Pence left for Rome after attending the World Holocaust Forum in Jerusalem on Thursday, during which he denounced anti-Semitism and blasted Iran's policies toward Israel.

The world, he said, must "stand strong" against Iran, which he described as "the leading state purveyor of anti-Semitism" that also "denies the Holocaust as a matter of state policy."