The Genocide of the Ottoman Greeks: The First Academic Publication on the Greek Genocide. By Boutros Hussein and Lee Jay Walker 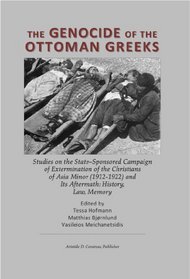 The Genocide of the Ottoman Greeks (www.caratzas.com) is a book which digs deep into the deplorable actions of the dying embers of the Ottoman Empire and the foundation of the Turkish Republic which systematically annihilated various Christian communities. These various Christian communities were the indigenous people and suffered such brutality because of their ethnicity and religious affiliation. However, in the vast majority of schools throughout Europe and further abroad, this ¡°hidden genocide¡± remains ¡°in the dark¡± because of enormous pressure from modern Turkey and other factors.
Like the title of the book implies, the area covered is the genocide of the Greek community. Indeed, this is the first academic publication on the Greek genocide therefore it will serve to be a valuable source of information. The brutality that occurred during this period of history is unimaginable and clearly it is essential that a major academic publication deals with this very important subject. Therefore, The Genocide of the Ottoman Greeks fills this academic gap and sheds light on a genocide which needs more international attention.
On the Greek Genocide website it is stated that ¡°During the years 1914-1923, whilst the attention of the international community focused on the turmoil and aftermath of the First World War, the indigenous Greek minority of the Ottoman Empire, the Republic of Turkey¡¯s predecessor, was subjected to a centrally-organized, premeditated and systematic policy of annihilation. This genocide, orchestrated to ensure an irreversible end to the collective existence of Turkey¡¯s Greek population, was perpetrated by two consecutive governments; the Committee for Union and Progress, better known as the Young Turks, and the nationalist Kemalists led by Mustafa Kemal ¡°Atat¨¹rk¡±. A lethal combination of internal deportations involving death marches and massacres conducted throughout Ottoman Turkey resulted in the death of one million Ottoman Greeks.¡±
William Ramsay, a British ethnographer, visited the Ottoman Empire and clearly he understood what Turkish Muslim rule meant. He commented that the ¡°Turkish rule¡­meant unutterable contempt¡­The Armenians (and Greeks) were dogs and pigs¡­to be spat upon, if their shadow darkened a Turk, to be outraged, to be the mats on which he wiped the mud from his feet. Conceive the inevitable result of centuries of slavery, of subjection to insult and scorn, centuries in which nothing belonged to the Armenian, neither his property, his house, his life, his person, nor his family, was sacred or safe from violence ¨C capricious, unprovoked violence ¨C to resist which by violence meant death.¡±
Henry Morgenthau, the ambassador of the United States (1913-1916) to the Ottoman Empire, stated that the policies of the Turkish government led to ¡°outrageous terrorizing, cruel torturing, driving of women into harems, debauchery of innocent girls, the sale of many of them at 80 cents each, the murdering of hundreds of thousands and the deportation to and starvation in the desert of other hundreds of thousands, [and] the destruction of hundreds of villages and many cities¡±, all part of ¡°the willful execution¡±
Comments and areas covered by the book titled The Genocide of the Ottoman Greeks
¡°The period of transition from the collapse of the Ottoman Empire to the foundation of the Turkish Republic was characterized by a number of processes largely guided by a narrow elite that aimed at constructing a modern, national state. One of these processes was the deliberate and planned elimination, indeed extermination, of the Christian (and certain other) minorities. According to demographic studies, the numbers are stark: In 1912 the areas of Asia Minor and Thrace were inhabited by about 4-5 million Christians and 7-8 million Muslims; by 1923 only 250-300,000 Christians remained.¡±
¡°Raphael Lemkin, the legal scholar who introduced the term genocide into international law, formulated his early ideas on the definition of this war crime by studying the destruction of the Christians of Asia Minor, while the distinguished Turcologist Neoklis Sarris has noted that the annihilation of the Christian minorities represented an integral element in the formation of the Turkish Republic. As the editors of this volume note the 2007 resolution by the International Association of Genocide Scholars, recognizing the Greek and Assyrian Genocides suggests a wider range of victim groups. This volume therefore represents an effort to provide an outline and a direction of a more extensive study of the deliberate destruction and elimination of a Greek presence that spanned over three millennia, in the space that became the Turkish Republic.¡±¡¡ [http://www.greek-genocide.org/iags_resolution.html]
¡°The last two decades have seen a massive amount of research of the genocide of the Armenian population in the Ottoman/Turkish space. Much less scholarly work has been done on the genocide of the Greeks of Asia Minor and Thrace; there are many reasons for this, including the fact that Turkish governments have been successful in intimidating diplomats in the context of Turkish-Greek relations of the last generation, and of subverting academic integrity (inducing some scholars to make a career as denialists supported by international NGOs, all in the name of countering nationalism).¡±
¡°The volume includes article contributions on the areas subtitled: Historical Overview, Documentation, Interpretation; Representations and Law; Genocide Education; Memorialization; Conceptualization; and a very extensive Bibliography¡±
Conclusion
This book is essential reading for all people who are concerned about the genocide of Christians by Turkish rulers. The denial of the genocide encouraged Adolf Hitler because he stated ¡°Who, after all, speaks today of the annihilation of the Armenians? Therefore, the book called The Genocide of the Ottoman Greeks is a must read in order to fully understand the brutal reality of what happened to the Ottoman Greeks and other minorities.
ORDERS:
Caratzas web site:
http://www.caratzas.com/index.cfm?fuseaction=product.display&product_ID=531
Amazon: http://www.amazon.com/Genocide-Ottoman-Greeks-Extermination-Christians/dp/0892416157/ref=sr_1_1?ie=UTF8&qid=1323875017&sr=8-1Caratzas/Melissa Bookswww.caratzas.com
caratzasmelissabooks@gmail.com
leejay@moderntokyotimes.com
http://moderntokyotimes.com