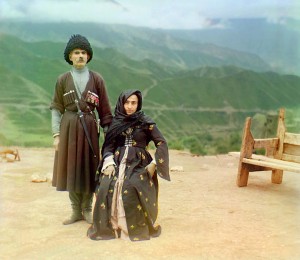 Prior to outside nations spreading hatred, sectarianism, terrorism and sedition these forces had been contained throughout the Russian Federation and Syria respectively. Therefore, various different faith communities resided together alongside different ethnic groups. However, now the forces of sectarianism and religious bigotry are spreading their dangerous ideology to the people of the Russian Federation and Syria respectively.
Said Efendi Chirkeisky tried to reach out to the followers of Salafi Islam in Dagestan in order to bridge the gap between normal followers of this faith and the militants which only see Islamic jihad and supremacy. His death is a sad reminder that the forces of evil remain potent in parts of the Russian Federation. Therefore, many dangers lie ahead if this menace is not challenged throughout the Caucasus region and Tatarstan.
In Libya the Salafi fanatics are now destroying Sufi shrines and likewise the same is happening in northern Mali. The bloodshed in Syria is now a conflict which is pitting pluralism against Islamism which seeks to enslave modernity and all forces which support secularism. Northern Mali is witnessing the same Islamist hatred and the same is happening in Libya where traditional Islam is under attack.
The Syrian army is spilling their own blood for all Syrians irrespective of religion in order to preserve the mosaic of this nation and its independence. However, the FSA and various Islamist terrorist organizations desire to destroy the mosaic of Syria and to govern this nation under a strict version of radical Islam. For this reason, it is imperative that Salafism is defeated and the same applies to the foreign policy objectives of America, Saudi Arabia, France, Qatar, Turkey and the United Kingdom which are all backing “the dark forces of history.”
http://www.youtube.com/watch?v=Iy7njQmDYzE Barbaric crimes of the FSA and Islamists in Syria
leejay@moderntokyotimes.com
http://moderntokyotimes.com
+18 SYRIE// 20 min realisé par SyrianTruth mont...
By veritesurlasyrie| 1 video