Towards a nuclear-free world. By Bobby Ramakant 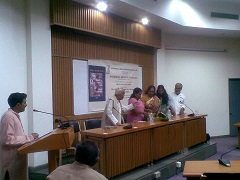 Leave aside safe nuclear waste disposal, we are not even able to take care of domestic waste on our roads, said retired Justice Rajinder Sachchar while speaking at a book launch held in New Delhi on 12th July 2013. A Hindi language book, ‘Towards A Nuclear-free World’, penned by Magsaysay Awardee, scientist and noted social activist Dr Sandeep Pandey and published by Vani Prakashan, was also released by two women activists from Kudankulam anti-nuclear struggle, Ms Immaculate and Ms Maryaselvi at this Delhi meet.
This book launch was followed by a discussion in which distinguished experts took part such as Karamat Ali, peace activist from Pakistan; Praful Bidwai, senior journalist and peace activist with Coalition for Nuclear Disarmament and Peace (CNDP); Swami Agnivesh, senior social and political activist; Prashant Bhushan, senior lawyer and social-political activist with Aam Aadmi Party; Bhasha Singh, noted writer; among others.
One of the most inspiring struggles which have united significant number of population of fisher-communities is against Kudankulam nuclear power plant. Fisher communities in villages of Idinthikarai, near Tirunelveli, have united and stood rock solid against government’s intent to go ahead with the nuclear power generation. Why is the government so reluctant to come out transparent on people’s concerns on safety and nuclear waste disposal? If we look back to humankind’s experiments with nuclear power, both military and civil use of nuclear power have proven to be extremely dangerous. Hiroshima and Nagasaki bombing on 6th and 9th August 1945 respectively and recent nuclear catastrophe in Fukushima, Japan on 11th March 2011, among other examples such as those of Chernobyl Nuclear Power plant disaster, have shown the world how dangerous nuclear power can be. We have not yet gotten over with the ramifications of nuclear disasters and communities and governments still struggle to deal with them. Safe, sustainable and environment friendly nuclear waste disposal continues to remain an enormous challenge confronting governments that are hell bent upon promoting nuclear power.
“Although anti-nuclear struggle is brewing in Kudankulam over the past years, there has been no response from the government so far. No political party has taken a major interest in this people-led struggle. It appears that even the government is also waiting that people might indulge in violence so that it can use this as an opportunity and plea to arrest them. Another important issue is that when the struggle against the nuclear reactor in Tamil Nadu gained momentum, there were long power-cuts across the state, but as the news started trickling in of the reactor to begin functioning the power-cuts have been mysteriously resolved. Such questions also need to be asked from the government. We believe the government is trading away our country’s and people’s welfare” said Ms Immaculate, noted anti-nuclear activist from Kudankulam.
Authorities went to unimaginable extent to intimidate anti-nuclear protesters. Added Ms Immaculate: “Police had entered our church and meted out atrocities. They had beaten us and teargased upon peaceful protestors. They even urinated inside the church and caused damage. Sea is our mother as we take our nourishment and livelihood from it. Everything in our lives is dependent on the sea. We will not let the government take the sea from us. We will not let the government take our livelihood from us. We will fight till our last breath.”
Ms Maryaselvi, another prominent activist from Kudankulam, said that “the local people have no knowledge about safety measures related to the nuclear reactor. Like in a typical village we have to struggle every day for our daily sustenance. Government has not taken any measure to better our livelihood or give us some sort of orientation to escape an untoward incident if it takes place at this nuclear reactor.”
A participant asked about the status of sedition cases filed against 8,000 people protesting against Kudankulam nuclear reactor. Ms Maryselvi and Ms Immaculate responded that the cases have not been taken back, instead a tirade of false cases and accusations have been slapped against local people who are leading the anti-nuclear campaign in Kudankulam.
V Narayanaswamy, Minister of State in the Indian Prime Minister’s office had visited the Kudankulam anti-nuclear struggle. “Narayanaswamy even wept seeing the plight of those on hunger strike but never fulfilled any promise he made to local people when he went back to Delhi” said Ms Immaculate. Instead just earlier this week, Atomic Energy Regulatory Board (AERB) gave the green signal for the commissioning of first reactor. But activists have an unflinching faith in their fight for justice and pledge to continue the campaign “till our last breath.”
“It is our life, people and livelihood that is at stake. We are not going to sell our land or give up our sea. We are going to continue the struggle forward, no matter what” said Ms Maryaselvi.
Karamat Ali, renowned peace activist said that South Asian people must unite to demand our governments to consider a South Asian union [like European Union] and push for pro-people policies for a just social order, including denuclearization in the region. He also requested if Dr Sandeep Pandey’s book can be translated in English so that it can be translated into other local vernacular languages to reach a broader audience and help strengthen a public opinion for clean and sustainable energy.
Using nuclear power for either military or civil use is extremely dangerous and expensive, something our governments simply cannot afford. The top priority for governments should be to invest in clean green energy that is sustainable and has no adverse impact upon our environment or people.