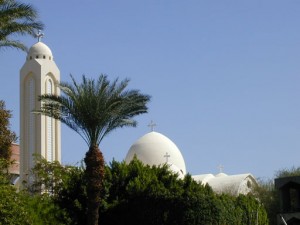 President Obama continues with his anti-Christian and pro-Muslim Brotherhood policies whereby he hopes to salvage the day for the deposed Morsi (Mursi). The same Obama administration gleefully rejoiced in the ending of the Mubarak political era but now America is claiming to be neutral in Egypt. Of course, nobody is fooled by this so-called neutrality because the Obama administration was more than favorable towards Morsi. Indeed, prior to Morsi losing power the American Ambassador of Egypt tried to exert pressure on the Coptic Christian community by asking Coptics not to partake in the anti-Morsi demonstrations.
Obama rightly spoke out about persecution towards the Muslim community in Myanmar but what about the endless persecution of several mainly Christian ethnic groups in this country? Once more, it appears that America deems the Shia, Christians, Alawites, Hindus, and others, to be second class citizens. This “other” also includes the marginalization of mainstream Sunni Muslims who support inclusiveness and the preservation of diversity.
For example, several Sunni Muslim clerics in Syria have been killed by Takfiris and Salafists because they were deemed too moderate. Likewise, several Sunni Muslim figures in Pakistan were killed for speaking up for the oppressed minorities in this country. Despite this, the political elites in London and Washington appear to be obsessed with supporting the Gulf regional agenda of spreading militant Takfiri and Salafi Islam.
The BBC reports that “Local Copts say they have been singled out by radical Islamists, for campaigning against the former president and his Muslim Brotherhood movement.”
“On 6 July, a priest was shot dead by gunmen in an outdoor market in northern Sinai.”
“Five days later, the body of a beheaded Christian man was found in the same area, where Islamist militants have launched a string of attacks on security and military posts since Mr Morsi’s overthrow.”
The militant Sunni Islamist obsession with beheading civilians, captured soldiers, apostates and so forth appears to be a tool of pleasure. After all, in Somalia the al-Shabaab (al-Shabab) is maintaining its Islamist inquisition whereby all apostates to Christianity face death including being beheaded. In Syria various Takfiri and Salafi terrorist organizations alongside the Free Syrian Army (FSA) have been involved in beheading Alawites, Sunni Muslims deemed pro-Syrian government and butchering Shia Muslims. Alongside this, Christians outside of the protection of the Syrian army and Hezbollah (in border areas); are fearful of the Gulf and Western backed terrorist groups. Similar barbaric acts take place in other nations by the same forces of darkness in Afghanistan, Iraq, Pakistan and Southern Thailand (Buddhist clerics have been beheaded and butchered in this part of Thailand).
Therefore, the beheading of a Christian in Egypt is following a similar pattern. Despite this, the Obama administration appears rather timid about the persecution of Christians by the followers of the Muslim Brotherhood (and various different militant groups) which have been supported by America. However, the same Obama administration is seeking the release of Morsi and for the Muslim Brotherhood to be safeguarded.
America under Obama cared zilch about Coptic Christians facing dhimmitude under the Muslim Brotherhood led Morsi government. Indeed, more worrying for the Christian community, secularists, the Shia, and others in Egypt; is that you have even more militant Sunni Islamist militant groups which seek to turn the clock back to “year zero.” It was the fear of a militant Sharia state and democracy being usurped under the Muslim Brotherhood which meant that anti-Morsi supporters felt that time was running out.
While Coptic Christians are being murdered and recently four Shia Muslims were brutally killed, including a Shia cleric; the U.S. State Department is issuing guidelines to protect the Muslim Brotherhood. Jen Psaki, a spokeswoman for the U.S. State Department, stated that “An inclusive and sustainable democracy where all sectors of society, where all Egyptian people are fully represented, will represent all sides. And we feel that includes of course the Muslim Brotherhood and other representatives that have been detained.”
Yet, how inclusive was Morsi and the Muslim Brotherhood? More to the point, can the Muslim Brotherhood – and other Islamist militant parties – be trusted with democracy? Also, why isn’t the Obama administration rebuking the supporters of the Muslim Brotherhood more strongly? After all, militant supporters of this organization have no qualms in killing Christians and people deemed to be anti-Morsi?
Ahram Online reports that Hassan Shahin (media spokesperson for ‘Rebel’) states that “Violence will not scare the Egyptian citizens who took to the streets on 30 June in peaceful [protests]; Egyptians are the only source of legitimacy.”
Shahin further comments that “Your leaders sacrifice you to face-off with Egyptian citizens so that they can cover up the crimes they should be prosecuted for…your leaders are corrupt: leave them and return to the side of the Egyptian people…those who defy Egyptians lose.”
Currently, the Coptic Christian community and the Shia are both fearful of Salafists and militant Muslim Brotherhood supporters spreading more death and destruction. If America believes that the Muslim Brotherhood was inclusive then the Obama administration should talk to the Shia, Christians, secularists and the whole spectrum of Egyptian society irrespective of religious faith or no faith. Obviously, for over 30 million people to march against Morsi and with politicians resigning then something was badly wrong. Therefore, could opposition forces trust the democratic credentials of the Muslim Brotherhood – or would a new darkness infringe itself on all Egyptians after usurping power?
It finally must be stated that pro-Morsi and anti-Morsi supporters have been killed by the ensuing violence in areas of high tension. Yet, Christians in Egypt are being killed far from areas where tensions have erupted. Therefore, the Coptics of Egypt are being deliberately targeted and being killed for being Christian. However, for the Obama administration it appears that they loathe to attack the reasons why.
http://www.bbc.co.uk/news/world-middle-east-23337659
http://english.ahram.org.eg/NewsContent/1/64/76584/Egypt/Politics-/Morsi-supporters,-opponents-react-to-Monday-clashe.aspx
leejay@moderntokyotimes.com
http://moderntokyotimes.com