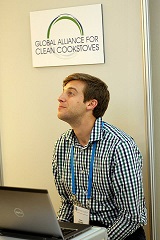 Three billion people around the world still cook their daily meals with wood, charcoal, coal and other forms of solid fuel. According to the latest Global Burden of Disease update released in December 2012, resulting health impacts lead to four million deaths annually which after high blood pressure, alcohol and tobacco is the greatest killer in the world. In India at least over a million people died each year due to health impacts of using solid fuels for cooking (25% of the global burden) which is quite alarming and a significant problem in the country. Yet the Indian government has not worked adequately to address this problem for years," said Sean Bartlett, Senior Communications Officer, Global Alliance for Clean Cookstoves.
Agrees Dr Chen-Yuan Chiang, Director, Department of Lung Health and Non-Communicable Diseases (NCDs), International Union Against Tuberculosis and Lung Disease (The Union): "Globally, about 50% of all households and 90% of rural households, use solid fuels (coal and biomass) as the main domestic source of energy. About 50% of the world population is exposed to the harmful effects of these combustion products. More than 70% of household in China use solid fuels for cooking and/or heating."
Acute Lower Respiratory Infections (ALRI) are the biggest killer of children under five years of age. Pneumonia is also a huge challenge. Chronic Obstructive Pulmonary Disease (COPD) is another challenge caused by indoor air pollution. "We are commissioning research to better understand the link between child survival and clean cookstoves. So we entered into a major partnership with World Lung Foundation which helps support three studies we currently have going on, in Nepal, Kenya and Nigeria, which are looking at children under five but also on pregnant women and new born infants. When a pregnant woman is cooking and exposed to smoke of solid fuel-based cookstoves, the foetus is exposed as well. The outcome of these three studies is likely to come out next year" said Sean Bartlett.
FROM IMPACT TO SOLUTIONS, WOMEN IN THE CENTRE!
Although women are often more adversely affected by smoke from solid fuel or biomass-based cookstoves, yet they are the ones coming forward to usher in a change. "Women are more affected by smoke from Cookstoves using solid fuel because in most homes women are the ones cooking, fuel purchasing or fuel gathering. Women can also play a very unique role and seek employment too. In Cambodia, women are playing a key role in manufacturing of clean Cookstoves. There are also women who are selling Cookstoves either as a part of value chain, stores, or visiting households in villages or visiting a collective of women to do a cooking demonstration. Lastly women are also going to other women's homes and train them on how to use clean Cookstoves. So from impact to solutions women are very much in the centre" said Sean Bartlett to Citizen News Service – CNS at 8th World Conference of Science Journalists (WCSJ 2013) in Finland.
UNIVERSAL ACCESS TO CLEAN COOKSTOVES BY 2030
We need to set basic standards on cleanliness, efficiency, and safety when it comes to cookstoves. "We are working with International Standards Organization (ISO) to set the baseline. Bureau of Indian Standards (BIS) has also recently joined our efforts. Twenty three national bodies that set standards are working with us to set the baseline for clean Cookstoves. We have a goal of 100 million households adopting clean and healthy Cookstoves by 2020. About 500 million households need clean Cookstoves so even if we are able to achieve our goal, only 20% of those in need will be served by 2020. Our vision is that if we are able to meet our goal by 2020 of 100 million households adopting clean Cookstoves then we believe that the world will be set to achieve universal access to clean Cookstoves by 2030 which is in line with UN goal of clean and renewable energy by 2030" said Sean Bartlett.
There are positive changes taking place in China too. "China has undertaken several large-scale programmes to promote improved household stoves in the 1980s. A total of 786 counties in China took part in the first programme, and most households in these counties had improved stoves installed, that is, stoves with a chimney and grate" said Dr Chen-Yuan Chiang of The Union.
The major source of indoor air pollution comes from domestic use of solid fuels. We have no excuse to delay making positive changes to arrest the negative health outcomes due to resulting indoor air pollution. We need to make available alternate, cleaner types of fuel that produce less harmful smoke; improve access to better stoves used for cooking and heating; improve the quality of the ventilation used for the stoves and provide education for behaviour change. (CNS)