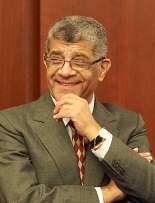 Dr. Ashraf Ramelah is Founder and President of Voice of the Copts and Board Member SION