Hindu, a drug addict, meets Jesus and became His witness; By Cinjraj 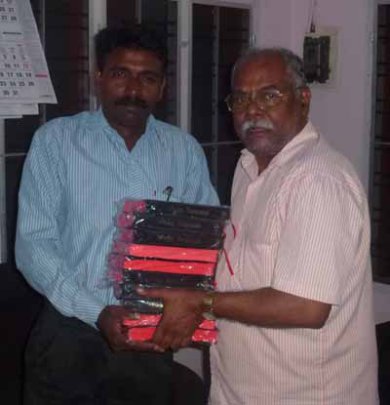 Mohanan Nair was born and brought up in a prominent Hindu family in India. He used to do pooja to the Hindu deities.
During his pooja, he always used to say, “I have so and so problems at home, I do not know who is the real God, Muslims say its Allah, Christians say its Jesus, Hindus say so many gods, but whoever is the real God, please hear my prayer and answer me and help me to come out of all these problems. ”
When he was growing up, his problems were not decreasing; but more increasing. He felt mental agony and it lead him to the mental depression. He hated life. Suicide and anger always seemed to consume his mind. He took it upon himself to medicate. He became as a drug addict.
Drugs were the name of the game and it seemed to help until the tolerance built up and he was looking for the next fix. A life of drugs, alcohol, and girls was covering the problem of depression. Although it masked the feelings of emptiness, deep inside it was still there. Wherever he went or whatever he did depression was following closely.
One day his heart was broken for the last time by a bad relationship. He had made his mind that this life wasn’t for him. He chose to end his life. But before he did, he remembered that, once a Pastor named Bill Liniewicz of the Upper Midwest Ministry (The Most Excellent Way), Calvary Chapel Church alongwith Pastor Paul Ciniraj of Paul Ciniraj Ministries preached about Jesus Christ, who had no sin, but carried the sin of all human beings and crucified and died as a ransom and raised from dead. If we believe in Jesus we can be saved from sin, eniquities and all problems.
Mohanan Nair felt to pray to Jesus. He prostrate before the Lord and cried, “Oh Jesus, if you are the real Lord and God, make me alive peacefully. I believe in you as my saviour. Give me peace”.
While he was on prostration and praying, he fell into deep sleep. When he sleep, he saw Jesus coming down to him with thousands of angels and took him as a mother take her child and kept him at Jesus’ hands like a baby and said, “You are my child. I have marked you upon my palms. Be my witness”
Suddenly he got up from asleep, stood up from the floor from the prostration and crying out to God, “Lord I will”
Soon he was baptised in a Pentecostal Church. Nw he is witnessing our Lord Jesus as an evangelist of Paul Ciniraj Ministries among Tamil people.
Paul Ciniraj Ministries concentrate on evangelizing India and the third world for winning souls unto Jesus Christ through preaching, teaching and doing charitable works.
They donate Bibles in all different Indian language and distribute the Scriptures to the sick, poor, needy and gentiles, also share the Good News with Muslims who form an underground church in India.
There is great hunger for the Word of God in India, which is the second largest in the world, just behind China, with 1.2 billion people. India has 16 major languages and hundreds of medium and small languages, though Hindi is the National language.
The Bible Society of India, publishes the Holy Bible in 65 languages in India and the New Testament in an additional 69 languages. Translations are ongoing in another 75 languages. In all of India there are only 2% Christians. India’s population is more than 1.2 Billion. Out of this 80% Hindus, 14% Muslims, 2% Christians and others are 6%. 98 out of 100 are unreached with the Gospel. It is their aim to donate Bibles, New Testaments and simple Gospels throughout India in many languages as much as they can. By this ministry, many Hindus and Muslims are experiencing the Salvation of Jesus Christ.
Missionaries and evangelists, and many believers are facing much persecutions against evangelizing India. But our Lord’s return is very near. So India need to be evangelized so fast. The harvest is plenty; but the laborers are few; prayer supporters are also even very less. Please have a thirst for India’s evangelization.