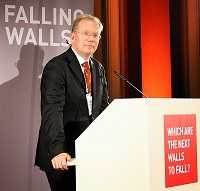 A young scientist was awarded the third prize at Falling Walls 2013 for her research aimed to reduce mortality and complication rate in surgical procedures to treat cardiovascular diseases (CVDs). According to the World Health Organization (WHO), CVDs are the number one cause of death globally (30% of all global deaths are attributed to CVDs). "Of these deaths, an estimated 7.3 million were due to coronary heart disease and 6.2 million were due to stroke" said Dr Rishi Sethi, Associate Professor, Department of Cardiology, King George's Medical University.
Katerina Spranger from University of Oxford is one of the AT Kearney Scholar at the Falling Walls Conference 2013. 100 emerging researchers, innovators and young professionals showcased their research work, innovative ideas and initiatives on societal challenges. Spranger presented her idea of a new technology to help doctors improve surgical procedures that are tailored to the needs of each individual patient and provide the optimal treatment for cardiovascular diseases. Third prize of Falling Walls Labs 2013 was shared by Katerina Spranger of the University of Oxford with John Woodland from South Africa.
Katerina Spranger spoke with Citizen News Service (CNS): "most cardiovascular disorders are treated with stents. There are so many different devices to treat cardiovascular diseases but we also should recognize that every patient is different too. So there is a big need for doctors treating cardiovascular disorders to choose the right device for the patient. I have developed a simulation software that takes patient-specific data into consideration, such as imaging data, blood flow, pressure measurements, among others, to model the devices, its mechanical properties and mechanical behaviour [to meet patient's unique parameters]. Right now doctors treating cardiovascular disorders do not know how the devices are going to behave in patient's body. So our simulation software helps them get this knowledge."
"My research can personalize [cardiovascular] surgery. This software can help doctors plan the surgical procedure in advance, which will minimize complications. There is a big rate of complications related to [cardiovascular] surgeries. For example, if the device is of the wrong size, then they can start migrating in the body. They can be loose if they are of the wrong size and not attaching to the vessel walls. So our simulation software helps doctors plan surgeries in advance and reduce mortality and complication rates" said Katerina Spranger.
Looking ahead, Katerina said to CNS that demonstration studies should test this software in developing countries too and record its impact in reducing CVD-related mortality and complication rate in surgical interventions. She believes that in best case scenario, it may take up to 2 years for her research to help treating cardiovascular surgeons on the ground. Most cardiovascular diseases can be prevented by addressing risk factors such as tobacco use, unhealthy diet and obesity, physical inactivity, high blood pressure, diabetes and raised lipids.
FALLING WALLS 2013
Dr Martin Sonnenschein, Managing Director (central Europe), AT Kearney, said that the Falling Walls Labs show, there are many promising approaches on drug research. "We have high hopes that these ideas can establish themselves on the market and improve the treatment of infections significantly." This year qualifying Falling Labs were held in cities such as Moscow, Johannesburg, London, São Paulo, and Los Angeles. Dr Martin envisions to hold 100 such qualifying labs around the world in near future.
FALLING WALLS VENTURE 2013 AWARDED CYNORA
Sebastian Turner, founder of Falling Walls Foundation said that their initiative is unique as they showcase science-based startup ventures and ideas that show innovation, sustainability and social impact. The start up ventures with breakthrough potential are nominated by academic institutions of repute and investment companies, said Turner.
Tobias Grab from Cynora was awarded at the Falling Walls Venture 2013. "65 million years ago meteorites crashed in our earth, this metal (Iridium) was the only one that was able to produce light when used as OLED (organic light-emitting diode)" said Tobias.
Tobias' team found that a compound based on Copper can also be used instead of Iridium to emit light when used as OLED. Iridium based OLED are very expensive, for example, OLED TV can cost up to Euros 10,000. But using copper instead of Iridium can help reduce cost and bring a dream come true of "printing lights on flexible displays". "What if windows can light up after sunset?" asked Tobias.
To commemorate the historic falling of Berlin walls on 9th November 1989, Falling Walls Foundation continues the tradition of helping walls fall to advance innovative and sustainable social impact. This year was the fifth year of Falling Walls initiative. (CNS)