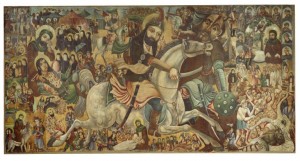 Shia Muslims all over the world should be solely focused on the martyrdom of Imam Hussein during the religious festival of Ashura. However, for Shia communities in nations like Iraq and Pakistan, then it is also a time which is fraught with danger because of Sunni Islamic terrorists. Sadly, this year is following the usual pattern because many Shia Muslims have been killed by barbaric terrorists in Iraq.
The martyrdom of Imam Hussein and his many deeds on this earth continues to inspire and bring people closer to God. With this knowledge, the Shia community refuses to be intimidated and cowed by Sunni Islamic terrorists who hate all and sundry. Therefore, despite the dangers of holding religious processions because of the current climate in Iraq and Pakistan, and in other nations, the Shia rightly show their love of God and commemorate the martyrdom of Imam Hussein irrespective of the dangers they face.
Lee Jay Walker at Modern Tokyo Times comments “Indeed, it is apparent that Salafists, Takfiris and Sunni Islamic terrorist organizations desire to crush Christian and Shia communities throughout the Middle East and parts of North Africa. Not only this, Sunni clerics who support religious diversity and universal brotherhood are also being targeted and crushed by the onslaught of Salafi extremism and other militant forces emanating from the Gulf region. Likewise, Sufi shrines have been destroyed by Sunni Islamists in Libya, Mali, Somalia and Syria. Therefore, the Shia communities in several nations are on the frontline of Sunni Islamist militancy and this reality highlights the power and importance of Imam Hussein during such difficult times.”
In the latest attacks against Shia Muslims it is known that two terrorist attacks killed at least eight people south of Baghdad in the province of Wasit. Likewise, in the province of Diyala at least 15 Shia Muslim pilgrims were killed by religious fanatics.
The BBC reports that “On Wednesday, a string of bomb attacks in Iraq targeting Shia pilgrims and police left at least 20 people dead, officials said…Up to two million Shia are expected to make the pilgrimage to the Iraqi city of Karbala, where there is a shrine to Hussein’s martyrdom…Sectarian violence in Iraq has reached its highest level since 2008.”
Therefore, with vast numbers of Shia pilgrims visiting Karbala it is reported that around 35,000 soldiers and other security forces are being deployed. One can imagine the outcry throughout the Muslim and Western world if non-Muslims were slaughtering the Shia and attacking such a holy place. However, it appears that the victimization of the Shia is being underplayed because of the power of wealthy Sunni Muslim dominated Gulf states which fund countless projects in the West.
This reality means that the Shia when visiting Karbala can hear helicopters overhead which are looking out for terrorist attacks. Similarly, major security perimeters are in place and vehicles are prevented from the main areas of Karbala because of security factors. Therefore, this sad reality is a fact that blights the environment of Karbala because of Sunni Islamic militants. However, nothing can crush the spirit of the Shia because just like Imam Hussein they refuse to be intimidated by evil forces which hate humanity.
Lee Jay Walker gave guidance and support to both writers
http://www.bbc.co.uk/news/world-middle-east-24936961
leejay@moderntokyotimes.com
http://moderntokyotimes.com