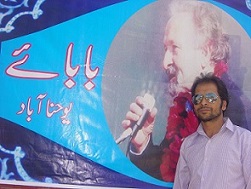 As Christians of Youhanabad are celebrating Golden Jubilee of this most populous Christian town in Pakistan, the social media is condemning one Muslim vegetable vendor in this locality on abusing Christian women patrons of his shop.
Fr. Hennery, a Catholic missionary laid foundation of this town named Youhanabad in 1963, in a piece of land situated on Ferozpur Road, Lahore, with building first home.
In 2013, there are 70,000 Christian families residing in Youhanabad having 90,000 registered votes with 60 schools and more than 100 churches of different Christian denominations.
The Catholic Church in Youhanabad celebrates “Jashan-e-Baba Youhanabad” every year from November 10 to 17, to pay homage to its founder Fr. Hennery with his billboard size portraits in the locality.
The locality like Youhanabad, which have voting strength to elect their Member Punjab Assembly and Member National Assembly in general elections have never exercised their democratic power but obeys orders of Muslim leaders.
There have been many attacks on Churches and Pastors in Youhanabad by Muslim culprits but Christians never stood united to bring them to law that justice may be served.
It’s very important to bring on notice the divided decision of Christians of Youhanabad when they failed to close one vegetable shop in this area owned by a Muslim as a token of gesture from him to mourn deaths of over hundred Christian worshipers in Peshawar Church bombing on September 22, 2013.
Mr. Raymond Wallace Durrani, President of Canadian Chapter of Pakistan Christian Congress PCC posted these comments on his Facebook Timeline “Today, it have completed its 50 years and we are celebrating Golden Jubilee of Youhanabad. It is very sad, as Muslim shopkeeper said,” he would not close his shop, go away, I know your protests, who you are to do this, I know your sisters, they are sold in price of half kilo gram potatoes”
Mr. Raymond said “IT IS SHAME FOR ALL CHRISTIANS IN PAKISTAN” and Christians should open their own stores for Christian need in Christian TOWNS It is only way to stand up on your feet”
Read it which is circulating on social media and condemned by hundreds of Christians “The very Famous city of Pakistan, Lahore has an area on 19km Ferozpur Road, it’s the one of the big town of Christians in Asia, name ‘Youhanabad’ had a very critical issue of extremism by a Vegetable Seller Names Billa; who has a big shop of vegetables in Youhanabad; by religion, he is a Muslim, was doing his business in Christian area silently from last many years; but at September 22nd when there was blast at Peshawar Church; all Christians of Pakistan were shocked because of that problem; all were mourning and were protesting with broken hearts because of deaths of hundreds of innocent Christians and at the same time in Youhanabad area naturally every person was sad and were asking to every shopkeeper to close their shops in respect of all person, who were passed away. But as the Vegetable Seller Billa saw those people in protest and was asked to close the shop, in respond he clearly deny to do so even gave many insulting comments to all his Christians brothers and sisters (As some noble persons accepts),” he abused to all and said, he would not close his shop, go away, I know your protests, who you are to do this, I know your sisters, they are sold in price of half kilo gram potatoes. After hearing those words all persons were very angry upon him because he was abusing without any control, the protest makers were wanted to get him to stop this bad behave; and they might close his shop forcedly and but he ran away on the roof of his shop; after all this he was asked to confess his mistake before some famous and religious leaders of Youhanabad; then he can open his shop but the shopkeeper Billa hardened his heart against all his mistake and he just met some persons in Youhanabad called Chaudhries and respectable people, their names are Billa Pan Wala (Present head of Shopkeeper Anjaman), Goga Choudhry (Previous head of Shopkeeper Anjaman) and Dickson David. They all just allowed him to open his shop without any fear and the noticeable thing is these position holders gave all this decision alone even didn’t told any religious leader or announced in Youhanabad Christian people for their mind clearance. As Billa opened his shop a boy from Youhanabad asked him, who allowed to do so and he referred; all Choudhry sahiban, I mentioned above, that boy was so confused and in anger, he talked with him bit hard. On reaction Billa vegetable shopkeeper called police and in few minutes 4 vans of police came there, just to get a one person who is not a terrorist, not criminal but wanted to know all the things about his insult as a Christian. Billa is still opening his shop and almost not a single person from Youhanabad is coming to him but he is still proud upon his behave. These kind little behave of false proud always creates the big false things which is always the cause of disturbance of some specific groups, who are just forcedly run by some extremists. These effected people can be any poor family or families under jargas law; poor people like struggling for their daily expenses by doing a work of hawkers but some BATHA KHORS snatched their all what they have and Also they can today’s Christians who are not living as a nation of Pakistan but many times suffered just because of they are Christians. We appeal Govt to take these little things serious because these are seeming little behind them there is all big net of crime, which needs to be broken.