Militia kills many in Tripoli: Dysfunctional Libya and the shadow of anti-Syria policies. By Omar Abdullah Ismail and Lee Jay Walker 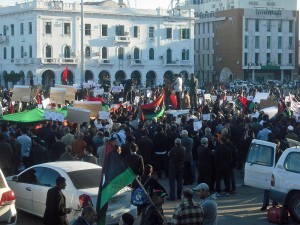 Gulf and Western powers have proved time and again that they can collectively overthrow leaders but after this then enormous vacuums often emerge. Failing overthrowing the targeted government, then the same forces can cause untold mayhem and misery and this is currently happening in Syria. Prior to this Afghanistan and Iraq witnessed outside meddling and the end result is two devastating failed states whereby terrorism, putting women in the shadows, religious persecution, sectarianism, narcotics, and other negative factors, continues to haunt both societies. Therefore, the debacle in Libya is like a re-run despite the issues being different in each failed state.
It is currently known that at least 32 people have been killed after militiamen in Tripoli fired on unarmed people who then returned later to defend themselves by using heavy arms. This in itself says much because various different militias wield tremendous power at the expense of central forces. Therefore, when protesters demanded that the Misrata militia should leave the capital of Libya, it sadly wasn’t too surprising that blood would flow given the situation on the ground.
America, France, Qatar, the United Kingdom, and other nations, had lauded the “new Libya” after the overthrow of the Gaddafi government. However, while the usual players bombed the Gaddafi government from the sky, provided assistance on the ground covertly, funded various terrorist and militia groups, sponsored mercenaries, and provided logistics; the end result in modern Libya is a failed state.
Of course, equally counterproductive for the people of Libya is the reality that Gulf and NATO powers have used the chaos and lack of accountability in this failed state. The purpose behind this is to send military arms and terrorists to Syria from Libya while manipulating the borders of Turkey, parts of Lebanon, border areas with Jordan and exploiting the chaos in Iraq. Therefore, the Libya angle nurtured terrorists from North Africa alongside exploiting the abundance of military weapons available. In other words, covert agencies like the CIA, MI6 and DGSE have all been busy and the same applies to al-Qaeda affiliates and other sectarian Sunni forces in order to destabilize Syria.
Not surprisingly, Iraq is once more facing the reality of daily terrorist attacks and an increased level of reported deaths because of sectarianism and the growing power of various al-Qaeda affiliated groups. Therefore, Gulf and NATO powers have helped to further destabilize Iraq and Libya and this shortsighted policy is causing a nightmare for Syria. Also, other nations like Mali and Tunisia are suffering because of this reality therefore many parts of North Africa and the Middle East are blighted by instability and chaos.
Returning back to the bloodshed in Tripoli whereby around 400 people were wounded and 32 nationals were killed. The Daily Telegraph reports that “Prime Minister Ali Zeidan is struggling to control rival militias, Islamist militants and other former fighters who refuse to surrender their arms two years after helping to oust Gaddafi in a Nato-backed revolt.”
“After Friday’s violence, Zeidan demanded that all militias “without exception” leave Tripoli, but the clashes underscored how little his fledging military can do to curb ex-rebels, who have also shut down Libya’s oil exports for months.”
Zeidan also stated that “The demonstration was peaceful and had been permitted by the Interior Ministry, and then the protesters were fired on when they entered the Gharghur district.” However, this statement merely confirms that the government doesn’t have any real power because clearly various militias wield their own rule of law based on the power of the gun.
France is playing a double game because on the one hand the government of this nation helped to flush out many terrorists in Mali. At the same time, France wants s to protect Algeria from any major ramifications emanating from Libya and is deeply concerned about Tunisia. However, this double game is being betrayed by the involvement of France in negatives forces in Syria and based on France being involved in supporting various militias and terrorist groups in order to overthrow Gaddafi in the first place. This confusing policy means that France wants to protect Francophone areas in parts of North and West Africa but is open to the whims of Saudi Arabia and Qatar when it comes to Syria.
Political elites in France now appear to want to train counter-terrorist forces in Libya in order to safeguard Libya and regional friends like Mali. Yet, unlike in Mali where France can work with the political leaders of this nation, it would appear that in Libya you have no real power processes to work with. In other words, powerful central institutions in Libya are currently redundant because various militias and al-Qaeda groups hold sway in various parts of Libya. Al-Qaeda affiliate groups especially utilize the southern desert in Libya which is lawless and out of control.
Benghazi is also blighted by chaos and clearly the overthrow of Gaddafi isn’t witnessing “a New Libya.” On the contrary, Salafists are spreading their religious ideology and are involved in attacking Sufi shrines. Equally alarming, people can be held on flimsy charges by various players throughout Libya because of limited accountability. Meanwhile, the economic situation is fraught with danger because of corruption, instability, criminality and lack of structure.
The reality of modern Libya is that even the prime minister of this nation isn’t free from the power of the militias. After all, Zeidan was recently held by a militia because of the lack of centralization in this nation. Therefore, the legacy of intervention in Libya is greater internal and external instability for regional nations. Despite this, the same nations are involved in many sinister forces in Syria because international law means zilch and Gulf and NATO powers have a free hand to do what they please.
http://www.telegraph.co.uk/news/worldnews/africaandindianocean/libya/10453894/Bloodshed-in-Libya-as-militia-groups-return-violence-to-the-streets-of-Tripoli.html
http://www.bbc.co.uk/news/world-africa-24959938
leejay@moderntokyotimes.com
http://moderntokyotimes.com