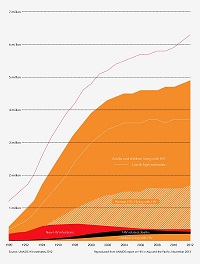 Despite a 26% overall reduction in new HIV infections in Asia and the Pacific since 2001, the epidemic still outpaces regional responses. According to a new UNAIDS report on HIV in Asia and the Pacific, the rate of new infections remains the issue of most concern. According to the report, the fastest-growing epidemics in the region are among men who have sex with men (MSM). HIV levels are particularly high in this key population, with between 15% and 25% MSM living with HIV, largely in major cities.
In 2008, the Commission on AIDS in Asia warned that if MSM were not made a greater focus of HIV prevention efforts, this population would bear nearly half of all new infections by 2020. Just five years on, the overall trends in new HIV infection suggest that prediction is already becoming a reality.
The report is based on mid-term reviews by 21 countries against the ten targets endorsed as part of the 2011 UN Political Declaration. It assesses whether states are on track towards the goal of universal access to HIV prevention, treatment, care and support by 2015, as well as the 2011 ASEAN Declaration of Commitment goal of zero new HIV infections, zero discrimination and zero AIDS-related deaths.
Knowledge of HIV status appears to be lagging behind what may be needed to make those shared goals a reality. Less than one third of MSM and people who inject drugs, and under half of female sex workers, are aware of their HIV status. Delay in diagnosis due to lack of access to HIV testing and counselling can be potentially fatal: Globally, one in four people starting antiretroviral therapy (ART) in low-income countries already have CD4 counts under 100 when they seek health care, putting them at high risk of HIV-related illness and death.
Sexual behaviour may also not be changing fast enough. The report shows that 0.5% to 15% of all men in the region bought sex in the past year, making them the largest population at risk of HIV infection. Surveys also show that less than half of all respondents used a condom during their most recent sexual encounter.
Among MSM in high prevalence countries, between 6% and 20% buy sex from male sex workers, who may be more likely to be infected than their female counterparts in the same cities, with an HIV prevalence as high as 18%. In China, Indonesia, Malaysia, Myanmar, Thailand and Viet Nam, the estimated national HIV prevalence for MSM is over 5%. And it continues to rise in several cities and regions within these countries, as well as in India, Mongolia and the Philippines, underlining the need for a greater attention for HIV prevention.
Despite limited research on specific risk factors and HIV prevalence among transgender people, the little data that is available shows a high HIV prevalence among transgender women in cities: 30.8% in Jakarta, 23.7% in Port Moresby and 18.8% in Maharashtra, India.
The report also demonstrates mixed progress on eliminating new HIV infections among children. Cambodia, Malaysia, Myanmar and Thailand have over 50% coverage of services to prevent mother-to-child transmission of HIV, while Pakistan, Nepal and Sri Lanka lag behind with less than 30%. India has the largest unmet need for effective regimens.
Almost all countries report a lack of robust routine monitoring systems despite having tuberculosis and HIV committees and may find it difficult t to reduce TB deaths in PLHAs by 50% by 2015.
Only ten countries expect to reach the target levels for essential HIV-related funding. The majority of countries reported that persistent negative attitudes towards HIV and sexual minorities mean that HIV is not high on the national funding agenda.
With less than 800 days remaining to reach the targets and commitments of the Millennium Development Goals and the 2011 UN Political Declaration on HIV and AIDS, there is no time to lose says Mr Michel Sidibé, UNAIDS Executive Director. “The strength, experience, resources and political will of Asia and the Pacific must combine to make every single day count, not only for the region, but for the entire global response.”
The new UNAIDS report is released today in Bangkok as the ICAAP conference commences.