Release of Pak Nationals from US Gitmo prison unlikely. By Manzoor Ahmed 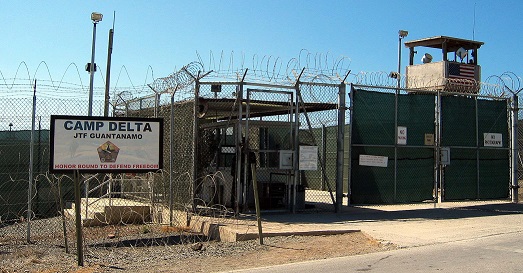 The new United States President Donald Trump is unlikely to release six Pakistani nationals, including the notorious Khalid Mohammed Sheikh, one of the masterminds of 9/11, now jailed at Guantanamo Bay camp.
As many as 72 Pakistani nationals had been caught and detained at this camp in Cuba of which 66 have been released over the years. Of the remaining six, three, including Khalid Sheikh have been categorised by the US as “high value” prisoners serving extended jail terms with little likelihood of their being released ever.
The six Pakistanis have remained jailed even though outgoing President Barack Obama had released hundreds of prisoners over the years. He had pledged in 2008 that he would close the camp, but rising terrorism in which Pakistan’s role has been significant and more important, Pakistan sheltering hundreds of Afghan Taliban, using them as a bait for bargaining and scuttling any settlement in Afghanistan dissuaded Obama from releasing the remaining prisoners of different nationalities and closing down the camp. Fifty-five prisoners remain at ‘Gitmo’ camp as it is popularly called.
Trump is known for his hard line on Muslims in general and the role of the community members in militancy. He had recently tweeted that there should be no further releases from Guantanamo. “These are extremely dangerous people and should not be allowed back onto the battlefield,” he said. He has even vowed to “load up” the facility “with some bad dudes” once he is in the White House.
Khalid Sheikh Mohammed has been charged with war crimes, as has Abd Al Aziz Ali (also known as Ammar Al Baluchi). The third high-value target from Pakistan, Majid Khan, pleaded guilty to war crimes and was consequently convicted in the Military Commissions System amidst speculation that he would receive a reduced sentence in return for testifying against other “high-value” detainees.
Majid Khan was picked up in Karachi on March 5, 2003. According to a leaked 2008 US assessment largely based on confessional evidence, he had been a Tablighi missionary and was recruited to violent jihad by Pakistani relatives who were members of Al Qaeda and who knew Khalid Sheikh Muhammad. The US documents claim that Khalid Sheikh Muhammad persuaded Majid Khan to go back to the US to plan attacks on gas stations and water reservoirs. Majid Khan has given detailed accounts of how he was tortured by the US. He has also apologised for his actions.
That leaves three other Pakistanis still in Guantanamo. Although they have not been designated high-value targets, in 2016 all three were told that their period of detention had been extended.
The oldest of the three is 69-year-old Karachi businessman, Saifullah Paracha. After obtaining a physics degree in Karachi, he attended the New York Institute of Technology where he studied computer systems analysis. Saifullah Paracha — who has said he did meet Bin Laden but denies involvement in violent jihad — has been held for 12 years and three months. In April 2016, the US refused to clear him for release on the grounds that he still poses a threat.
The two remaining Pakistani detainees are the brothers Abdul Rahim Ghulam Rabbani and Mohammed Ahmed Rabbani. The latter’s case has raised issues as to how dangerous some of the remaining detainees are. According to the US, he met Osama bin Laden in 1997 and became a travel facilitator for Al Qaeda working directly for Khalid Sheikh Mohammad.
Rabbani’s lawyers have claimed that he was a taxi driver and, because he knew the Arabic language, would pick and drop many Arab passengers to and from the airport. He has denied that he knew that his passengers included militants. Rabbani has been in detention for over 12 years. His detention was confirmed in August 2016.
Khalid Sheikh Mohammed’s alleged role in organising the 9/11 attacks makes him, by any account, a major player of real significance.
Given disclosures from time to time of militants with Pakistani links and those trained by the ISI in Afghanistan, while not releasing Khalid Mohammed Sheikh and other Pakistani nationals, it is likely that more militants may be captured and sent to Cuba in the coming months by the Trump administration.