We must bequeath good air to our next generation. By Shobha Shukla 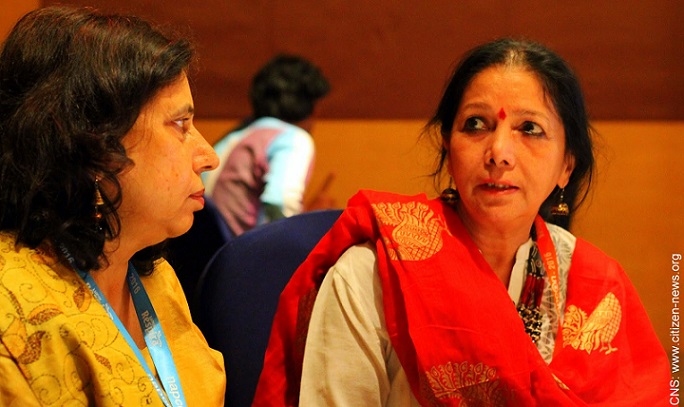 So said award-winning Dr Chitra Chandrashekar, Director of Dr Iravatham’s Clinical Laboratory, Hyderabad. I met her in Mumbai during NAPCON 2016 and was struck by her modesty and her passion for working in the field of TB. Chitra spoke with CNS (Citizen News Service) about her study titled
'Host susceptibility to Mycobacteria and Transmission dynamics', related to the transmission dynamics of TB, which won her the prestigious Professor OA Sarma Oration Award at NAPCON 2016.
Here is what Dr Chitra Chandrashekar shared: “It is important to know why TB transmission continues unabated in high burden countries like India, despite there being tools to control it. My study investigated TB transmission dynamics and associated risk factors in the micro environment of urban slums, which are the hot spots of TB transmission. This first of its kind pilot study done in Hyderabad was conducted over a period of 3 years (2008-2011) and covered a population of 60,000 in 800 households. It took another 5 years to collate the data.”
Mapping TB hot spots: “We took the houses’ addresses of patients coming for treatment from this particular slum from the DOTS centre TB registry of the area. But when we went there we could not locate a single house, due to the very random distribution of houses, even though all addresses were correct. We returned disappointed, but more determined than before. With the help of the local postman, we were finally able to record the coordinates of each individual house and map the entire area. These updated addresses were entered in the TB registry. We could now identify household contacts, the source of contact, those affected in the neighbourhood of each contact, the minimal time duration by which the next contact was infected. All this information based on 10 years data was collated and put in graphical representation in a 3 dimensional map form. This type of mapping when displayed in the DOTS centre, enabled one to know where the next source of infection would be located for anyone coming from that area.”
“By making use of the latest GPS technology and with help from our network of postal department, we can generate these simple maps in DOTS centres to identify sources of infection and thus take effective preventive measures for TB control.”
Risk factors
“The study could also identify the major risk factors. Most of the residents in the study area are daily wage earners. The dwellings are housed in ‘waadas’. A waada is typically a group of rooms arranged around open courtyards. There are 5-6 small 10 feet by 10 feet rooms around a small courtyard and at least 6 people living in each room. Most of the rooms have no windows or any ventilation worth the name. Firewood is the normal fuel used, adding to the risk factor of indoor pollution, especially for women. The main risk factors are poverty, poor ventilation, poor sanitation, and overcrowding. Usually transmission occurs when an infected person coughs, or when the family is in constant touch with the index case. Only the very lucky ones can escape infection in such a scenario”.
“The study also looked into the genetic susceptibility. In the area where the study was conducted there was homogenous population—mostly of Muslim community—who had been living there for more than 5 years. This could help in targeting populations and screening more-at-risk households. It would also help in designing preventive measures”.
Prevention is key:
“The more we can prevent TB, the less transmissions will take place. Addressing overcrowding and improving living conditions in the urban slums is key to controlling TB, because they are the hotspots of TB. Just one window in a room for ventilation to let in sunlight and air will go a long way in controlling transmission of TB infection. Slums should be so structured as to have air and sunlight available for the residents”.
“The study focussed upon identifying TB hotspots—for which mapping is essential. Once this is done, programme managers can work on that. If we can address and control transmission in urban slums, we will be able to protect the general population and 50% problem of TB will be solved”.
“Interestingly, during the study period, the number of women diagnosed with TB increased. Perhaps the PPM DOTS enabled them to access healthcare in nearby centres, rather than travelling long distances to a govt DOTS centre. Also in a PPM programme treatment supervisors had more hold on the patients, by way counselling and ensuring treatment adherence. Another very important finding was that extra pulmonary TB cases are on the rise (whether hot spot area or non-hotspot area). Our aim should be to free the air of TB infection”.
(Shobha Shukla is the Managing Editor at CNS (Citizen News Service) and has extensively written on health issues from several countries globally. Follow her on Twitter @Shobha1Shukla or visit: www.citizen-news.org)