Tobacco endgame is critical 'cog in the wheel' for sustainable development. By Bobby Ramakant 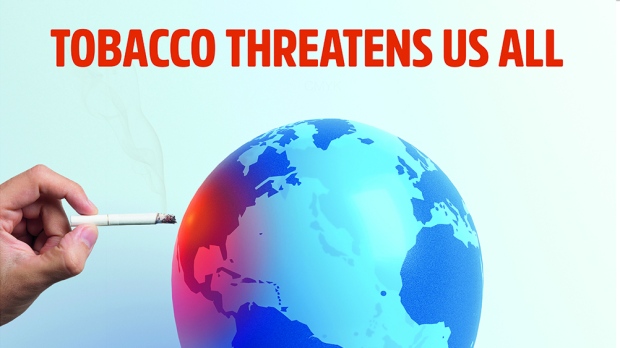 Although governments have promised sustainable development by 2030 by adopting UN Sustainable Development Goals (SDGs), but tobacco triggered pandemics threaten to stall or even reverse the progress made.
Tobacco is a major risk factor of killer non-communicable diseases (NCDs) such as cardio-vascular diseases, cancers, chronic respiratory diseases, among others. In addition to devastating health, tobacco is also linked to poverty, hunger, adverse environment impact, catastrophic economic impact, and stalling human development.
According to the World Health Organization (WHO), the tobacco industry and the deadly impact of its tobacco products cost the world’s economies more than US$ 1 trillion annually in healthcare expenditures and lost productivity.
In India, the direct and indirect costs of tobacco are over INR 1,04,000 crores every year. "It worsens health inequalities and exacerbates poverty, as the poorest people spend less on essentials such as food, education and health care" said Professor (Dr) Rama Kant, WHO Director General's Awardee and former national President of Association of Surgeons of India (ASI).
"Over 7 million (70 lakhs) deaths occur globally every year due to tobacco use. If business as usual continues, then tobacco deaths are projected to shoot up to 8 million (80 lakhs) every year by 2030 - which will fail us on SDGs. India's National Health Policy 2017 promises to reduce premature deaths due to NCDs by 25% by 2025 - a target we will miss if we fail to prevent tobacco diseases and avert tobacco deaths. Each tobacco related disease and death can be averted. Effective tobacco control can save lives and the mountainous economic burden can instead be used for human development" Added Prof Rama Kant, President of Lucknow College of Surgeons and former Director of Tobacco Cessation Clinic at King George's Medical University (KGMU).
"The Sin Tax Reform Law of Philippines is primarily a health measure with revenue implications, but more fundamentally, it is a good governance measure. The Sin Tax Law helps finance the Universal Health Care program of the government, simplified the current excise tax system on alcohol and tobacco products and fixed long standing structural weaknesses, and addresses public health issues relating to alcohol and tobacco consumption" said Michelle Reyes, Technical Advisor, International Union Against TB and Lung Disease (The Union). Raising taxes on tobacco products is an evidence-backed tool to reduce tobacco use, said Reyes. "We appeal to the Indian government to levy highest Goods and Services Tax (GST) on all tobacco products including Beedi" said Professor (Dr) Rama Kant.
Over 180 governments are obligated for implementing the global tobacco treaty (WHO Framework Convention on Tobacco Control), raising taxes is one of its provisions too.
The global tobacco treaty also empowers governments via FCTC Article 5.3 to protect public health policy from tobacco industry interference. In November 2016, governments had agreed to expand the expertise and case studies available to file legal and civil suits against Big Tobacco. The decision, which advances Article 19 of the global tobacco treaty, opens the door for governments to sue the industry and recoup millions of dollars for the health care costs associated with tobacco use. "It could also provide precedents for people to pursue legal liability for other industries that affect public health and the environment, like the fossil fuel industry" said Cloe Franko, Senior International Organizer, Corporate Accountability International. To date, a handful of countries have utilized the principles contained in Article 19. For instance, Canadian smokers recently won a $15 billion payout from the industry, after an historic 17-year legal suit.
Progress made on tobacco control but not enough
"Government has made considerable progress in advancing tobacco control despite industry interference and other challenges. But this progress is too small to match the required scale to prevent every tobacco disease and avert tobacco deaths. For example, we have to ensure that our tobacco cessation services reach out to every tobacco user and help with tobacco quitting. No child or youth or any person of any age should begin tobacco use. Our health system should detect, diagnose, treat and cure each of the tobacco related diseases and avert premature deaths. Are we truly prepared to walk the talk on tobacco control and sustainable development?" asked Rahul Dwivedi, who leads Vote For Health, a citizens' alliance for health and gender justice.
'Business as usual' will fail us on #SDG
"Urgent, intensified and unprecedented efforts are mandatory if we want to turn the tide of tobacco pandemic and make sustainable development a reality for every human with 'no one left behind'. Failure to act will only serve tobacco industry's markets. We have no choice but to ensure endgame of tobacco so that progress on each of the 17 SDGs can be accelerated without hindrance" said Shobha Shukla, Executive Director of CNS and Advisor to Vote For Health.
"Coordination between specific health programmes and inter-sectoral collaboration is fundamental to deliver on the Sustainable Development Goals (SDGs). We cannot end TB unless we also reduce tobacco use. We cannot avert premature deaths caused by NCDs unless we decimate tobacco. Progress on each of the 17 SDGs is entwined and interdependent on each other. All different health and non-health sectors need to unite for tobacco endgame" rightly stressed Shobha Shukla, who has taught in India's prestigious Loreto Convent for several decades.

(Bobby Ramakant is the Director (Policy) at CNS (Citizen News Service) and recipient of the WHO Director General's WNTD Award 2008. Follow him on Twitter @bobbyramakant or visit: www.citizen-news.org)