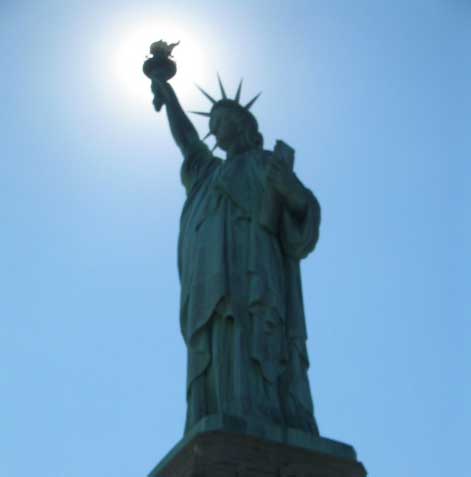 To those who love freedom, equality, justice, and human rights, it is essential to remember who America is.
Many will write to tell about what America is.
They will tell you about the great ideals, the lofty principles, "can do" enthusiasm, and fearlessness in change.
But the ideas of America, the values of America, and character of America are nothing without the American people. Without the American people, the ideas of America are nothing but words and good intentions.
It never has been about "what" America is, but always about "who" America is.
People who try to achieve values, when the world often seems against them.
People who work to have integrity of character in a too frequently corrupt and cynical world.
People who work for their communities, in a world that prizes narcissism and self-absorption.
People who believe in getting things done, when the odds are against them.
People who are willing to risk everything on a fearless commitment to change and freedom.
We hear so much about the symbols of America, its history, the flag, the government institutions.
But those define as much about America as an automobile logo on a hood defines what an automobile is. It takes every part working together to make it run.
It takes every one of the American people to make America work, even when we don't agree, and sometimes, especially when we don't agree.
In times of division, the American character is tested, because our individual character is tested.
We are challenged to prove if we truly have the courage of our convictions, every single day.
When we face times of division and challenge, it is not the first time, and it won't be the last time.
Americans will work together to find a way. That's what they do. That's why they are Americans.
The answers to America's future won't be found among the powerful leaders and the ever-loquacious pundits.
They know only the smallest part of America, like a sea-shell on the shore trying to lecture the sea itself.
The American people, in all of their diversity, their many states, backgrounds, dreams, responsibilites, hopes, tragedies, successes, failures, faiths, conscience, and identities - they are America.
The youngest child that dreams of a bright future, and the loving grandmother who holds the child's hand and sees hope for tomorrow.
The impatient businessman and the patient caregiver.
The hopeful and the disappointed. The joyous and the heartbroken. The sick and the strong.
The hard-working person struggling to make ends meet, and the wealthy who have shown the limitlessness of financial success.
The brick-laying construction workers and the architects that build infrastructures in their mind.
They all are part of the same America, no matter how different they may seem, even to each other.
In small towns and large cities, literally from sea to shining sea, Americans build their communities, their families, and their dreams togther.
They are brought together in a common cause, not simply in a nation-state, but in answering to the age old question of "why,"... "why not."
They are brought together to find within themselves the courage to do what no else believed they could do.
They are America.