Allama Mashraqi and the Unity of Mankind. By Nasim Yousaf 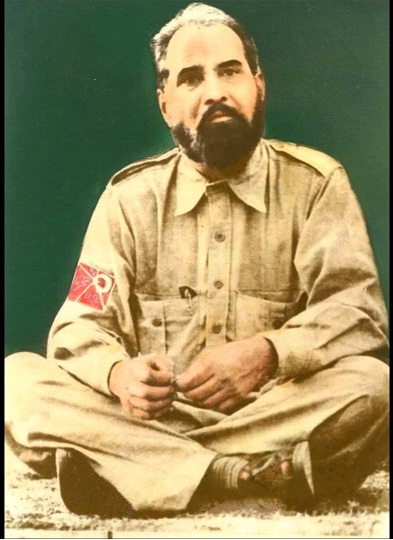 In 1947, the Indian subcontinent was divided into three parts: India, East Pakistan, and West Pakistan. This division resulted in one of the bloodiest massacres the two nations have ever seen. Muslims and non-Muslims slit each other’s throats with anger and hate. The streets of many cities in India were filled with the blood of innocent people. Millions of loved ones were separated from one another. With partition, two communities –Muslims and Hindus - that had lived together for hundreds of years were divided. As a result, a foundation of hatred was laid in the region, a foundation that has consequences even today. Allama Mashraqi, a prominent 20th century leader in the subcontinent, foresaw this state of affairs in a divided British India, and thus rejected the notion of communalism and partition from the very beginning.
Allama Mashraqi had always been a different kind of leader. He was a renowned scholar who came from an eminent family, yet – unlike many of his contemporaries - he shunneda life of luxury in favor of serving the masses. He was a man with wisdom and vision, they remained humble. Mashraqi was a firm believer in brotherhood and the unity of mankind, regardless of religion, class, color, or creed. And it was on these principles that Mashraqi founded his Khaksar Tehreek (Movement) in 1930.Given its benevolent aims, it was not long before the Khaksar Movement gained a firm foothold among the masses, and Mashraqi’s followers and supporters throughout India and abroad grew into the millions.
1 Through the Khaksar Tehreek, Mashraqi preached
Akuwat (brotherhood). 2 He realized that the path to freedom and prosperity for the masses would be paved through unity - as opposed to communalism - and directed his followers to put an end to senseless hate and bigotry. He believed that animosity cultivated through any medium must be crushed with utmost vigour. So, Mashraqi preached the creation of a non-communal social order, and reflected this in two of the fourteen points of the Khaksar Tehreek (issued on October 15, 1937):“We, Khaksars, stand for the establishment of an order that will be equal, non-communal and tolerant, yet non-subservient, by the crushing of all communal sentiment and religious prejudices of mankind by our good and service conduct; an order which will afford proper treatment and protection to all communities and will be founded on eternal justice,goodness and goodwill.”
3 “The Khaksar stands for (a) regard for the religious and social sentiments of all communities, Hindu, Muslim, Sikh, Parsi, Christian, Jew, and Untouchable etc., (b) maintenance of their particular culture and customs and (c) general tolerance; and believes this policy to be the secret of Muslim rule in India for a thousand years.”
4 Indeed, Mashraqi’s dream had always been to crush “all communal sentiment and religious prejudices.” So how then, did India and Pakistan as well as Muslims and Hindus find themselves as bitter rivals? Unfortunately, it seems that not everyone shared Mashraqi’s vision of unity. Thus while Allama Mashraqi – who had been unwavering in his devotion to unity among the Indians – was imprisoned,
5 those with vested political interests continued to spread communalism. ***Mashraqi was held in jail throughout the beginning of the 1940s and the restrictions on his movements were finally lifted on December 28, 1942.
6 Emerging from jail, Mashraqi knew that unity was the need of the hour and immediately went to work. Following his release, he spoke to followers and supporters at Jhansi Railway Station en route to his home in Lahore. In his speech, he desperately pleaded for solidarity between Muslims and non-Muslims and passionately denounced communalism.
The Hindustan Times, Delhi of January 05, 1943 wrote: “Allama Mashriqui…referred to the communal problem…He [Mashriqi] pleaded with the Muslims for religious tolerance, broad mindedness and magnanimity…‘I want Khaksars to preach the gospel of Hindu-Muslim unity which is a living force and without which no liberation is possible. Those leaders who preach ratio communalism are not your leaders. You must discard them and throw them overboard.’”
7 Indeed, Mashraqi not only realized the need for unity, but he also clearly understood that there were those who were actively working to undermine it. Nevertheless, he and the Khaksars continued their efforts towards mobilizing the nation to collectively demand freedom. They worked tirelessly (though historians have neglected these efforts) to enable a meeting between Quaid-e-Azam Muhammad Ali Jinnah and Mahatma Gandhi
8 so the two leaders could resolve their differences. However, despite Mashraqi and the Khaksars’ desperate efforts, the two leaders were unable to reach an agreement, and the nation was ultimately divided into three parts.
History has shown the devastating consequences when leaders allow a nation to fall prey to division, instead of standing united. It is unfortunate, however, that people in Pakistan and India have not learned from the past. Many individuals on both sides of the border -through books, articles, speeches, and seminars - continue to spread communalism in the region. Perhaps most unfortunate is that the manner in which history is taught in Pakistan and India generates hatred between the two major communities of the region: Muslims and Hindus.
In Pakistan, Mashraqi’s philosophy of non-communal politics and his point of view of retaining a single India are practically barred from discussion. Further, his vision to unite all communities - whether they be Muslims, Hindus, Parsees, Christians, or any other - is not promoted. Indeed, it is high time that we begin to learn from the mistakes of the past.

Mashraqi’s ideology is one that could help not only the Indian subcontinent, but mankind in general. In his 1955 pamphlet entitled “Human Problem” (which was addressed to scholars and scientists of the world), Mashraqi wrote:
“Man’s Strange Prejudices
Many causes (e.g. religion, race, colour, nationhood, lust of conquest, capitalism, force of ideology, geography, history, etc.) have contributed towards this war between man and man, although Religion, perhaps, is still, inherently, a potent factor. Man, collectively, has so far not understood even the elementary truth that the so-called ‘Prophets,’ if they all ‘came from One God’ as claimed, could not have brought different
‘messages’ to one Human race, nor could they have come to pitman against man. Other causes are even more frivolous from the biological or scientific point of view and this catastrophe of schism has happened to the race of Man, as Man - collectively as a species - is ridiculously deficient in understanding the intention of Nature and only very few individuals (perhaps not even one in a million) can see and think universally. Thus, this collective stupidity of the Human race is resulting in its un natural development towards decay and possible ultimate extinction.”
9 Violence resulting from sectarianism, communalism, or other prejudices is prominent in many countries of the world today. Life has become suffocating because of the destruction that is going on in the world. Muslim and Hindu leadership failed to heed Allama Mashraqi’s call for unity, and it resulted in a long history of confrontation. It is clear then that in order to bring peace to not only the Indian subcontinent, but also the world, we need to create a society based on Mashraqi’s philosophy and wisdom. A society that accepts various ethnic, religious, and cultural groups; a society where justice, brotherhood, equality, and service to the community prevail and communalism and sectarianism are extinct. We must seek inspiration from his teachings and establish an atmosphere where we can live in peace. This is the only true solution to the tribulations that mankind faces today.