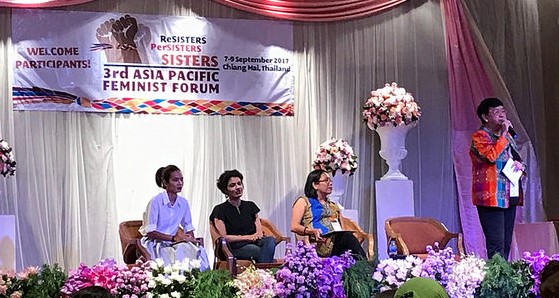 More than 300 feminist activists, women human rights defenders and global allies are gathered in Chiang Mai, Thailand under the banner of '(re)Sisters, (per)Sisters and Sisters', for the 3rd Asia Pacific Feminist Forum (APFF 2017). This 3 days Forum (7-9 September 2017) has been organised around the framework of 'Anger, Hope and Action'.
The first plenary of the forum saw Judy Taguiwalo, a human rights activist and former Minister for Social Welfare and Development, Philippines, arousing the anger of feminists, from different constituencies, against patriarchal, right-wing and authoritarian leadership in the Asia Pacific region, that is using women’s bodies as a site of power and is usurping their fundamental rights. This resounding anger is directed against patriarchy, oppression, sexual and domestic violence, unjust and unequitable workplaces, treatment of migrants as slaves, ostracism of people with different sexual identities, discrimination of the disabled and of indigenous women, extrajudicial killings of women human rights defenders, and so on and on.
Sarah Zaman, a feminist and human rights activist from Pakistan, directed her anger towards a system that is failing women at every level - the police not registering cases of violence against women, an overburdened judiciary delivering flawed and delayed judgements, faulty interpretations and poor implementation of existing laws. While 44% of 5-16 years old children in Pakistan are out of school, and basic healthcare services are poor due to supposed lack of resources, the budget for military and debt services is shooting up phenomenally. The military budget in Asia Pacific has gone up by 44% in last 9 years, but there is no money for public services. Corrupt governments sans any accountability have failed miserably to deliver legal and social justice to people. Does this not make us seethe with rage for the injustices that are happening to not only us, but more importantly to others? wondered Sarah.
Women are at the forefront of resistance against injustices
For Cristina 'Tinay' Palabay, Secretary General of Karapatan and a woman human rights defender under attack by Philippines government, every day is a day of seething anger for women. She said that in her country people are living in a pseudo-democracy where extrajudicial killings have become the order of the day. Innocents, especially those who are poor, are being labelled as drug peddlers and killed with impunity, indigenous communities are being termed as rebels and bombed, the police is playing the role of a 'criminal syndicate' and fabricating worst ever scripts.
Corporate capture IS THREATENING SUSTAINABLE DEVELOPMENT FOR ALL
Corporate power is dominating over the country’s sovereignty and natural resources. Rise of authoritarian regimes has shrunk civic spaces for dissent. This is true to a large extent for other countries of the region as well. All this has led to a human rights disaster. Cristina finds hope in so much as this seething rage is now taking the form of people’s resistance towards a callous system. Women are at the forefront of this action of solidarity.
Reasey Seng of Cambodia, an expert in linking grassroots movements with global processes to achieve development justice, directed her anger against male dominance and power over women’s bodies. She spoke with CNS (Citizen News Service) at the APFF 2017. Patriarchy sets the rules of how girls/ women should dress, behave, speak (or rather not speak) and excludes them from decision-making and economic development. Men are devoid of humanity as they nurture the faulty notion that a strong military is required to maintain peace. Power, privileges and money are used by patriarchs to oppress and suppress women. Women need to bring back humanity to this world, and replace war with peace, as war threatens their very existence.
Women united cannot be defeated!
But enough is enough! All feminists need to join hands in solidarity, cross the forbidden lines drawn by patriarchy and take the power back which is rightfully theirs. The time has come to direct this anger, that has been suppressed within women for ages, to be channelized constructively to bring about a transformation. Women want development for all people and not that people be used for development of a select few. Women united cannot be defeated! Their solidarity will strengthen the resolve to dismantle systems that produce obscene levels of inequality, drive climate change, and violate women’s human rights, said Kate Lappin, Regional Coordinator of Asia Pacific Forum on Women, Law and Development (APWLD).
(Shobha Shukla is the Managing Editor at CNS (Citizen News Service) and the above article is based upon her interview series of key women leaders in Asia Pacific region who have played a key role in striving for development justice. Follow her on Twitter @Shobha1Shukla or visit: www.citizen-news.org)