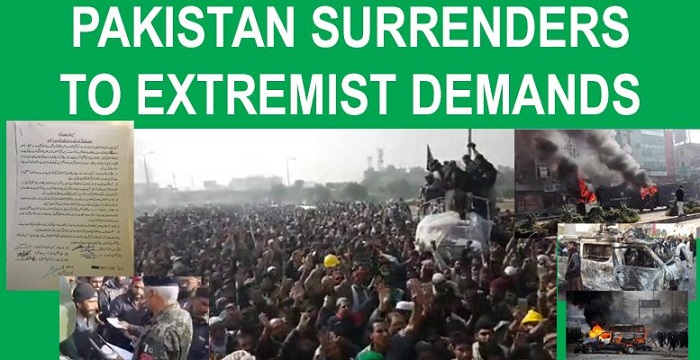 Responsible for Equality And Liberty (R.E.A.L.) suggests to the Pakistan government, the frustrated among the Pakistan public, and those who believe in equality, liberty, and democratic processes another direction: Choose Universal Human Rights.
The path of religious extremism is only one path that Pakistan could choose. Other alternatives could be to reconsider the position of Pakistan in making its rights and legal systems dependent on pluralistic values that show true respect and confidence in freedom of religion and faith, rather than an insecurity that demands religious extremist control all political and legal futures in Pakistan. A faith and culture that is strong should also be strong enough to respect others and understand others without the fear-based extremism that demand total and unquestioning obediance to extremist views, and which will use violence and disruption if its adherants do not get their way. Surely such appeasement of extremism undermines the foundational capabilities for democracy and democratic principles.
Pakistan is a signatory to the Universal Declaration of Human Rights (UDHR) (signatory as part of December 10, 1948 United Nations process), as well as the International Covenant on Civil and Political Rights (ICCPR) (signed 2008, ratified 2010). The ICCPR is the legal treaty to the UDHR. Within the UDHR, Article 18 states: "Everyone has the right to freedom of thought, conscience and religion; this right includes freedom to change his religion or belief, and freedom, either alone or in community with others and in public or private, to manifest his religion or belief in teaching, practice, worship and observance." This is part of the ICCPR as well, as part of its own Article 18, which states "1. Everyone shall have the right to freedom of thought, conscience and religion. This right shall include freedom to have or to adopt a religion or belief of his choice, and freedom, either individually or in community with others and in public or private, to manifest his religion or belief in worship, observance, practice and teaching. 2. No one shall be subject to coercion which would impair his freedom to have or to adopt a religion or belief of his choice. 3. Freedom to manifest one's religion or beliefs may be subject only to such limitations as are prescribed by law and are necessary to protect public safety, order, health, or morals or the fundamental rights and freedoms of others. 4. The States Parties to the present Covenant undertake to have respect for the liberty of parents and, when applicable, legal guardians to ensure the religious and moral education of their children in conformity with their own convictions."
When ratifying the ICCPR, Pakistan stated that "The Government of the Islamic Republic of Pakistan reserves its right to attach appropriate reservations, make declarations and state its understanding in respect of various provisions of the Covenant at the time of ratification." Pakistan's reservations to such universal human rights under the UDHR and ICCPR have included the following reservation (June 27, 2011) regarding Article 18: "shall be so applied to the extent that they are not repugnant to the Provisions of the Constitution of Pakistan and the Sharia laws."
Pakistan is also a member of the Organization of the Islamic Conference (OIC) which created its own version of a human rights declaration, titled the "Cairo Declaration on Human Rights in Islam (CDHRI)" adopted on August 5, 1990. Unlike the other universal human rights documents, the OIC's version of "human rights" denies religious freedom, making human rights dependent on the interpretation of Islamic Sharia law by individual OIC's states' members. As stated in CDHRI Article 24, "All the rights and freedoms stipulated in this Declaration are subject to the Islamic Shari'ah." As stated in CDHRI Article 25, "The Islamic Shari'ah is the only source of reference for the explanation or clarification of any of the articles of this Declaration." But even within Shari'ah there are interpretations by scholars. Why cannot confidence, rather than fear be an interpretation? Why cannot respect for others, rather than "compulsion" in religion not be an interpretation?
If Pakistan's majority faith and religious culture is secure, then it should not need such artificial demonstrations of piety and rejection of pluralism to defend it. It is time for Pakistan to recognize the foundational problems that it faces in its version of democracy and human rights, and understand that democratic values and human rights must be universal, to be responsible for the future of the diverse people and needs in Pakistan, and to be responsible in Pakistan's future with the world.
Courage and confidence in equality, not surrender and fear of extremists, offers a real pathway for peace and prosperity for Pakistan's future. No nation can build a proud nation for its children, if on any day, a handful of extremists can readily drag it to its knees. We urge the people and government of Pakistan to stand up and reject the attacks on democracy and representative government by such extremists.
We urge Pakistan and its people to be Responsible for Equality And Liberty.
(* NOTE: The TLY is also referred to in English media as Tehreek-e-Labaik Pakistan, Tehreek Labbaik Ya Rasool Allah, Tehreek-e-Labaik Ya Rasool Ullah, "TLYP," "TLYR".)