Who will speak for Pak-enslaved Kashmir? By Manzoor Ahmed 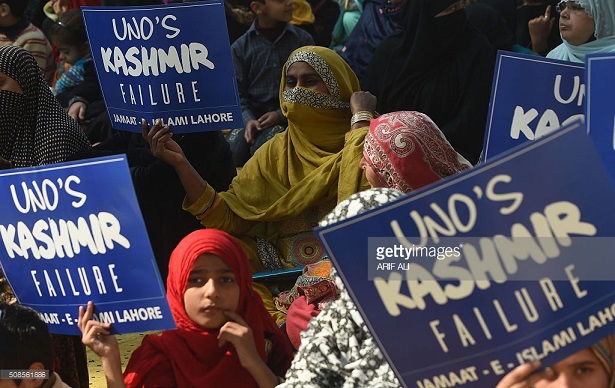 There is always lot of talk about Kashmir in the media as well as in the political circles across the world but rarely does any of the writings or discussions venture to look into the life and times of people who live in that part of Kashmir which is under the illegal occupation of Pakistan.
The illegally occupied territory of India, which the usurper Pakistan calls `Azad Kashmir`, has been a slave colony of the Punjabi rulers of Islamabad, and Rawalpindi, ever since Pakistan hoodwinked the international community, the UN included, in 1948. After the Pakistani intruders were pushed out of Kashmir, the UN mandated that Pakistan withdraw its troops from the entire Kashmir before any discussion on the dispute can take place. Pakistan refused to do so and continue to occupy a vast territory of Kashmir which, over the years, it turned into a slave colony first and then a terrorist enclave.
A Pakistani autorAnamZakaria put the plight of the Kashmiris in Pakistan quite directly and succinctly. Writing in Dawn (February 5, 2018), Zakaria pointed out how the people of Kashmir in Pakistan occupation lost their voice long ago. ``A close look, `` the writer argued, `` would reveal a dire state of affairs…2017 marked the highest number of ceasefire violations since the 2003 ceasefire agreement. Already, over 200 ceasefire violations have been reported in 2018.Men, women and children living by the LoC face the brunt of cross-loC shelling, but the Pakistani government stays removed from these areas.`` And yet, the frightened population is not relocated to safer places. The Generals visit the shelled areas but do little else---the people living in these areas act as human shields for Pakistan Army.
Zakaria, writing about a visit to the area, draws even more dismal picture of the area: ``Roads are full of rubble, sewage pipelines are not laid, and doctor-to-patient ratio is alarmingly low. Water and power shortages undermine economic activity in an area where dams have been constructed to fulfil the rest of Pakistan’s energy needs. Royalties are not given because (the area) is not a province of Pakistan, but when it comes to implementing projects that benefit other parts of Pakistan, the area is taken for granted as a part of the country. No permissions are sought from the local government before launching projects that aid Pakistan’s development. ``
This is not a new story though. Ever since the area was forcibly occupied by Pakistan, the people and their land were treated with disdain and indifference till the Generals and politicians found it be a suitable place to locate their terror factories. Large parts of the beautiful land was parcelled out, or allowed to be occupied by various terrorist organisations, especially after the Afghan Jihad ended and there was no better place for the newly armed and trained terrorists to be relocated. It was away from the centres of power but well within the control of the Generals.
By then, the Generals had decided to launch a proxy war against India in Kashmir and the occupied Kashmir came in handy to set up training camps for the terrorists before they were `launched` into the Indian Kashmir. The Kashmir occupied Pakistan slowly became a vast campus of terrorists with Harkat-Mujahideen, Lashkar-e-Tayyeba, Hizb-ulMujahideen and several other terrorist outfits given free land to set up camps.
Soon enough, terrorists from these `special terrorist zones` began taking over the civilian areas, forcing people to either flee or live in dread every day. For instance, residents of Kotli, Chinari, Mirpur, Gilgit, Diamer and various parts of the Neelum Valley have been demanding the state to dismantle these terrorist training camps and push out the terrorists. During one of the protest marches, the residents told the newspersons that their lives had become a living hell by the terror training camps as ``the lawless men, who train here, plunder local villages and molest the women of the area.``
With Pakistan concerned only about terrorists and their welfare, the residents of the area were left to fend for themselves. There was no credible education system, health care delivery was absent, so were opportunities for employment. The local economy was run by the terrorists and their camps. The state offered no succour. In a paper published in July 2016, `A Critical Study of Primary Education Situation in AJK State`, two scholars from the Department of Sociology, Nankai University, Tianjin, China (one of them Pakistani), pointed out that the region `` is an underdeveloped state with low income where public education is a big sector`` but the statistics presented a dismal picture. ``The children out of school are 43% with 35% dropout rate and teachers absent rate from school is 12%, language outcomes are very poor with wide regional disparities. 41% schools are without buildings 87% without electricity, 73% are without availability of drinking water and 82% are without boundary walls.``
It is time to pay attention to this region which has been kept as a colony by Pakistani rulers; the people of this region too need freedom, basic infrastructure and secure life.