Slump in fight against #AIDS can derail progress made so far. By Shobha Shukla 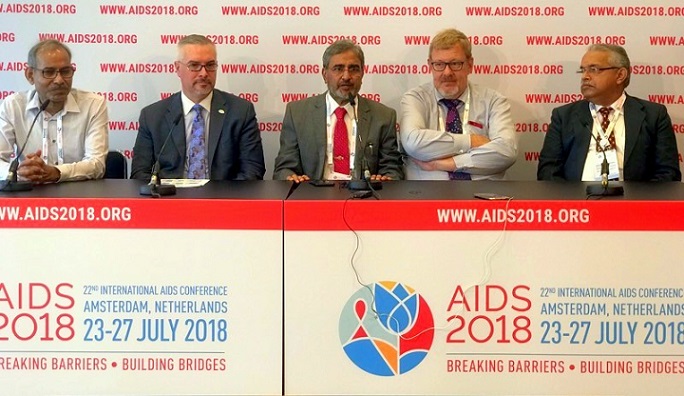 Tremendous progress against AIDS over the past 15 years has inspired a global commitment to end the epidemic by 2030. Out of the total 36.9 million people living with HIV (PLHIV) globally, 21.7 million of them were on antiretroviral therapy (ART) by 2017. But we should also note that 1.8 million people were newly infected with HIV in 2017" said Dr Ishwar Gilada, who was Chairing a session at 22nd International AIDS Conference (AIDS 2018) in Amsterdam, Netherlands.
"If we are to meet the UNAIDS 90:90:90 targets and Sustainable Development Goals (SDGs) - one of which is to #endAIDS by 2030 - we cannot afford to slacken HIV prevention or delay provision of ART to every PLHIV and monitor viral load" added Dr Ishwar Gilada, who is also the President of AIDS Society of India (ASI), and among the first doctors who began HIV care in India when first case got diagnosed in the country.
Looming danger of sidelining HIV prevention
Dr Gilada also highlighted the looming danger of sidelining HIV prevention in recent years. "Global new HIV infections have declined by just 18% in the past seven years: from 2.2 million in 2010 to 1.8 million in 2017. If business as usual continues, then we will fail to reach the target of less than 500,000 new HIV infections per year by 2020," he warned. He said the global community is able to think and strategize for the likes of Test and Treat policy or 90:90:90 target and dare to dream of the target like #endAIDS by 2030, only because of India's role in making ART affordable and accessible - at almost 1-3% of global cost and today India is able to meet 92% of global requirement of ART.
"UNAIDS too warned before AIDS 2018 that the global response to HIV is at a precarious point and the pace of progress is not matching global ambition, calling for immediate action to put the world on course to reach the critical 90:90:90 targets by 2020 (that is, 90% of all PLHIV will know their HIV status; 90% of the people diagnosed with HIV infection will receive sustained antiretroviral therapy (ART); and 90% of all people receiving ART will have viral load suppression)" shared Shobha Shukla, Executive Director, CNS (Citizen News Service).
New action plans needed for a breakthrough
Professor Dr JÃ¼rgen Rockstroh of University of Bonn in Germany and Governing Council member of International AIDS Society (IAS) said that, "Despite recent improvements in accessing HIV treatment and care in the region, the response to the HIV epidemic still faces many challenges. Only 28% of the estimated PLHIV in eastern Europe and central Asia were reported to be receiving HIV treatment in 2016, is far below the western and central Europe average of 76% and the global average of 53%. This indicates an alarming situation in the region as a whole to move towards achieving these targets. Furthermore, about half of the people diagnosed with HIV are diagnosed at late stages and lifesaving treatment gets delayed. Many PLHIV thus start treatment too late and already show signs of widespread immune system damage, leading to excess morbidity and mortality. New action plans are needed to achieve a breakthrough."
Can we afford to slow down momentum against AIDS?
Dr JosÃ© M Zuniga, President of International Association of Providers of AIDS Care (IAPAC) said, "The 90:90:90 targets and goal to end AIDS by 2030, can be achieved. But, there can be no progress without action, and our ability to act is attenuated if much-needed funding is jeopardized. Under the Trump Administration's 2018 budget proposals, global health funding for programs, such as the PEPFAR, would be hard hit. Bilateral programs would experience a whopping $880 million cut. US contribution to the Global Fund to Fight AIDS, TB & Malaria would be cut by $225 million. The USAID and other programs would also see cuts- malaria(44%), TB (26%), and MCH(8%). It will slow the forward momentum against AIDS."
Significant new HIV case get diagnosed by private sector
Prof R Sajith Kumar, Governing Council member of AIDS Society of India (ASI) said, "India boasts of an efficient public private partnership with a large proportion of patients under dual care as well. Almost 50% of HIV infected people are diagnosed by private practitioners, though many of them subsequently go to the Government for further care. ASI plays a great role by bringing both groups together under one academic entity. Viral load monitoring and resistance studies that have been extensively promoted by ASI, will contribute to progress towards achieving the 90:90:90 target that is part of India's National Health Policy 2017."
Universal Health Coverage (UHC) remains a big challenge
Reflecting on the current scenario in India, Dr RS Gupta, Deputy Director General of National AIDS Control Organization of Ministry of Health and Family Welfare, Government of India said that, "The good news is that incidence and prevalence of HIV has declined sharply, as a result of improved prevention, care, support and treatment. However universal access of comprehensive healthcare services to all PLHIV and reaching out to the hidden and unidentified populations remains a big challenge in achieving 90-90-90 by 2020 and eliminating HIV by 2030".
(Shobha Shukla is the Managing Editor of CNS (Citizen News Service) and is leading CNS onsite at 22nd International AIDS Conference (AIDS 2018) in Netherlands. Follow her on Twitter @Shobha1Shukla or @CNS_Health or visit www.citizen-news.org)