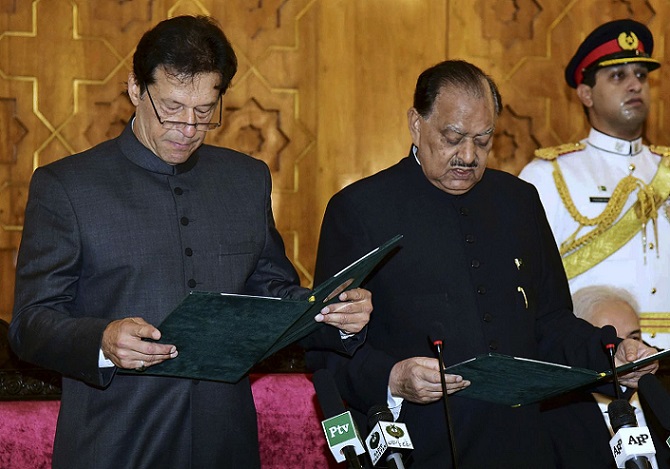 As Imran Khan assumes office of the Prime Minister, amidst high hopes from those who elected him, the biggest challenge looming before him is not in finding a way to negotiate with India but how to stop the burning down of girls' schools in Gilgit Baltistan by terrorist groups. This cycle of violence, timed to coincide with his taking over as the new premier, is a direct challenge thrown at him by terrorist groups.
It is a serious problem and there is no way he can side-step it. Burning down of girls' schools evokes fear among the local community and embolden terrorist groups who want to impose an extremist ideology on the country. This is not what Imran Khan has been saying---he has projected himself as a liberal and honest leader who has promised to work for the welfare of the people. Girls going to school freely and without fear is an important feature of a country he has promised his people.
What will make the new Prime Minister's task more difficult is that terrorists, if left unchallenged on this front, are likely to make his life difficult by expanding their influence over areas from where people have voted his party to power with high hopes of driving out terrorists.
Many of these terrorist groups are patronised in some way or the other by Pakistan Army, the same omnipotent power which has enabled Imran Khan to come to power. The patron is not going to be happy if Imran Khan were to order a crackdown on terrorist groups responsible for this arson. If terrorists were to enjoy the kind of immunity they have been used to, it will signal the failure of the new government and it will not take much time for the people to lose hope in their new Prime Minister.
The burning down of over 14 girls' schools in the Diamer district in the recent past week is not something Prime Minister Imran Khan can ignore because, as English newspaper Daily Times in its editorial (August 6), succinctly put it: ``From the bullets Malala Yousafzai received for her undeterred quest for education, or the massacre of many school children at the Army Public School in Peshawar; Islamic extremists have been targeting, every Pakistani child's right to an education. ``
This is not the first time that Diamer's educational institutions have been targeted; in fact girls schools in the district have been under attack since 2004. Diamer has very few schools and girls number only 20 per cent of the students. By attacking the girls schools, the terrorists want to keep the girls behind locked doors.This is part of the terrorist plan to keep the region in perpetual subjugation. In this plan, the state is equally complicit. Selected terrorist groups have been handpicked and planted in Gilgit Baltistan to radicalise the Sunnis and drive out or terrorise the dominant Shia community and create another sanctuary for terrorist activities in an area closer to the Indian border.
The English daily, The News, in its editorial (August 7), pointed out that militancy ``has long thrived in Gilgit-Baltistan, with Diamer being a particular hotbed of sectarian outfits. The National Action Plan calls for action against all militant groups â€“ an instruction which has rarely been followed. The next government's biggest challenge will be to continue the war against militancy and indeed to become smarter in how it is waged...The attacks on education for girls have to be strongly countered and those who agree with such a narrative need to be convinced otherwise. Education is far too important for any space to be ceded to extremist elements. ``
The state, including the army, has promoted the growth of terrorists in the region for various reasons. Two of these reasons merit specific mention. The people of Gilgit Baltistan, different from the mainland Pakistanis in culture, tradition and religious belief, have been demanding autonomy for long. They have in the recent times been miffed by the manner in which the federal government has run roughshod over their persistent demand for some benefit from the the China Pakistan Economic Corridor which cuts through the heart of their homeland. The corridor has proved to be a destructive venture in the region with roads, bridges and other infrastructure being built after recklessly mowing down mountains and forests and filling rivers and streams with debris. The local communities, which have lost their farms, orchards and meadows, are finding to their chagrin that there are no jobs for them either. One reason is the lack of education.
Although Imran Khan has been quick to condemn the attacks on schools and has stated that girls' education was an integral part of his government's policies, he has not much time to walk the talk on this issue.