Rural Population in Pakistan and India victim of food insecurity. By Abbas Kassar 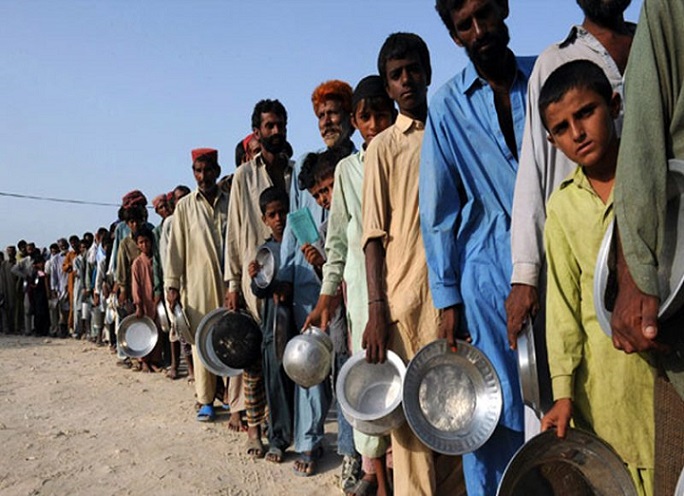 Indian farmers hit by drought and debt displayed the skulls of fellow farmers, believed to have committed suicide, and placed live rats in their mouths at a protest in Delhi calling on Prime Minister NarendraModi to save them from starvation.
"It has come to the stage where hundreds of farmers are committing suicide due to the pressure of not being able to repay these loans", said Rajesh president of South India peasant's union, while leading the protest.
More than 12,600 farmers and agricultural laborers committed suicide in 2015 alone â€“ making up almost 10 percent of all suicides in India, according to the National Crime Records Bureau (NCRB). Almost 60 percent of the suicides were caused by bankruptcy and indebtedness or farming-related issues, said the NCRB and almost three-quarters of victims were farmers cultivating land plots of less than two hectares (five acres).
India and Pakistan both are facing no or little rains since last 3 years and also more than 50% less water from rivers/canals at tail end districts resulting less than half harvest of food crops like wheat, rice, vegetables. Coupled with no relief from governments 70% population of both countries living in rural villages continue to be victim of food insecurity, malnutrition and under nourishment.
According to Food and Agriculture Organization of UNO number of people in whole world who could get only one-time meal in a day was 815 million in 2016 while this number rose to 849 in 2017. Out of these 450 million were in Asian countries. According to International Hunger Index of FAO, Pakistan was placed at number 106 out of 119 worldwide while India was at number 100. It means India remained hungrier than Pakistan. In countries inflicted with civil wars or domestic conflicts like Syria, Yemen, Iraq and Afghanistan situation was more critical.
Poor nutrition remains colossal and universal problems with one in three people on the planet affected by some form of malnutrition which, according to World Food Program, continues to affect 150 million children worldwide. It can be matter of life and death as also undermines economic development. Africa has highest prevalence of hunger but Asia has highest number of undernourished people.
In Pakistan's Thar region children continue to die of hunger and malnutrition. According to figures of media reports of Pakistan, during 10 months of 2018 as many as 534 children had died of hunger. During the last 10 years inefficient rule in Sindh province of Pakistan thousands of children had died in Thar as rulers have turned their ears to hear screams of parents of dying children instead, they remained busy in loot and plunder of national wealth through money laundering and building palaces in foreign countries.
The health department revealed that around 1,500 children die due to malnutrition each year as a result of infections and a shortage of proper medicinal services in the remote part of the province.
The United Nation's Children Fund, in a report released in April, states Pakistan remains one of the countries in the world with the highest infant mortality rate stating: "Pakistan is the riskiest place to be born as measured by its newborn mortality rate.
Sindh being in tail end of Indus river, peasants here are deprived of sufficient water required for cultivation. Whatever crops they grow, they cannot get sufficient price of same in market. Sindh produces sugarcane, wheat, rice and vegetables in big quantities but because of acute shortage of water coupled with no rains in Sindh staple food production has been less than 50% which was main cause of critical situation of food insecurity. According to Zahid Bhurgri general secretary of Sindh Chamber of Agriculture with no or little cultivation, growers were unable to pay agriculture loans. In such a situation banks have issued notices to auction their lands aggravating their worries and miseries. Growers have made appeal to prime minister to order postponement of loan recoveries. ZubairTalpur president of Sindh Growers Ittehad said sugarcane crop is cultivated on hundreds of thousands of acres in Sindh but mill owners were exploiting them by late start of crushing season, purchase rate half the market and withhold payment to growers. He said growers owe around Rs.44 billion of starving peasants and growers from sugar cane supplied to mills last year.
According to "Vision 2030" of the Planning Commission of Pakistan, about half of the population in the country suffers from absolute to moderate malnutrition, with the most vulnerable being children, women, and elderly among the lowest income group. Out of 70% population of Sindh living in rural villages 60% was facing food insecurity. In order to solve the problem, we shall have to rethink our approach of agriculture sector and to start food systems that are truly sustainable and nutritious.
(writer is senior journalist bureau chief of daily Messenger at Hyderabad, also writes for Pakistan Christian Post of USA.He is general secretary of Hyderabad union of journalists. Can be reached at kassarabbas@gmail.com; twitter, linked-in &wordpress @kassarabbas.)