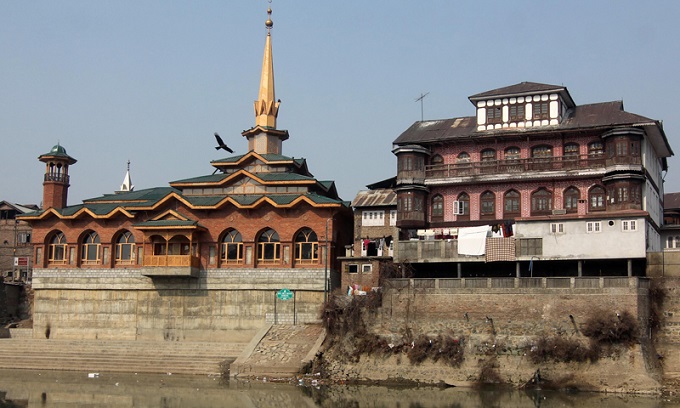 Not very long-ago, Kashmir once was the seat of Sufism and Sufis always joined lacerated hearts and bleeding souls in all cross-sections of society through their truthful discourses and practices of what they had preached.

However, seeing Kashmir bleeding today, my heart cries! What is most heart-rending is that for the last three decades, Kashmir has been turned into hell. Unfortunately, Kashmir of today has become a valley of fear.  Kashmir is bleeding today owing to the separatists who themselves lie in magnificence and affluence while the ones they tend to represent, are misguided by them to be butchered by the forces’ bullets and pellets.

The irony is that they require Indian blood in our hospitals, to be infused with life only to bleed India later. It has to stop now, and the unassuming, poor and innocent Kashmiris have to be brainwashed of the vitriolic mindset they have been subjected to.

Strange as it may sound, it was here that the Shaivite Bhakti movement amalgamated with the Sufi tradition. Sufi Nund Rishi (Sufi Sheikh Nooruddin Wali), the Sufi sisters, Dehat Bibi (Lal Ded), Lalleshwari, Shanga Bibi and Shyam Ded, were once the pride of Kashmir. Kashmiri mysticism is, in its essence, a message of love. It is reflected in the pagoda of the Charar-e-Sharif with its distinct Buddhist influence and composite culture. It aims at creating harmony within the discordant elements of society.

Kashmiri rishis and Sufis were not miracle mongers. Their greatness lay in their loving hearts. It has been said in Kashmir that bam sadhu could read a man’s inner heart by merely looking at his face. Born a Muslim, one of the most loved Sufis, the Shaivite yogini (woman saint) Lal Ded was the mentor of Nund Rishi. The Sufi rishis saw a perfect congruence in namaz and yoga. Nund Rishi’s struggled to become a vegetarian even while he tried to shake off the temptations of partaking a meal of roasted fish, the smell of which was wafting towards him, is charmingly narrated by one and all in the valley.

It was Nund Rishi who made Kashmiri woman Sufi saint, Lalleshwari immortal by giving reverence to her and also using her references and anecdotes in his discourses and that’s why, in his khanqah, women were also allowed equally. Indeed the final reconciliation between Mir Mohammed Hamadani (son of the great mystic and Oersian theologian Saint Syed Ali Hamadani) and Nund Rishi, was brought about by the lucid logic and persuasive eloquence of Dehat Bibi - young female disciple of Nund Rishi - who has a dargah (shrine) in her honour, very near the spot where the great debate between the two masters, one, a determined protagonist of orthodox Islam and the other, an exponent of liberal Islam and Kashmiriyat that blended the best of Islam and Vedanta, took place.

Very popular in the rustic areas, Sufi Bamuddin propagated non-violence, respect for all faiths, equality for women and encouraged vegetarianism out of his regard for the divine in all life. The concept of nirvana (ultimate heavenly bliss) and moksha (redemption) is in no way different from that of tasawwuf (as mystic consciousness is known in Persian) in Islam. So vehemently Kashmiris rallied behind Bamuddin that the Srinagar royal court was compelled to retract from its regressive proselytising positions.

Sufism or tasawwuf advocates the peaceful co-existence of all faiths. It is differently defined by various writers. The Sufis taught about the practice of virtue, purification of the soul and divine love. Thereby, they raised their lives from the mundane to spiritual. They emphasised the inward nature of things rather than the outward. Sufism is a synthesis of Islam, the Bhakti movement, and Vedantism as recorded by Dara Shikoh in Safinatul Aulia. Even a cursory glance at a Sufi’s life shows that his chief mission is to heal lacerated hearts and join separated souls. A Sufi’s Islam from his khanqah (seat of learning) never advocated force. It was these Sufis who had spread Islam in India and not the sword flailing and marauding kings.

States Jalabala, “The Sufis, born out of Islam that had a welcome presence here and a relationship with India much before the invasion by marauding hordes that ravaged and plundered India in the name of religion, firmly distanced themselves from the power and authority of the invaders.” Echoing Vedanta, the Sufis saw God’s presence everywhere, in everything, in all time and space. Religious distinctions, Muslim or Hindu, meant nothing to such a liberal, all-encompassing, faith.

Kashmiriyat, that is a beautiful blend of Shaivite and Islamic values or in other words, the Rishi-Sufi tradition has unfortunately turned into violence in the form of ruthless murders, stone-throwing and pellet guns. The heaven has now turned into a hell. Gopal Sharman, the great Sufi and actor cum educator of the Akshara Theatre, once said that seeing the violence and death in Kashmir, it ailed his soul as it was a land, rather a real gem of the conglomeration of Rishi-Sufi tradition with the plurality and of cultural assimilation. What is very sad is that Kashmiri Pandits have been thrown out for their homeland in the name of religion.