Without procedural the substantive law meaningless hence USA should introduce its institutions in Afghanistan for success of US-Taliban agreement. By Hem Raj Jain 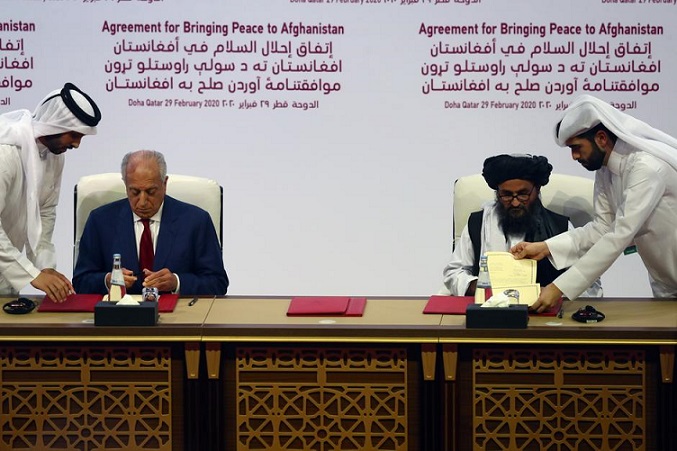 Anybody who knows anything about law knows that what is desired is mentioned in substantive laws, but it can be achieved only through proper procedural laws. Similarly, the objectives in Afghanistan can be achieved by the USA only when the elaborate & appropriate State- apparatus and Constitution and laws (national & international) of Afghanistan are in place. Therefore, agreement (https://www.state.gov/wp-content/uploads/2020/02/Agreement-For-Bringing-Peace-to-Afghanistan-02.29.20.pdf ) reached between USA and Taliban on February 29, 2020 can bring peace and justice to Afghanistan and to USA & its allies only if the USA realizes some ground realities and does as mentioned below: -

(1)- Some forces may be victorious or undefeated in war but that does not mean that they can rule the territory also for any considerable period. Hence coming to power of Taliban is no guarantee for stability in Afghanistan through Taliban. The case of ‘Marathas’ in India is educative in this respect where they practically won battles all over India (after decline of Mughal empire) but could not rule India.

(2)- In modern world minimum 6 elements are necessary for success of any political model namely democracy, secularism, rule-of-law, modern science & technology, mobility and ‘new horizon for mankind’ (which sooner than later, is bound to make space and planets an integral part of mankind, which will start using artificial intelligence, robotics, thinking machines etc in a big way). Hence, only those countries will succeed which will adopt these essentials of modern world [Afghanistan (which has already enjoyed modern political / State institution for the last 18 years) is no exception]. Therefore instead of relying more on the governments of Afghanistan headed by any (either Taliban or present ruling dispensation or any other) or on other neighboring countries like Pakistan, India, Iran etc,  the USA rather should rely on the people of democratic Afghanistan by ensuring that they manage their State matters through Constitution and laws (national & international).

(3)- But it is easy said than done for the simple reason that the majority of people in Asia and Africa (on their own) are not capable of running secular democracy. The case of Muslim-world and Hindu India is its glaring example where people are more interested in spilling blood and harassing the people (for religion) than in bringing peace & prosperity to their families. The USA should not forget that the West also achieved secularism & democracy after ~ 100 years of war of religion in Europe from 16th to 18th century. Though it is not necessary that Asia & Africa also should adopt secular democracy in similar gory way but without help from the West (led by the USA), it (given their past record) seems to be impossible for them.

(4)- For this to happen, the USA should insist that for some time till elections there can be interim government in Afghanistan (in which Taliban can be given suitable representation) and the fighters / cadre of Taliban can be given proper representation in the security forces (military, para-military and police), administration and judiciary of Afghanistan but there should be a Constitution of Afghanistan [based on democracy (with universal adult franchise and inner party democracy), federalism, rule of law and secularism] before elections for Center and States in Afghanistan.

(5)- The USA should not make fuss if Taliban wants to keep the name of Afghanistan as “Islamic Emirate of Afghanistan’ but in no case (in the Constitution of Afghanistan) the USA should allow to leave the interpretation of Islam open ended because it otherwise will dangerously leave Afghanistan at the mercy of medieval (and at times blood-thirsty) clergy of Islam. The Taliban and other Islamists should be told that the Islam is not a religion like Hinduism (which does not have any book) but is a religion based on sacred books namely Quran, Hadis etc. Hence in modern democratic-secular dispensations too, the ESSENTIALS of Islam can easily be practiced by incorporating these in the Constitution of Afghanistan.

(6)- But all the said measures will not suffice and the USA, in order to achieve its objectives in Afghanistan, will have to do the following too: -

(i)- The USA should insist that there should be NHRC & State-HRC in Afghanistan who will be entitled to intervene in the court proceedings (with the permission of courts) in order to protect (in serious cases) the human rights of the people of Afghanistan.

(ii)- The USA should frame laws to launch a statutory ‘US Human Rights Commission for Afghanistan’ (with its branch offices in Afghanistan) which on the complaints from the people (if NHRC & State-HRC of Afghanistan do not dispense justice) will try to do it with discussion & persuasion (with government & State authorities of Afghanistan) and if these fail then ultimately by directing US Administration to enforce (including even militarily) such human rights in Afghanistan.

(iii)- The USA, in consultation with the government of Afghanistan, should launch a ‘Law Academy’ in Afghanistan in which not only Law students (from Afghanistan and rest of the world) will take the courses (of 3 to 5 years) of Bachelors and Masters of Law, but practicing lawyers from other countries can also take crash courses of few months in order to practice law in the courts of Afghanistan.

(7)- Once this political model with introduction of US-Institutions in Afghanistan stabilizes and succeeds then the same can be replicated in other similarly troubled countries of Asia, Africa etc.

It is hoped that (by taking above measures) the leader of free world the USA will prove to the world that such a prolonged stay of ~ 19 years of USA & its allies in Afghanistan (at the cost of immense lives, blood and money on both sides) was worth the efforts, in the interests of the people of Afghanistan and for human rights friendly global order.