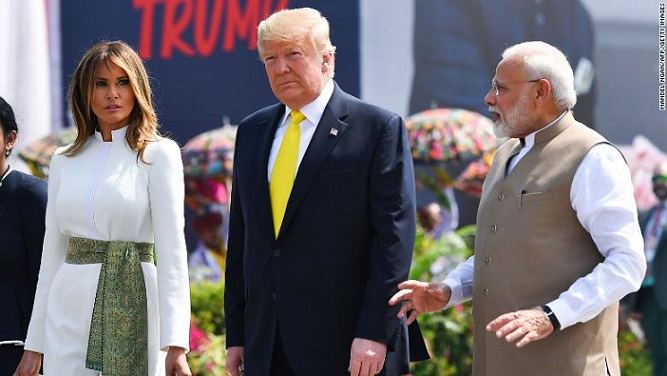 https://www.indiatoday.in/india/story/lac-talks-with-china-end-indian-military-commanders-to-brief-army-top-brass-1686253-2020-06-06. This failure of talk has not come as surprise because before these talks on June 5 China has already made its stand clear through an editorial (with title ‘India should not be instigated by US or media hyping’) in media of Chinese establishment, the ‘Global Times’ that China is furious with India because India has joined anti-China camp of the USA as mentioned at https://www.globaltimes.cn/content/1190685.shtml .

The assurance by China of more such talks in future to resolve this problem is merely a delay tactic by China. But India cannot afford this delay because in the popular perception among the people of India it is another Kargil (in 1999 Pakistan intruded and occupied the heights in Kargil in J&K which India had to remove militarily though ‘Kargil war’ during Vajpayee government). Hence Indians expect (and Pakistanis through their media are instigating Indians) that PM Modi (with a self proclaimed 56 inch chest and self projected macho image, also through surgical strikes and Balakot strikes against Pakistan) should also do the same and militarily remove China from Indian territory of Galwan valley . When ‘Global Times’ in said editorial says that - “[Instead of hyping the situation and forcing the Indian government and military to advance rashly, hopefully, India's public opinions will not be hotheaded or conceited.]”-it does not understand that it may happen in authoritarian China but not in a democratic India where public opinion is always aroused and even respected.

The naive Indians (including most of the commentators in the media) during on-going military tension at Galwan valley are never tired of saying that present India is not India of 1962. By this they try to say that in 1962 India was weak militarily & economically v/s China hence faced humiliating defeat. This is not correct. Rather on both counts India was better than China (As per former Air Chief, the Indian Air Force was more powerful than the Chinese Air Force in 1962 and which is crucial in any modern war). India lost the 1962 war because it did not have political will to fight the war (may be due to mis-conception by Nehru of  non-violence of Mahatma Gandhi type which ironically resulted in ~ 1 million killed and ~ 15 million displaced in most gory situations during partition which was accepted by Gandhi despite declaring that he would never approve Pakistan through partition). The said naive Indians / commentators should know that in contrast, during 2020 Chinese economic & military powers (its defense budget) are 4-5 times more than of India.

In addition to this the situation of India has become all the more difficult due to amendment and repeal of Article 370 and 35 - A of the Constitution and bifurcation of the State of J&K into two Union Territories on and after August 5, 2019 (which in legal terms nothing short of usurpation by India because the political fate of J&K as per IoA is to be decided by the people of J&K and neither by government India nor by government of Pakistan).

This suicidal action of India of August 5, 2019 has negated the ‘Instrument of Accession’ (IoA) of 1947 which brought J&K to India because the relevant part of IoA reads as – “[the question of Accession should be decided in accordance with the wishes of the people of the State, it is my Government’s wish that, as soon as law and order have been restored in Kashmir, and her soil cleared of the invader, the question of the State’s Accession should be settled by a reference to the people. Yours Sincerely Sd/- Mountbatten of Burma]” - which means that whatever territory of united J&K (including Galwan valley, Aksai Chin etc) India was claiming to be its own is legally no longer of India after said action of India on and after August 5, 2019.

Therefore now PM Modi has only escape route that is to request his ‘friend’ Prez Trump to put China ‘at its proper place’ not by military war but first through diplomatic war which the USA can do by: -

(1)- Moving the UN to take actions against China: -  (i)- For investigation into Coronavirus which as per Trump – Administration was made in Wuhan / China and China didn’t do legally expected , as per international laws & norms, to stop this virus (pandemic) spreading from China to rest of the world.

(ii)- for asking China to adopt liberal transparent democracy by abolishing its authoritarian Communist political model which has become a threat to the survival of entire mankind as is proved during this pandemic of Coronavirus.

(iii)- Mobilizing (in case of highly likely resistance to said initiative of the rest of the world) the world community to deny China huge power in the UN (like Veto etc) even by transforming the UN, if necessary and then -

(iv)- Persuading the West and its allies for boycotting China economically & financially.

(vi)- Mobilizing US Congress for passing legislation (H.R. 6948 introduced by Congressman Scott Perry , on May 19 ) to the US House of Representatives Committee on Foreign Affairs , A bill to authorize the President to recognize the Tibet Autonomous Region of the People’s Republic of China as a separate, independent country, and for other purposes,  as reported also at -

(vii)-  Mobilizing the Pacific countries and Quad (including India of 1.37 billion people having a long border and long pending border dispute with China and having a huge exiled Tibetan community in India) to bring strategic pressure on China.

(B)- For solving Kashmir problem - (i)- India to repeal the Article 1 (3) (a) of The Constitution of India and PART II THE STATE (3) of the Constitution of J&K [which illegally show J&K as Indian territory (like any other State of India) and even an integral part of India without any mention of the condition of plebiscite to decide the territory of J&K as per the IoA].

(ii)- For asking India & Pakistan to facilitate a plebiscite in united J&K under Indian authorities (with UN Observers & international media) at the earliest possible after ensuring in united J&K (including Aksai Chin in second stage) the conditions conducive for carrying out such plebiscite required by IoA.

(iii)- For asking India to repeal all said changes made in its Constitution / Laws on and after August 5, 2020 and release all the people of J&K who have been arrested on political basis [out of legally objectionable (in view of IoA) the apprehension of Indian authorities that they may demand plebiscite or independence of United J&K] including those people who have been arrested since August 5, 2019 on political basis. Also for asking India to ensure the peaceful & just rehabilitation of Kashmiri Pandits in Kashmir.

It is hoped that the USA / President Trump will not try to overly exploit the politically highly embarrassing Indian situation of another Kargil and will do as mentioned above to permanently resolve the chronic & gory problems between three nuclear countries China, India and Pakistan.