Another victim of US friendship, India faces imminent threat of converting united- J&K into another Bangladesh by China & Pakistan. By Hem Raj Jain 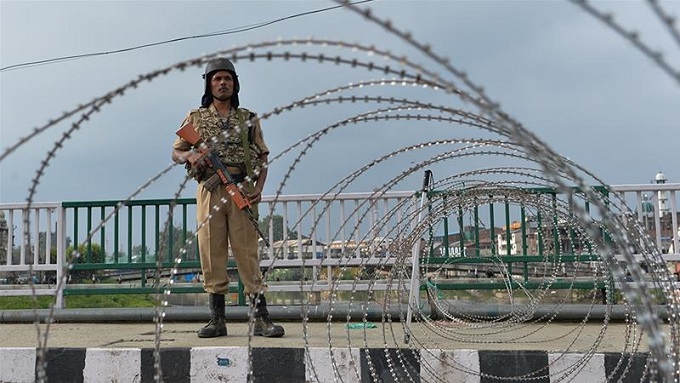 In the line of US allies / strategic partners / friends is now the turn of India (after Ukraine / Crimea, Syria, Saudi Arabia, Afghanistan, Kurds etc) to face territorial dismemberment or destruction / suffering or political chaos or betrayal etc because India tilted excessively towards the USA (in the form of Quad & resistance to CPEC & Gwadar port ) against China despite 2018 Wuhan agreement (where India promised China to work for mutual benefit). India even forgot that the USA is an exclusive private capitalist country (as is evident from Prez Trump speech at 2019 UNGA too) and western (led by the USA) global capital is hugely invested in China hence the  the USA / Prez Trump will not do anything worth the name against China (this is glaringly evident also from the way Trump is protecting China by not demanding UN investigation in Corona pandemic despite saying that this virus was made in laboratory in China).

The Trump administration was working against the vital interests of India was all along clear the way the USA was condoning all the anti-Muslim activities of India including harassment of Muslims all across India including their lynching, giving Babri-Masjid site to those Hindutva forces which against Supreme Court orders demolished it in 1992, amendment and repeal of article 370 & 35-A and converting the State of J&K into two union territories against the letter and spirit of ‘Instrument of accession (IoA), Citizen Amendment Act with sword hanging on Muslims in the form of National Register for Citizen which caused riots too in Delhi in presence of Trump in Delhi, lockdown & illegal arrest of political activists of Kashmir especially after August 5, 2019 etc etc.

Trump might have thought (may be out of Christian prejudices against Muslims from the day of crusades) that Indian Muslims are less in number hence they even with support of Pakistan can’t do any thing against their persecution by Hindutva led Modi-government which is presently ruling Hindu majority India and other Muslim countries will also not intervene in this persecution of Muslims by Hindutva forces.

But India went too far and did not realize especially given the fact that China (which is already angry after August 5, 2019 said measures taken by India) due to CPEC & Gwadar port - (which is question of life & death for China, as was Panama Canal for the USA during Presidency of Theodore Roosevelt) - will not only support Pakistan in every way including militarily but will also do every thing to stop India from harming CPEC in any way (as perceived by China). This is the reason China has captured Indian held territory in the Galwan region so that it can keep watch over strategically important Daulat Beg Oldi road which goes to Siachen and Karakoram pass from where CPEC is very near.

Now after the martyrdom of 20 soldiers and their officers in Galwan, India has no other option than to go to war if China does not vacate Indian territory which it has captured forcefully after April 2020 which China has publicly declared that it will not vacate. It does not require a genius of political science and military strategy to say that it will be very easy for China and Pakistan to militarily snatch J&K (including Ladakh) from India, in view of the following:-

(i)- Knowing that Pakistan alone can not bring independence to Kashmir the Kashmiris have already started thinking of taking Chinese help for the independence of Kashmir valley and Ladakh (as is evident from the advice of former Chief Minister of J&K Omar Abdullah to Muslim Kashmiris to refrain from it https://tfipost.com/2020/06/china-is-not-your-saviour-omar-abdullah-tried-to-give-advice-to-radicals-in-kashmir-got-chased-out-from-twitter/ ) in which later-on PoK can also join under Chinese pressure.

(iii)- It is no secret that the alienation of Muslims in Kashmir valley is at all time high especially after August 5, 2019 which will go a long way in motivating Kashmiris to aspire for becoming an independent country mainly with the military help of China in addition to such help from Pakistan.

(iv)- Since 1971 out of revenge Pakistan is pining to dismember India (as India did with Pakistan in Bangladesh) hence Pakistan can go to the extent of joining PoK (including Gilgit Baltistan) with J&K to become an independent country. Pakistan may even insist that the whole of J&K (including Hindu majority Jammu) should be taken because Hindus can always be expelled from there as Hindus were expelled from West and East Pakistan during partition of India (while Muslims remain the same rather increased a little to about 15 % in India).

If the USA still wants to help its strategic partner India then without going into details of it (which has been discussed in my previous articles) the USA should, without any further delay, ask India to work for dual citizenship (keeping in mind that the last word on India’s partition is yet to be written) and for the independence of Tibet while the USA should do the following:-

(i)- For investigation into Coronavirus which as per Trump – Administration was made in Wuhan / China and China didn’t do legally expected , as per international laws & norms, to stop this virus (pandemic) spreading from China to rest of the world and for asking China to adopt liberal transparent democracy by abolishing its authoritarian Communist political model which has become a threat to the survival of entire mankind as is proved during this pandemic of Coronavirus.

(ii)- Mobilizing (in case of highly likely resistance to said initiative of the rest of the world) the world community to deny China huge power in the UN (like Veto etc) even by transforming the UN, if necessary and then -

(iii)- Persuading the West and its allies for boycotting China economically & financially.

(v)- Mobilizing US Congress for passing legislation (H.R. 6948 introduced by Congressman Scott Perry , on May 19 ) to the US House of Representatives Committee on Foreign Affairs , A bill to authorize the President to recognize the Tibet Autonomous Region of the People’s Republic of China as a separate, independent country, and for other purposes.

(vi)-  Mobilizing the Pacific countries and Quad (including India of 1.37 billion people having a long border and long pending border dispute with China and having a huge exiled Tibetan community in India) to bring strategic pressure on China.

(B)- For solving Kashmir problem - (i)- Ask India to repeal the Article 1 (3) (a) of The Constitution of India and PART II THE STATE (3) of the Constitution of J&K [which illegally show J&K as Indian territory (like any other State of India) and even an integral part of India without any mention of the condition of plebiscite to decide the territory of J&K as per the IoA].

(ii)- Asking India ( also Pakistan) to facilitate a plebiscite in united J&K under Indian authorities (with UN Observers & international media) at the earliest possible after ensuring in united J&K (including Aksai Chin in second stage) the conditions conducive for carrying out such plebiscite required by IoA.

(iii)- Asking India to repeal all said changes made in its Constitution / Laws on and after August 5, 2019 and release all the people of J&K who have been arrested on political basis [out of legally objectionable (in view of IoA) the apprehension of Indian authorities that they may demand plebiscite or independence of United J&K] including those people who have been arrested since August 5, 2019 on political basis. Also asking India to ensure the peaceful & just rehabilitation of Kashmiri Pandits in Kashmir.

It is hoped that by realizing “friend in need is the friend indeed” the USA under Trump - administration, for a change, will stand with its strategic partner the presently beleaguered India, as mentioned above, in the interests of human rights friendly secular democratic global political order.