Public services are essential to COVID-19 response and for fairer and equitable world. By Shobha Shukla 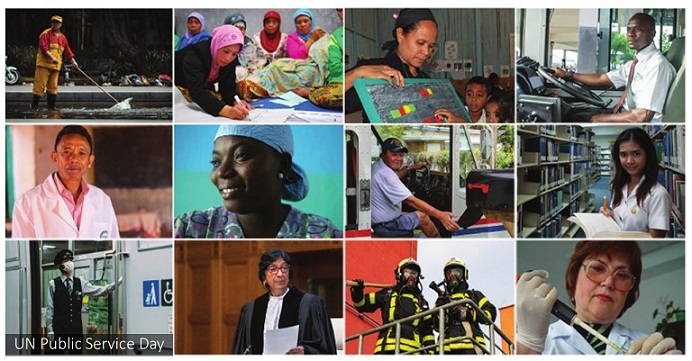 The United Nations marked this year's Public Service Day online celebrations by honouring the women and men who are risking their lives and health to deliver essential public services amid the ongoing COVID-19 pandemic. UN bestowed the UN Public Service Award to seven public institutions from Bangladesh, Botswana, Brazil, Mexico, Portugal, Republic of Korea, and Spain. Liu Zhenmin, Under-Secretary-General for the United Nations Department of Economic and Social Affairs said, "This pandemic has taught us an important lesson about the critical role of public sector institutions in serving the people, whether through provision of health care, education, social welfare, sanitation, or other services, that keep our societies running."

In his message, UN Secretary General António Guterres expressed his deep gratitude to the public servants for their "remarkable acts of service to humankind" - those who are working on the frontlines of the crisis response in the field of public health, sanitation, transportation and education. He also called for ways and means to better protect, recognize and invest in their well-being.

public health spending is not a cost, it is an investment

According to Dr Tedros Adhanom Ghebreyesus, Director General of the World Health Organization, the pandemic has refocussed global attention on the value of resilience, solidarity, equity, and investing in the health workforce. He rightly remarked that, "Investing in health workers is not a cost; it is an investment. It is a political and moral commitment to allocate the necessary resources in health workers as the foundation of a safer and more equitable world. Health workers have a right to decent work, fair salaries and incentives as articulated in the UN approved framework ILO [International Labour Organization]".

It is not just about surviving the pandemic, it is about building back better post-COVID-19 with stronger health systems, more qualified jobs for workers in social and healthcare, including for women and young people, and stronger and healthier populations.

We must protect the rights, roles and responsibilities of all workers serving the public health and other public sectors. We need to translate promises into concrete action that empowers and enables the workers at the foundation for a healthier safer and fairer world we all want, he said.

Countries that have exhibited a better response to the pandemic and managed to keep it under control have been able to do so through their dedicated public services. One such example is South Korea, which was one of the first countries to experience the disease, after China. Korea's Minister of Interior and Safety, Chin Young shared that, "Korea followed the three principles of openness, transparency and democracy and responded with the three strategies of test, trace and treat. Early testing was key to control the pandemic. Dedicated local public officials played a key role in efficient prevention and control, without resorting to extreme lockdowns. Many creative ideas came from them, including mobile drive-through and walk-in screening stations for safe testing. These mobile centres conducted the tests free of charge within 10 minutes and the results were sent to people's phones within 24 hours."

High level of civic awareness, dedication of healthcare professionals, good governance at local and central government level and quality public service were instrumental in controlling the coronavirus and keeping the pandemic under check. No wonder that till to date (June 24) Korea has performed 1,208,597 tests and reported only 281 deaths out of a total of 12,535 people who tested positive, since the start of the epidemic. Its positivity rate is 1.1% and currently there are 1295 infected cases in the country.

However, the Minister cautioned that COVID-19 is far from over. "We need more active international cooperation and collaboration not only to overcome the current crisis, but also to explore the new role of public service in the post COVID-19 era. Now is the time to make efforts to realise more efficient and productive public service as well as promote transparency and democracy."

Kerala state, which recorded the first case of COVID-19 in India, is another example where good governance by public services, including public health surveillance and public health interventions to minimise the spread and mortality. At 0.6% it has one of the lowest case mortality rate in the country, informed Kerala's Minister of Health KK Shailaja.

Then again, COVID-19 has re-emphasized that nurses, who make up 60% of the health workforce, are the backbone of health services. They have always been in the forefront of the fight against any health crisis, including the current pandemic. They are also most at risk of contracting the infection as they spend long hours with the patients everyday. Yet, in many countries they are experiencing shortages of personal protective equipment (PPE), including masks and gloves. Annette Kennedy, President, International Council of Nurses, voiced her concerns at the high number of infections and deaths among the nursing staff globally. She said that apart from lack of PPE, nurses do not have access to regular testing. And to top it all, they are facing a lot of violence and stigma from society at large, including recent kidnappings of nurses for ransom in Mexico. Kennedy wanted governments to fill up the existing shortage of 6 million nurses, improve their employment conditions involve them in leadership and policy making. Unless the system protects them, they will not be able to work to their full potential to protect others.

Rosa Pavanelli, General Secretary, Public Services International (PSI) expressed the complete solidarity of her organisation with the public service workers, many of whose work is hidden, but essential to keep the community going. They have often been scapegoated as being responsible for public spending and increasing public debt. But the current pandemic has suddenly made everyone realise how fundamental and vital they are to keep the communities not only safe but also economically viable. COVID-19 notwithstanding, Pavanelli called for readdressing the current development model and to make efforts to invest in public services to work for economically, socially and environmentally viable sustainable development.