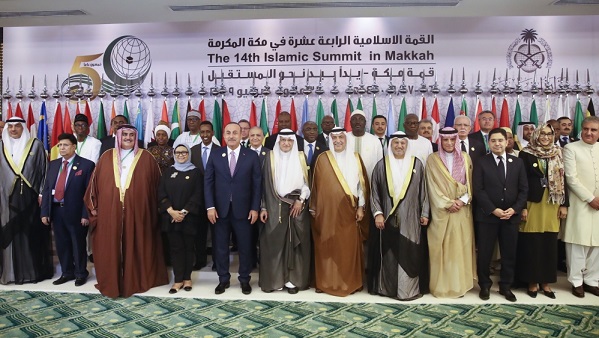 Saudis have only one option that is to hitch their wagon with developments in Greater India (ii)- Only Jared Kushner can bail-out Saudis from present problems of Islamic world.

This refers to remarks made by Shah Mehmood Qureshi, Pakistan’s foreign minister, in an interview to a local news channel of Pakistan on August 5 where he questioned the principled position of the ‘Organization of Islamic Cooperation’ (OIC) led by Saudi Arabia (SaAr) on Kashmir where Qureshi also threatened to garner support of other Muslim countries for Kashmir with or without OIC and which has elicited sharp response from SaAr through the insider Ali Awadh Asseri, a former senior Saudi diplomat as mentioned in his August 17 article at https://www.arabnews.com/node/1720441 .

SaAr has failed to understand that in Kashmir dispute there are not merely three parties namely governments of India & Pakistan and the people of united-J&K but there is fourth party also, the Islam which (in popular perception) has reportedly ‘sacrificed’ the lives of at-least one hundred thousand Muslims for J&K as mentioned also at https://www.aljazeera.com/news/2017/11/forgotten-massacre-ignited-kashmir-dispute-171106144526930.html (including militant-Jihadis not merely from J&K and Pakistan but from other Muslim countries too). Therefore even if Pakistan government wants to forget Kashmir, Islam will not allow the theocratic Islamic State of Pakistan to do it which came in existence by partitioning India in 1947 on the basis of religion and even now communal divide / paranoia is the main pillar on which Pakistan (specially its all powerful military) rests. Especially after August 5, 2019 after which the already harassed Kashmiris are under prolonged lockdown and the government of India has started talking about retrieving Pakistani side of J&K, militarily.

In other words a life and death situation has emerged after August 5, 2019 for Pakistan in Kashmir. Moreover China (despite its intrusion in Eastern Ladakh where it is refusing to restore the status-quo-ante of April 2020) is not willing to help Pakistan in taking Kashmir militarily from India. Hence Pakistan is left with only one option that is to mobilize OIC for helping Pakistan military over Kashmir which will constrain China to come for the military help of Pakistan as China can not afford to ditch Pakistan in such a situation (with CPEC & Gwadar port in Pakistan and in the territories of united-J&K under Pakistan).

But SaAr has created more problems for itself than solved by taking the stand (in  Asseri article) that why should Pakistan complain about lack of Support of SaAr for Kashmir against India when Pakistan did not support SaAr militarily about Yemen against Iran in 2015? SaAr does not understand that unlike India (against which OIC is sought to fight for Kashmir) Iran is a member of OIC and it was the responsibility of the leader of OIC, the SaAr to keep Iran on its side as the new Muslim block countries have succeeded by taking Iran with them. Moreover presently it may or may not be the policy of PM Imran or Pak Military or Pak establishment but it is the policy of Islamic Pakistan to take remaining J&K (at least Muslim Kashmir) from India militarily. Also Pakistan is rightly afraid that if it does not remain or rather become a genuine Muslim country (even by becoming a part of Islamic Caliphate) it has no chance of surviving independently because otherwise India is going to assimilate it in due course of time.

Therefore SaAr should realize that Qureshi [not an ordinary Muslim but who bears the name of the tribe of Prophet Muhammad (Quresh) which as per Islam reserves the first right to lead the Caliphate of Muslims] is appealing to two powers namely religion and military (saints and warriors, the combination of which has shaped the entire history of mankind). Whereas SaAr is trying to achieve its objectives by relying merely on money power (the petro-dollars which has already lost its earlier attraction for Pakistan as SaAr, as per Asseri himself, is presently finding it difficult to maintain it and secondly powerful China has become another source of money for Pakistan).

As far Muslim support for SaAr due to Mecca & Medina on its soil, it has lost its sheen because (i)- New alliance of Turkey, Pakistan, Iran, Qatar, Malaysia etc are already talking about converting Mecca & Medina into like another Vatican of Christians at Rome which will be separate and free from SaAr (ii)- SaAr along with its allies UAE etc has lost its reputation in Muslim world by accommodating Israel on chronic & gory Palestine issue against the interests of Muslims.

SaAr (through Asseri article) has also tried to convince Pakistan that SaAr is supporting its protector China in its projects of CPEC & Gwadar Port in Pakistan and the BRI in addition to being the largest exporter of oil to China. But SaAr is not trying to understand that when the battle lines will be drawn between liberal secular democracies on one side and authoritarian communist regimes in league with  theocracy on other side then China will certainly like to side with new Muslim formation of Pakistan, Turkey and Iran [which all have strong military (even nukes) unlike SaAr and its allies].

It does not mean that there is an hopeless situation for SaAr rather it can still come out of this problem as given below:-

(1)- First and foremost, SaAr should realize that after the rise of China this is not the same world. When SaAr is allying with the West led by the USA then sooner or later it also will have to adopt secular democracy because it can’t sail in two boats at the same time. Especially when the West is getting sensitive over the sanctity of political ideology after Corona-pandemic as authoritarian communist regime of China is perceived by the West to be responsible for this pandemic. Hence SaAr  can easily come out of its present problems by taking interest in the developing reality of  Indian subcontinent where India has no other relief from China problem than to usher into new political model by amending its Constitution where President & vice-President of Greater India will be nominated by the USA & UK respectively and the Rajyasabha of Greater India will be converted into like of House of Lords of UK,  as mentioned at https://www.pakistanchristianpost.com/opinion-details/3650 . But the USA, UK and India needs someone to push them towards this new political model in Greater India

(2)- Incidentally, Jared Kushner is presently the most powerful person on earth not merely because he is the son-in-law of Prez Trump but also because he is a Jew who is doing maximum to serve the interests in Israel of the Jews (who due to their financial prowess have huge influence over the West and even on Modi’s India). Moreover Jews / Israel  know that whatever they may do (like shifting capital to Jerusalem, century deal, friendship between Israel & UAE etc) by taking support of some Muslim countries like SaAr etc but unless Palestinians are rehabilitated in one State of Israel - Palestine there can’t be permanent peace for Jews / Israel. This is the main worry of Kushner because the Palestinian cause is being supported by formidable new Muslim Alliance who on this issue are getting support from entire Muslim Ummah of both Shia & Sunni Islam. Hence Kushner has legitimate interest in said Greater-India project / mission. Even if Trump loses the Presidential election 2020 Kushner has more than two months to carry-out this mission in Greater India and which is a long and adequate time in politics especially to provide irreversible momentum to this mission.

It is hoped that Saudis will use the services / help / assistance of Jared Kushner for mobilizing the USA, UK and India in ushering Greater India (Pakistan, Bangladesh and Bangladesh) and ultimately the ‘Union of Secular Democratic Federal Extended SAARC’ into the said new political system which will facilitate immensely in solving the problems of not only SaAr but also of Jews / Israel and of liberal secular democratic world.